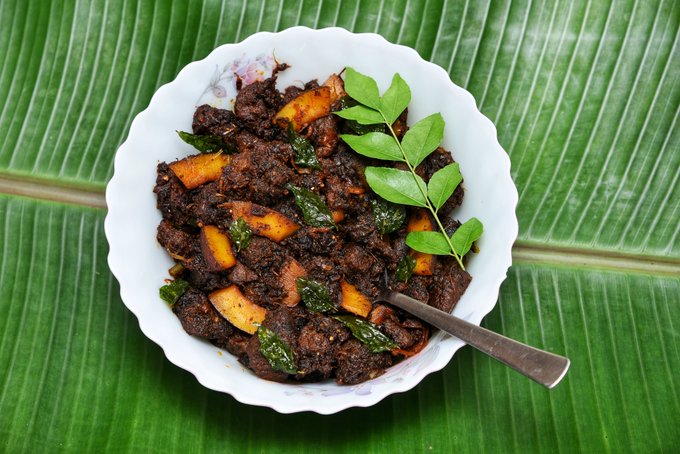 A post by Kerala's Tourism Department on beef recipe has sparked a row over the consumption of cow meat, leading to the state government clarifying it did not intend to hurt anyone's religious sentiment.

Kerala Tourism's Twitter handle shared a recipe for the "most classic dish, Beef Ularthiyathu" on Makarasankranti day (January 15), which kicked up a storm with social media users asking "promotion" of pork as well.

Tourism Minister Kadakampally Surendran said, "In Kerala, no one links food with religion. The government does not have any interest in hurting religious belief of anyone. Giving communal colour to this is condemnable."

Tender chunks of beef, slow-roasted with aromatic spices, coconut pieces, and curry leaves. A recipe for the most classic dish, Beef Ularthiyathu, the stuff of legends, from the land of spices, Kerala: https://t.co/d7dbgWmlBw pic.twitter.com/aI1Y9vEXJm

Regardless of the intention of the CPI(M)-led LDF government, several Twitter users saw the post as an attack on the religious belief of Hindus, especially because Makarsankranti day is a Hindu festival celebrated as Pongal, Bihu and Lohri in different parts of the country. Many also trolled the government.

Surendran said those trying to communalise the matter were the ones who were creating a controversy by saying that pictures of pork dishes should also be uploaded by the department.

"Many dishes, including pork pictures, are already on the website, they might not have seen," he said.

The Kerala Tourism's website has a section on food, which contains various kinds of recipes including those with mutton, lamb, beef, pork, fish and chicken.

The central government announced a nationwide ban on cow slaughter in May 2017. But it is still legal in Kerala, West Bengal, and most of the Northeastern states.

Welcome to Karnataka to bring out the Vegetarian in you ðÂÂÂÂÂÂÂÂÂÂÂÂÂÂÂÂÂÂ.

Kerala has been at the centre of controversy over beef earlier as well. When cattle slaughter was banned by the BJP-led government in 2017, political parties led protests in the southern state by holding beef festivals.