‘Punjab needs a stern, decisive, inclusive and compassionate leadership to fulfil genuine demands of every Punjabi,’ Navjot Sidhu stated in a letter he handed over to Amarinder Singh 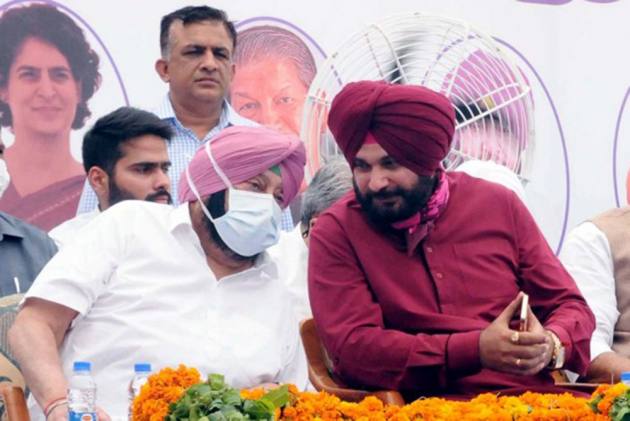 Days after he took over as president of the Punjab Congress after a bitter feud with Captain Amarinder Singh, Navjot Singh Sidhu met the chief minister, on Tuesday, along with the four newly appointed Punjab Congress working presidents, to outline five demands from the state government. It is evident that the garrulous Amritsar East MLA, who has been at loggerheads with the Punjab CM over ‘unfulfilled’ poll promises of his own party, hasn’t softened his stance after taking over the reins of the party in the state that will go for assembly polls early next year.

“Today, Punjab needs a stern, decisive, inclusive and compassionate leadership more than ever before to fulfil genuine demands of every Punjabi,” Sidhu has said in the letter he and the four Punjab Congress working presidents handed over to the Captain. The new PCC chief, who has been meeting party MLAs and workers for the past fortnight to discuss various issues regarding the state government’s performance over the past four and a half years and the Congress’s poll preparedness for next year said he was writing to the CM “after multiple deliberations and consultations with party workers across Punjab to understand the public sentiment.”

Sidhu has outlined “five priority areas that the government must act upon immediately”, the foremost of which is “justice for Punjab’s soul by punishing the main culprits behind sacrilege of Guru Granth Sahib Ji and police firing incidents at Kotkapura and Behbal Kalan”. The state government’s inertia in bringing the politically emotive sacrilege and police firing cases of 2015 to a closure has been a major cause of friction between not just Sidhu and Singh but also several other Congress leaders in Punjab who have, overtly or secretly been critical of the Captain’s administration in recent months. The issue was also raked up by Sidhu’s predecessor, Sunil Jakhar, on July 23, at the installation ceremony of the new Punjab Congress top brass. Jakhar had said that the road to power in Punjab goes through Behbal Kalan and Kotkapura while lamenting the delay in the investigation of the sacrilege and police firing incidents.

The other demands raised by Sidhu and the four working presidents, Kuljit Singh Nagra, Pawan Goyal, Sukhwinder Singh Danny and Sangat Singh Gilzian – all critics of the Punjab CM – include immediate arrest of the “big fish behind drug trafficking in Punjab as mentioned in the Special Task Force report” and cancellation of the “faulty power purchase agreements” which were signed by the previous Akali-BJP government with private thermal power companies.

Asserting that agriculture is the backbone of Punjab, Sidhu has also told Singh that “as we all protest against Centre’s three black laws (the controversial farm laws), government of Punjab must not merely recommend amendments to a few clauses in the three black laws but reject them completely by announcing that they will not be implemented in Punjab at any cost.” Sidhu said that a stern resolve is needed to send across the Punjab government’s message to the Centre on the farm laws and that this needs to be done from the Punjab Vidhan Sabha.

Further, the Punjab Congress chief has also said that “more than 20 Unions (of teachers, doctors, nurses, safai karmcharis, etc.) are protesting across the state” and that the state needs a “compassionate leadership that is ready to listen and take steps for inclusive development”.

The Congress high command’s decision to anoint Sidhu as the party’s chief in Punjab despite protestations from Singh and a host of other senior leaders had surprised many political observers. Singh had initially asserted that he would not meet Sidhu until the former BJP MP offers a public apology for making personally derogatory attacks against him on social media. While Sidhu refused to apologise, Singh agreed to attend the installation ceremony of his bête noir. Accepting Sidhu as the Punjab PCC chief was a fait accompli presented to Singh by the Congress high command of Sonia Gandhi, Rahul Gandhi and Priyanka Gandhi Vadra. However, the central leadership, sources say, had assured Singh that Sidhu had been told not to embarrass the CM any further and work harmoniously with the state government. This, along with another assurance that Singh will lead the party into the 2022 polls as the CM and may stay on in the post for at least another year if the Congress retains Punjab had finally led the Captain to unilaterally announce a cessation of hostility with Sidhu.

Sidhu’s public posturing since taking over as the Punjab Congress chief, however, suggests that he is in no mood to go soft on the Punjab CM. The uneasy truce that the Congress high command had hoped to seal in Punjab is showing signs of strain already with Sidhu making it known that he does not believe that Singh has given a compassionate, inclusive and decisive government. The CM, on his part, is trying to be indulgent towards Sidhu’s antics for now but sources close to Singh concede that his patience may give away soon if the voluble PCC chief doesn’t tone down his attacks soon.