Mumbai's Sero Survey Reveals 57% In Slums, 16% In Other Areas Were Exposed To Covid

The sero survey started on June 3 and 6,936 samples out of an estimated 8,870 were collected from slum and non-slum population of three civic wards in the first half of July. It showed high proportion of asymptomatic COVID-19 infection in the city. 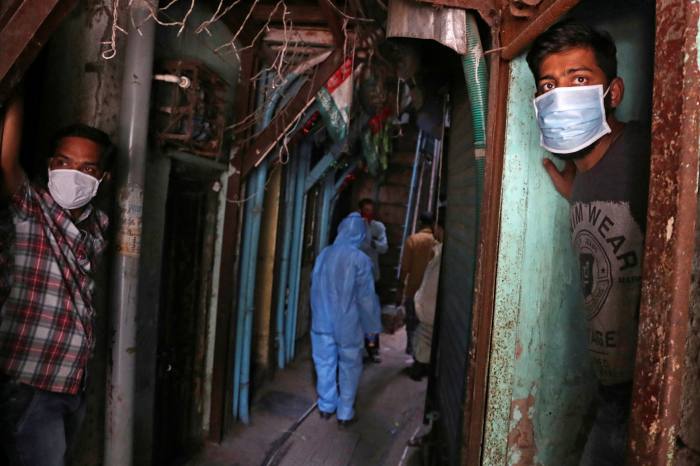 A sero-surveillance study done in Mumbai has revealed that 57 per cent of slum population and 16 per cent of non-slum residents in three civic wards had developed antibodies, indicating many people would already be affected by COVID-19 than the official tally suggests.

The sero-surveillance started on June 3 and 6,936 samples out of an estimated 8,870 were collected from slum and non-slum population of three civic wards - R-North, M-West and F-North - in the first half of July.

It showed high proportion of asymptomatic COVID-19 infection in the city.

The study revealed that 57 per cent of slum population and 16 per cent of non-slum residents in these civic wards had developed antibodies, the BMC said on Tuesday.

"These results will be valuable to learn more about herd immunity," stated a Brihanmumbai Municipal Corporation (BMC) release.

The civic body is going to conduct another survey that will provide information about infection spread and throw light on herd immunity as well, it said.

The Serological Surveillance for SARS-CoV2 infection was jointly commissioned by NITI Aayog, the BMC and the Tata Institute of Fundamental Research (TIFR).

A serological survey involves testing of blood serum of individuals to check for the prevalence of antibodies against an infection.

The study found high proportion of asymptomatic COVID-19 infection in the city.

The civic authorities claimed the sero surveillance result indicates that "asymptomatic infections are likely to be a high proportion of all infections".

"Although prevalence in women was marginally higher than men, age-wise prevalence in the population was comparable in these wards," the BMC said.

The BMC claimed that higher prevalence in slums could be possibly due to population density and shared common facilities like toilets and water points, the release said.

The civic body further claimed that although it is still unclear what level of prevalence leads to herd immunity, findings indicate that at least in slums this could be attained sooner than later, if the immunity exists and persists in a significant proportion of the population.

The civic body said the sero-surveillance survey also indicates that the infection fatality rate (IFR) is likely to be very low, in the range of 0.05-0.10 per cent.

"Lower prevalence in non-slums could be due to better social distancing and access to better hygiene in addition to interventions by MCGM (BMC) to stem the spread of infection," the BMC stated.

The BMC said together with relatively low prevalence in non-slums suggests that social distancing and related precautions such as wearing masks are effective in slowing the infection spread and should continue as a new normal in all sections of the society independent of prevalence.

The study was carried out in collaboration with organisations like Kasturba Molecular Diagnostic Laboratory, Translational Health Science and Technology Institute (THSTI), A T E Chandra Foundation and IDFC Institute.

Indian, Chinese Troops Complete Disengagement At Most Locations Along Border In Ladakh: China