The meeting at Haldia is his first electoral rally in the state after the BJP formally launched its state-wide Poriborton Jatra or the rally for change. 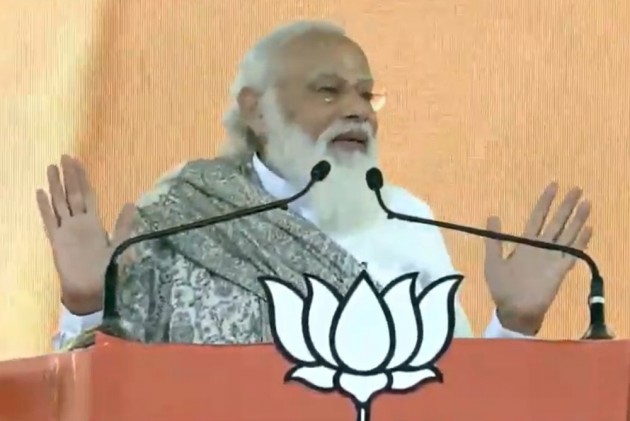 “Bengal only got Nirmamta (ruthlessness) in her 10-year rule,” he said while accusing the state government of staying busy with corruption and extortion instead of working for the people.

He also accused the state government of remaining preoccupied with blocking the central government projects that were to benefit the state’s people.

No Change In West Bengal, TMC Exact Replica Of Left Rule Except It Scaled Up Corruption: Harsh Vardhan

“Think of what injustice Mamata did by denying PM Kisan Samman benefits for so long. She agreed only after the farmers decided to punish her for this. What is her problem if the people of the state benefit from central government projects?” Modi asked.

The meeting at Haldia is his first electoral rally in the state after the BJP formally launched its state-wide Poriborton Jatra or the rally for change, which seeks to topple the Trinamool Congress (TMC) government in the elections expected to be announced soon.

The prime minister was in Haldia to inaugurate projects worth nearly Rs 5,000 crore, which he said will expand gas connectivity and road connectivity, build a flyover and also generate employment locally.

Modi said that the development of west Bengal and building new infrastructure in the state has been a consistent priority of the Central government.

“Mamata even gets upset with ‘Bharat Mata ki Jai’ slogan. But she never gets angry when anti-national forces spit venom on India, just like now we are recently standing witness to an international conspiracy to defame India globally. Did you ever hear a word from Didi against these international conspiracies against India?”

Hinting at Congress, though without naming the party, he said, “Those who got decades to govern India are silent, if not already part of the conspiracy.”

“India will give a befitting reply to the global conspiracy to tarnish her image,” Modi said.

He accused the Congress, the Left and the TMC of ruining Bengal’s fortune for over seven decades. “West Bengal was the most advanced state in the pre-Independence era. From infrastructure to income opportunities, other states were in competition with Bengal. It was also the hub of education and showed to the path to other states. The question is, why Bengal could not keep up to that standards?”

“All industries and infrastructure in Bengal require change, modernization. But why no new industrial project took place in the past 10 years?” he asked.

Since in the Bengal elections the Left-Congress alliance – which is trying hard to emerge as a strong third force despite poor Lok Sabha election performances – is expected to play a crucial role in defining the vote-share of the TMC and the BJP, Modi warned people against trusting the Left and the Congress in the fight against the TMC.

In the 2019 Lok Sabha elections, the TMC got a 43% vote share, against 40% obtained by the BJP, while the Left and Congress, which contested separately, bagged 7% and 5%, respectively. This time, they have joined hands.

He said Bengal did not see real change in 2011 – when Mamata Banerjee toppled the 34-year rule of the Left Front – and predicted that the ‘real change’ will happen in this year’s Assembly election.

“Bengal did not see a change in 2011 but saw a revival of the left with all the more power – meaning rejuvenation of all malpractices, corruption and political violence and the throttling of democratic space,” Modi said.

“The real change will happen this time.”

Modi had two events in Bengal today. The first a political rally and the second the government programme of inaugurating projects. At the second event, union petroleum minister Dharmendra Pradhan was also present.