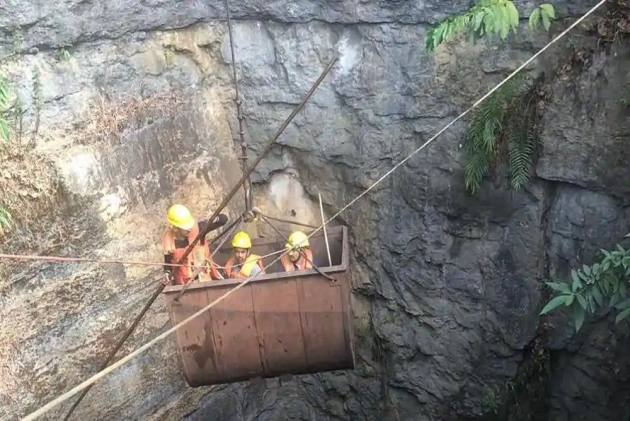 As rescue operation for the 15 miners trapped inside Meghalaya mine enters day 14, the officials on Thursday said that the chances for their survival seem grim and that only 'God's grace can help them to be alive'.

"Only God's grace and some miracle can help them to be alive," Kyrmen Shylla, Meghalaya’s disaster management minister, told Reuters by telephone from capital Shillong.

According to a report by the  NDTV, the Meghalaya government has said that they are worried about the lives trapped inside the mine as the drivers at the rescue site have reported a foul smell coming from inside the mine.

However, NDRF officials said that they are still uncertain whether the foul smell is coming from the decomposed or from the stagnant water.

"We are not certain whether the foul smell is of decomposed bodies as it could be from stagnant water, which has not been pumped out for three days," NDTV quoted NDRF officials as saying.

Reports say that the NDRF divers are waiting for the water level in the mine to fall from 70 feet to 40 feet, the level at which their divers can operate.

Around 15 miners went into the 370-foot deep mine and entered 'rat-holes' horizontal tunnels that just about fit one person each at a time.

According to media reports, all the 15 were minors who were illegally being used for entering rat-hole mines.

What are rat-hole mines?

Rat-hole mining involves the digging of narrow tunnels, usually 3-4 feet high, for workers to enter and extract coal. The horizontal tunnels are often called 'rat-holes', as only one person can enter through these mine at a time.

On Wednesday, Congress president Rahul Gandhi appealed to PM Modi to save the miners.

Taking to Twitter Gandhi said, "15 miners have been struggling for air in a flooded coal mine for two weeks. Meanwhile, PM struts about on Bogibeel Bridge posing for cameras".

"His government refuses to organise high-pressure pumps for the rescue. PM please save the miners," Gandhi tweeted.

His remarks come amid reports that the operation to rescue the 15 miners was hampered by the lack of equipment. The miners were trapped after water from the nearby Lytein river suddenly gushed into the pit.

A senior Meghalaya Home Department official has said the police force in East Jaintia Hills district, where the mine is located, do not have adequate personnel to deal with the problem.

Union minister Kiren Rijiju asked Gandhi not to do politics over the "tragedy", saying the Centre was helping the state government in its rescue efforts.

"14 days have passed since the Meghalaya miners have been trapped, while state and central governments are busy exchanging letters for rescue equipment. Why this lackadaisical approach?" he tweeted.

Congress' chief spokesperson Randeep Surjewala earlier said the miners were stuck in the difficult terrain in Jaintia Hills and water extraction should be swiftly expedited.

"Every minute is crucial. Belated response by Modi government notwithstanding, I join the nation in praying for their well-being and safety," he said.