Chief Minister Uddhav Thackeray said that a relief package will be announced soon — and a separate force on the lines of the NDRF will be set up in vulnerable districts to ensure a quicker response during natural disasters. 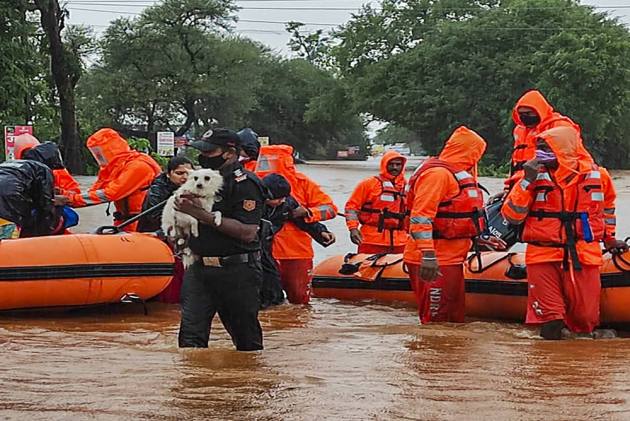 Rains continue to ravage most of south India, with Maharashtra being the worst hit in terms of loss of lives and infrastructure. The death toll in various rain-related incidents, like floods and landslides, in Maharashtra rose to 149 on Sunday with 36 more bodies being found in Satara and Raigad districts as rescue operations gathered pace. At least 64 people remain missing, the state government said. So far, 50 people have been injured in these incidents, it said in a statement. A total of 2,29,074 people have been evacuated from the affected districts in the Konkan region and western Maharashtra, to safer places.

A statement from the state secretariat control room said 28 more deaths were reported from the Satara district in western Maharashtra and 8 from the Raigad district in the coastal region. The government said 60 deaths were so far reported in Raigad, 21 in Ratnagiri, 41 in Satara, 12 in Thane, seven in Kolhapur, four in suburban Mumbai, and two each in Sindhudurg and Pune.

Union Minister Narayan Rane, however, expressed concern over what he alleged was the “lackadaisical approach” of the state government. “Where is the state government? Where are the state and district officials? People are helpless. But there is no help from the state administration,” Rane said after a visit to Taliye village in Raigad, where 49 people were killed in landslides.

A total of 875 villages in Kolhapur, Sangli, Satara and Pune were affected by the torrential rains, it said.

As the bridge over the Vashishthi river connecting Chiplun to Mumbai has collapsed, the road remains shut for the traffic.

Earlier in the day, Chief Minister Uddhav Thackeray visited Chiplun, the site of severe flooding, and interacted with residents, businessmen and shopkeepers. He promised them all help from the state government to restore normalcy in the area. He said that a relief package will be announced soon — and a separate force on the lines of the NDRF will be set up in vulnerable districts to ensure a quicker response during natural disasters.

Thackeray said they will require "central assistance for long-term mitigation measures", and added that he will tour western Maharashtra on Monday and comprehensive data of the extent of damages will be prepared.

Heavy rains earlier this week triggered landslides in some areas of Maharashtra including the deadliest one at Taliye village in the Raigad district.