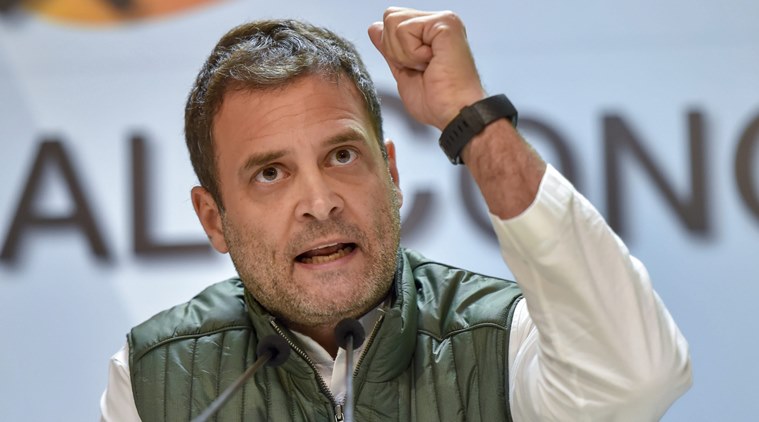 The Congress will release its manifesto for the Lok Sabha elections today.

The manifesto document will be released by Congress president Rahul Gandhi and top party leaders, including former prime minister Manmohan Singh, will be present at the party's Akbar Road headquarters in Delhi.

Gandhi has said that the manifesto will reflect the people's voice and not just one man's view. He has also said the manifesto will lay major thrust on jobs creation, addressing agrarian distress and strengthening the education and health sectors besides charting a roadmap to boost economic growth.

The Congress document is the result of extensive nationwide consultations and it will be a very "powerful" document aimed at redressing key challenges facing the nation, Gandhi said.

While Gandhi's promise of a minimum income guarantee - Nyuntam Aay Yojana (NYAY) - of Rs 72000 per annum to Rs 5 crore of India's poorest families has already generated much curiosity, the details of the implementation of the scheme will be laid out in the manifesto.

The manifesto is likely to focus on NYAY scheme, job creation and alleviation of farmer woes. In its manifesto, the Congress party is also expected to make some "big ticket announcements" on the social sector and on ways to bolster micro, small and medium enterprises (MSME).

It will also reiterate the party's commitment to ensuring early passage of the women reservation bill in Parliament. The bill which promises 33 per cent reservation to women in government jobs, as well as legislatures, was passed by the Rajya Sabha in March 2010 during the term of the Congress-led UPA-II government of Prime Minister Manmohan Singh. However, protests from the then BJP-led Opposition and some UPA allies had stalled its passage in the Lok Sabha.

The latest push for women's reservation comes at a time when Opposition parties like Naveen Patnaik's Biju Janata Dal and Mamata Banerjee's Trinamool Congress have decided to introduce women candidates in their lists of party candidates for the Lok Sabha polls.

Sources said that the manifesto is also likely to come up with some out of the box ideas on how MSME units will be helped to increase their business. The party's manifesto panel had discussed the possibility of whether Congress-led governments in the states can be asked to source products manufactured by MSME units. This was after the Congress president asked MP chief minister Kamal Nath to analyse whether his government can make khadi uniforms mandatory in the schools run by it and source khadi from small scale textile traders. The idea had come up during an interaction Rahul had with a small group of traders and young professionals from across the country two months ago.

Views of reputed economists on how to improve the state of India's economy have also been sought - NYAY was a result of this exercise, Gandhi has maintained.

The Congress had initiated a consultation process across the country and many of its top leaders had interacted with a host of people from different sections to seek their views on their aspirations from the party.