Home  »  Website  »  National  »  With Lockdown Spanner Into Lalu’s Release On Parole, Will Jharkhand Govt Go Out Of Way?

With Lockdown Spanner Into Lalu’s Release On Parole, Will Jharkhand Govt Go Out Of Way?

RJD chief Lalu Prasad Yadav, who is in jail since December 2017, has been undergoing treatment for various ailments for the past many months 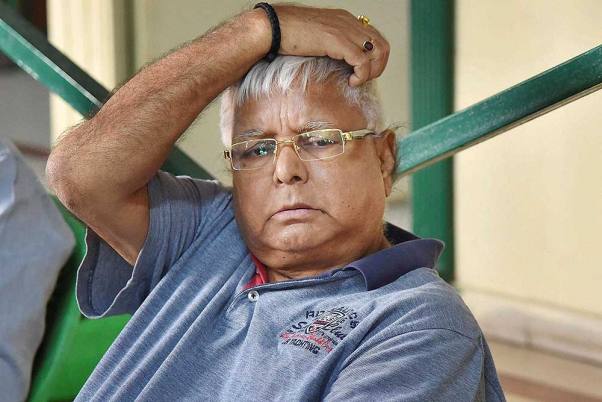 File photo of former Bihar chief minister Lalu Prasad Yadav who has not been keeping well for the past many months
Giridhar Jha April 17, 2020 00:00 IST With Lockdown Spanner Into Lalu’s Release On Parole, Will Jharkhand Govt Go Out Of Way?

Supporters of the incarcerated Rashtriya Janata Dal president Lalu Prasad Yadav are a disappointed lot, as the possible release of their leader from Ranchi prison on parole is getting delayed by the day, apparently due to the nationwide lockdown.

There is no word yet as to when exactly will the Hemant Soren government in Jharkhand, which is keen on setting him free on health grounds, take the final decision in this regard.

The 71-year-old leader, convicted in multiple cases of the animal husbandry scam, has been in jail in Ranchi since December 2017. For the past many months, he has been undergoing treatment for various ailments, including heart and kidney problems, at Rajendra Institute of Medical Sciences (RIMS) in the Jharkhand capital. Although he is learnt to have not submitted any application for his release on parole so far, the Soren government has reportedly taken a move in this regard due to outbreak of the coronavirus pandemic. It has already sought the views of the legal department but its final decision is still awaited.

As of now, even as Lalu’s anxious family and followers are keeping their fingers crossed, Jharkhand’s prison department is learnt to have written to RIMS to shift Lalu to another ward within the hospital premises apparently in view of the infection threat to elderly patients with serious health issues. The paying ward where he is at present lodged is said to be close to the coronavirus isolation ward at RIMS. The state officials obviously do not want to take any chances.

As far as his parole is concerned, the Soren government apparently thinks that Lalu fulfils all the criteria laid down for the release of a prisoner on parole and may be allowed to go home for a certain period on health grounds. Sources, however, say that the extension of lockdown till May 3 has delayed the release process. Owing to the restrictions imposed during the ongoing lockdown, the RJD president may not be able to travel to Patna by road in any case. Initial reports had suggested that the Soren government might provide a chopper or an air ambulance to shift him to Bihar but it too apparently has been put on hold, given the fact that a move is now already afoot to shift him to another ward.

Political observers believe that the Soren government will not be able to duck the salvos of the opposition parties if it goes out of its way to provide any special facilities to Lalu, who has been sentenced to a minimum of 14 years on corruption charges by a special CBI court.

Lalu, on his part, has been putting up a brave face, asking people to stay home through his official Twitter handle, being operated by his close associates during his absence. “Satark Bihari lega takkar/corona bhagega dum dabakar (Alert Bihar will take on coronavirus and compel it make a retreat),” he posted a couplet in his inimitable style, while exhorting people to stay safe at home.

Even though Lalu has not been keeping good health for quite some time, his return may well infuse a fresh lease of life into his party, being led at present by Tejashwi Prasad Yadav. His youngest son had recently spoken to Hemant Soren expressing concern over the health of his father following the corona outbreak. It had prompted the Jharkhand government to mull ways for Lalu’s release at the earliest. Sources say that if all goes well, he might be released in the days to come. Whether it happens during lockdown or after it ends is not clear, though.

Bihar is scheduled to go to polls later this year and Lalu’s release on parole at this juncture is expected to boost the morale of his party cadres in the state, where RJD has failed to return to power since its defeat by the Nitish Kumar-led NDA in November 2005.