Irrespective of the party in office at the Centre, there has been no let up in the imposition of Hindi across the country 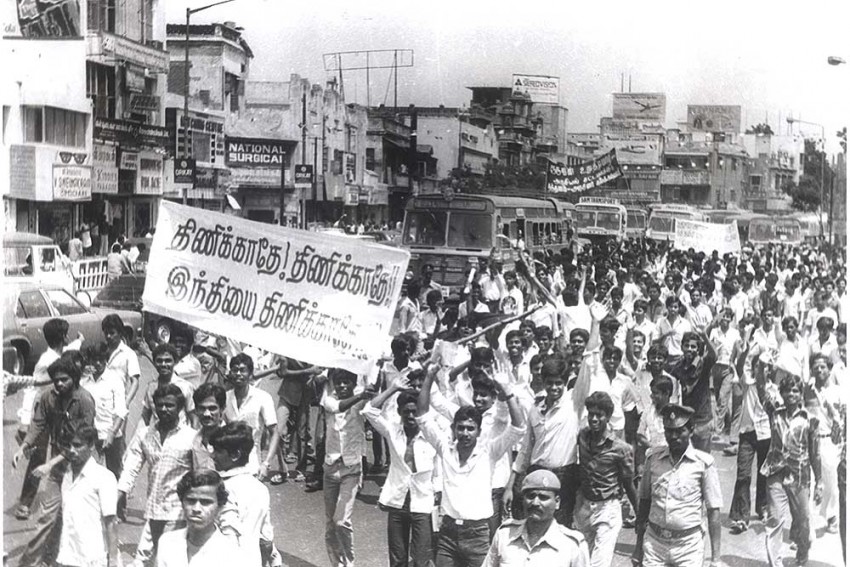 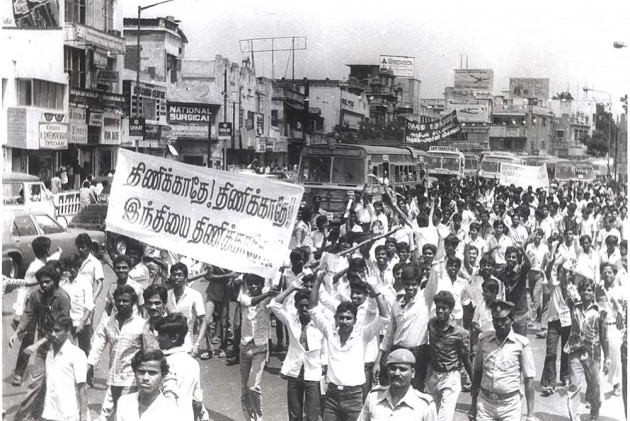 That explains why DMK MP Kanimozhi’s demand on August 22 for suspension of AYUSH Secretary Vaidya Rajesh Kotecha—for reportedly asking participants not knowing Hindi to leave a training session organised by the ministry—has not drawn the expected response from either the Centre or the public. Worse, her objection to Hindi imposition and the discrimination by Central officials against non-Hindi knowing participants in national programmes, which effectively excludes non-Hindi participants, failed to strike a chord—as it should have and did in the past—among other non-Hindi states.

Some 10 days prior to this conduct of a Union Secretary, Kanimozhi was stung viciously by a Hindi bug nestling lower in the official food chain. A CISF official at the airport asked her if “she was an Indian” when Kanimozhi asked her to speak in English or Tamil as she did not know Hindi.

“I would like to know from when being Indian is equal to knowing Hindi,” Kanimozhi remarked.

This conflating of Hindi with Indian as implied by the CISF official—and in the explicit exclusion by a Union Secretary of non-Hindi people from a Central training programme—is a trend that has intensified since 2014 when the BJP formed the government at the Centre. Tamil Nadu is not surprised at the BJP pushing Hindi down the throats of people—it is in the nature of the party. What Tamils find shocking is that now this comes naturally to the Union Government and its agencies and officials as well.

Irrespective of the party in office at the Centre, there has been no let up in the imposition of Hindi, even after Jawaharlal’s Nehru’s assurance to Tamil Nadu and the anti-Hindi movement banishing the Congress from government in the state. On the other side, whenever the DMK or the AIADMK has been part of a coalition at the Centre, anti-Hindi protests have been muted and the creeping Hindi imposition quietly swept under the carpet.

The difference since 2014 is that the BJP makes no secret of it being a Hindi party and unabashedly pushes ahead with Hindi imposition. That is one reason for opposition to Hindi gaining ground. Another reason is that the BJP is also perceived to be anti-English. Nothing gets the goat of the Tamils as much as the party’s anti-Englishism combined with its equating Hindi with being Indian.

Soon after Prime Minister Narendra Modi took office in 2014, on May 27,a Union Home Ministry diktat made it compulsory for all ministries, departments, corporations and banks to post information and comments on social media sites in Hindi. This provoked a dam burst of protests in Tamil Nadu, and elsewhere, too. Parties across the spectrum, from the ruling AIADMK to the DMK and BJP allies MDMK and PMK, made it plain that any attempt to impose Hindi would be resisted. The CPM and National Conference also joined the protests against the order.

MDMK’s Vaiko, who had praised Modi during electioneering, warned the Centre: "Don't rouse a sleeping tiger. Hindi imposition is a threat to national integrity”, and recalled how “Tamil Nadu has spilled blood against the imposition of Hindi in the past."

Then 89-year-old DMK chief M Karunanidhilashed out at the Centre for “treating all non-Hindi speaking people as second class citizens”, and said that the “language battlefields have not yet dried”.

None of this deterred the BJP from persisting with its Hindi agenda. The next big milestone in Hindi’s untrammelled march was, within a week of Modi Sarkar’s re-election, the draft New Education Policy 2019 released on May 31. The NEP wanted Hindi to be made a mandatory third language in schools. The Hindi-centric recommendation came from an expert panel headed by former ISRO chief K Kasturirangan.

The proposal triggered anti-Hindi protests, including in states other than Tamil Nadu. Even a BJP ally as subservient as the AIADMK opposed it with Tamil Nadu Education Minister KA Sengottaiyan declaring that the state will shun the new policy. "Tamil Nadu will follow only two-language policy,” he said.

A week earlier, just two days after BJP’s victory, DMK General Secretary M K Stalin said, “Gone are the days when it was believed that only Hindi-speaking states make India”.The DMK won 37 of the 38 Lok Sabha seats for which elections were held.

Stalin’s has proved to be a cry in the wilderness. The BJP has remained unfazed by successive outbreaks of anti-Hindi protests—it knows that people will weary of these protests and persistence in pushing Hindi will pay off eventually.

Such conviction explains Union Home Minister Amit Shah rooting for Hindi as the national language just a few months after the furore over the draft NEP. Less than a year after that comes Kanimozhi’s Indian-ness being questioned because she doesn’t know Hindi followed by not just ‘Hindi only’ in a Central training module but active exclusion of those who do not know the language.

Yet, there is none of the outrage or uproar witnessed in the past when the BJP sought to thrust Hindi on the non-Hindi states and people. To a large extent, the lack of response may be attributed to the crisis created by the Covid-19 epidemic. Its disastrous economic fall-out, heavy rain and floods disrupting life and displacing millions, and crores of people uprooted, jobless and in distress fighting a grim battle for sheer survival may all be reasons for the palpable indifference to the issue this time.

Even so, unlike past governments at the Centre, Modi Sarkar is not even making a show of pacifying those agitated over Hindi imposition or denying for the sake of form that such a project is zealously underway.

Kanimozhi is right and has struck the right note in the issues she has raised. She has also been heard in quarters that matter. However, the Centre, undeterred by Tamil sentiment, seems firm on staying the course. As for the people, they may make their point in the state election in May 2021.