BJP and RSS’ statements about protecting women are ‘hollow’ because they do not respect women, Congress leader Priyanka Gandhi said 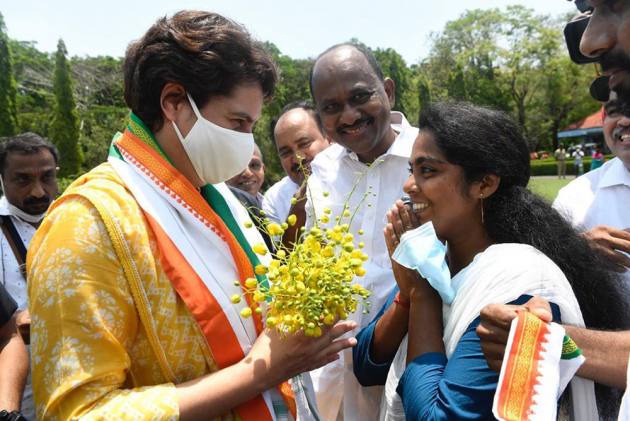 Congress general secretary Priyanka Gandhi Vadra on Tuesday hit out at the BJP over the issue of women’s safety.

Lashing out at Union home minister Amit Shah, the Congress leader said the former had raised his voice in support of a group of Kerala-based nuns, who were harassed during a train journey in Uttar Pradesh, only because Assembly elections are around the corner in Kerala.

Vadra was referring to the case where two nuns and two novices belonging to a Kerala-based congregation were forcefully asked to deboard an express train in Uttar Pradesh’s Jhansi by members of the Akhil Bharatiya Vidyarthi Parishad (ABVP) after local Bajrang Dal activists allegedly complained that the two women were allegedly conducting religious conversion, earlier this month.

Addressing a rally at Karunagapally in Kerala’s Kollam district, Vadra said, "It's election time. That's why when the sisters (nuns) were taken off a train in Jhansi and harassed by their own people, the Union minister made a comment saying it's wrong. The rest of the time, they fully encouraged this sort of behaviour."

"Who gave the men of the BJP youth wing permission and authority to harass women on a train? Who gave them the right to check the identity papers of the Nuns and two girls with them. Who allowed them to ask what their religion was? Are we to believe that in our country women cannot take a train without being harassed by someone and she is answerable to some goons about what she stands for and what she believes in?" she asked.

The Congress leader said she had spoken on the phone to the nuns and they told her that they were worried.

They were pulled out of the train, they were afraid and there was nobody to protect them, she said adding when the BJP and the RSS make "hollow" statements about protecting women, it's a "farce because they don't respect women".

Except during election time, when they want women's votes, they spend all their time telling women what to wear, how to dress, how to work, where to go and how to go there, Vadra further said.

"Their ministers’ comment on women's jeans…One of their ministers said there should be a law that when women leave their districts, they should register with the police, so that they will be safe. As if women are not capable of looking after their own safety," said Vadra, who is on a two-day visit to Kerala.
Urging the women voters not to allow any politician to take them for granted, she said BJP does not respect a woman's identity.

Describing the BJP government at the Centre as "weak", Vadra said they cannot even tolerate a joke and get a comedian arrested even before he has lampooned them.