The protesters, residing in various cities of Delhi-NCR, covered their mouths with black ribbons and carried placards during the protest at Jantar Mantar Road. 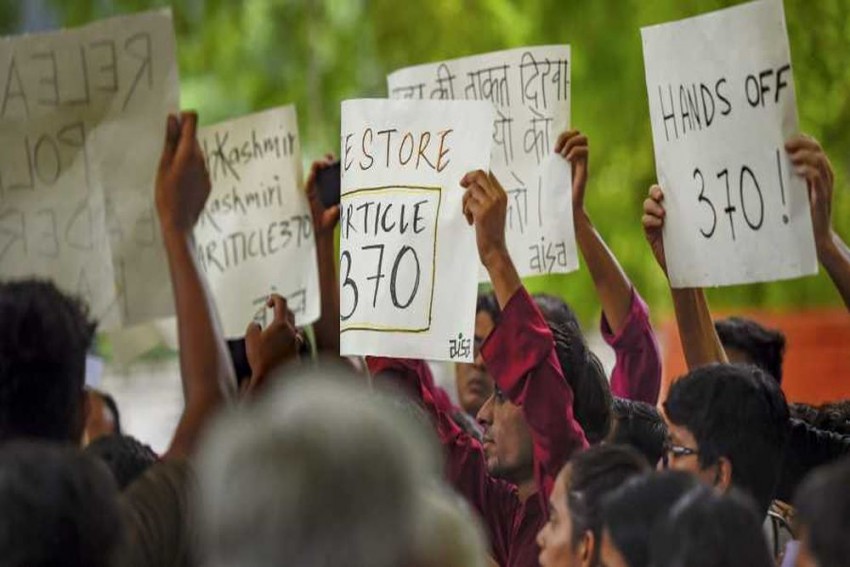 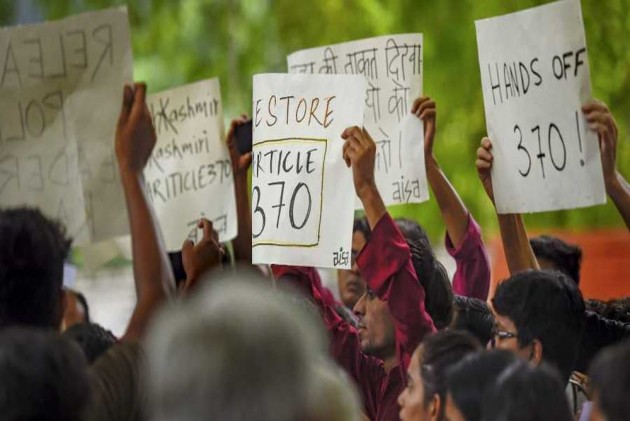 Students and professionals hailing from Jammu and Kashmir staged a demonstration in the national capital on Friday to protest against the scrapping of Article 370 and asked the Centre to lift the restrictions in the state.

The protesters, residing in various cities of Delhi-NCR, covered their mouths with black ribbons and carried placards during the protest at Jantar Mantar Road.

Dozens of students from Delhi University, Jamia Millia Islamia, JNU and other educational institutions in Delhi as well professionals took part in the protest.

"We have not been able to talk to our families for the last 4-5 days. Our immediate concern is the well being of our families living under curfew in the state," said St Stephen's College student Qamar Chaudhary, who hails from Poonch.

One of the organisers, Faiq Faizan said lifting "communication blockade" in the state is one of the primary demands as most of the those living in Delhi-NCR and other parts of the country have been unable to talk to their families back home due to "severe" restrictions in place.

The clampdown in Kashmir was imposed on Monday, hours before the Centre revoked Jammu and Kashmir's special status.

Security forces have been deployed in massive numbers across the Valley, particularly in Srinagar city and major towns, and barricades have been erected every 100 metres. The only people allowed to pass are those with medical emergencies.

The protesters also demanded freeing elected representatives "detained" in Jammu and Kashmir and ensuring safety of students and professionals from the state settled in Delhi and NCR cities.

The human rights and democratic principles have been "endangered" in the state which is why this protest is demanding lifting of restrictions, said Delhi-based clinical psychologist, Sharika, hailing from Anantnag.

A masters student from Delhi University, Sofia, expressed her opposition to the scrapping of Article 370 by the Modi government.

"This constitutional provision was there to extend protection to the people of Jammu and Kashmir. Resentment among them is natural which can not be curbed through restrictions," she said.

After Samjhauta, Pakistan To Stop Thar Express Over Abrogation of Article 370