Even after Karunanidhi’s departure in 2018, his first family, led by his son M.K. Stalin, tightened its hold on the party as more of his family members became power centres. 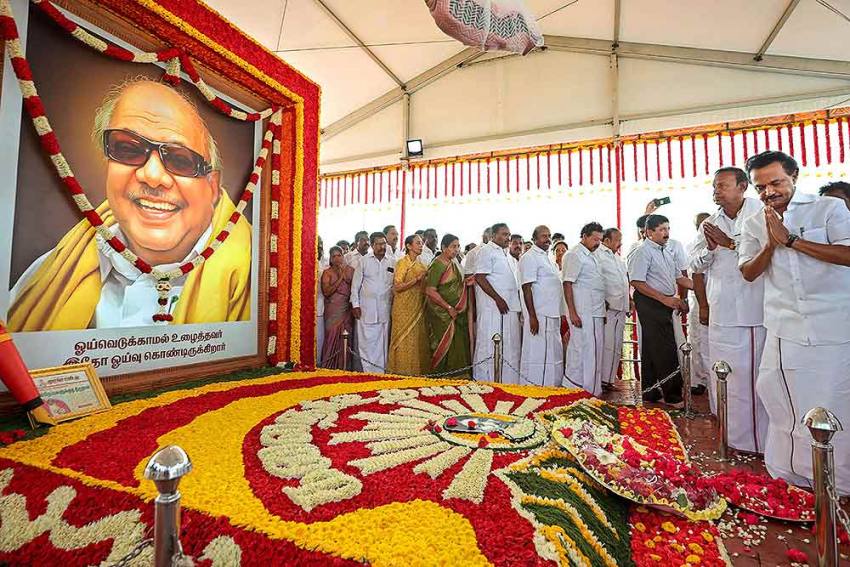 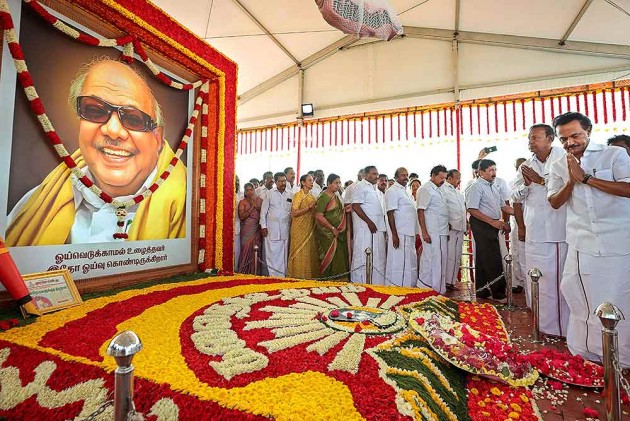 As the DMK observed his second death anniversary on Friday, the long shadow of Muthuvel Karunanidhi continued to cast its spell on the party and its politics of perpetuating familial rule.

Even after Karunanidhi’s departure in 2018, his first family, led by his son M.K. Stalin, tightened its hold on the party as more of his family members became power centres. Stalin’s son, Udayanidhi Stalin, essentially a film producer and actor, got promoted as the youth wing secretary of the DMK in July 2019, thus defining the new ruling hierarchy.

The father son duo of Karunanidhi-Stalin was swiftly replaced by the new dual power centre of Stalin-Udayanidhi. The growing clout of Udayanidhi could be seen in the manner in which DMK members from his youth wing got elevated as key functionaries of the party. For example, after the demise of DMK MLA and district secretary J.Anbazhagan due to Coronavirus, Udayanidhi ensured that his loyalist Sittrarasu was appointed to the party post, ignoring the claim of much senior and sitting MLA K.K. Selvam. A miffed Selvam then went ahead and joined the BJP, causing much embarrassment to the DMK and its leadership.

The DMK’s senior leaders, who owed their raise to Karunanidhi during his long innings as party president, and readily accepted Stalin as the successor after Karunainidhi’s demise, are now uncomfortable that their future role in the party would now be decided by the much junior and inexperienced Udayanidhi. Many of them apprehend that the MLA tickets for the 2021 Assembly elections would be decided mostly by Udayanidhi and Stalin’s son-in-law, Sabareesan, and most of the candidates would be from the DMK’s youth wing. “Udayanidhi wants to have his own army of loyalists as district secretaries and MLAs so his succession would be ensured,” said a former DMK Minister.

Even Karunanidhi’s daughter and Lok Sabha MP Kanimozhi finds herself sidelined by Udayanidhi, though she is much more senior in the party and has greater parliamentary experience as a Member of Parliament from 2007. Though she heads the women’s wing, Udayanidhi has been permitted to float a young women’s wing as part of the youth wing that he commands. When Kanimozhi, as the MP representing Thoothukudi, was at the forefront of the agitation against the death of Jayaraj and his son Bennicks in the custodial violence at Sattankulam, Udayanidhi drove all the way from Chennai to meet their families for a photo opportunity and just to make his presence felt.

Karunanidhi’s ideology continued to dictate the DMK’s political journey during the last two years as the party stood steadfast on the issue of social justice and the slightly outdated two language formula. The party, however, is deliberately drifting away from Karunanidhi’s anti-Hindu views as it wants to prevent Hindu consolidation against the DMK in the state. With the BJP raising its anti-Hindu pitch against the DMK and Rajinikanth’s imminent arrival with his brand of spiritual politics, the DMK might silently junk something that Karunanidhi always enjoyed – taking pot shots at Hinduism and its symbols.