Expanding his Cabinet will be the first big challenge before Karnataka CM Basavaraj Bommai as he will have to navigate maintaining a balance between various factions of the ruling BJP. 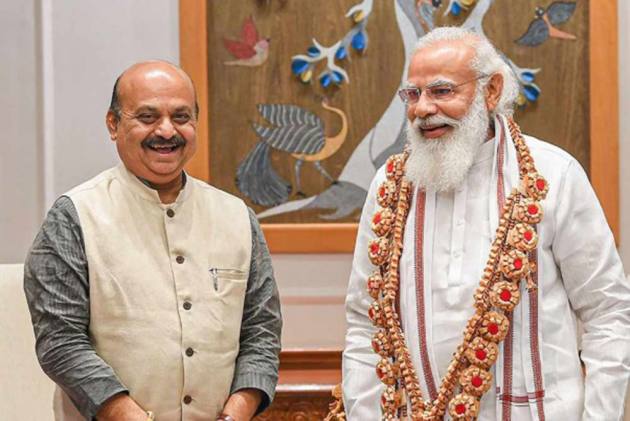 The expansion of the Karnataka Cabinet is likely to occur within the next week, Chief Minister Basavaraj Bommai said on Friday after he met Prime Minister Narendra Modi and the BJP central leadership in Delhi.

"We will get the nod within the next week. I have not discussed the list of probables but mentioned the need for an early decision on this issue," he told reporters while adding that he may visit the national capital again very soon and that he has sought time from the BJP high command for holding talks.

"We discussed the state political situation. He (Nadda) told me to strengthen the party in the state. There should be a coordinated efforts to face several polls from local body elections to by-polls," Bommai said on Friday. Assembly elections in Karnataka are due in the first half of 2023.

Expanding his Cabinet will be the first big challenge before Bommai as he will have to navigate maintaining a balance between factions within the ruling BJP. There are several aspirants among the party old guard, and legislators who had joined the BJP after quitting the Congress-JD(S) coalition in 2019.

Bommai also made it clear that his government will not be a rubber stamp. "No Bommai stamp or rubber stamp, my administration will have only the BJP stamp."

At his meeting with Prime Minister Modi, Bommai said he updated him about the Covid and floods situation in detail for about 35 minutes.

"I discussed vaccination shortage in the state. The prime minister has assured full support," he said, adding, "He (Modi) told me to give a better and clean government, which the party is expecting and accordingly asked to take decisions".

On the Covid situation in the state, Bommai said that prime minister asked him to take measures to control the spread of the disease taking note of the rising cases in neighbouring Kerala.

"I informed him that a direction has been issued to district collectors (DCs) and superintendent of police (SPs) of bordering states for better monitoring and control of the covid situation," he said.

The DCs have been told to increase the testing facilities and strengthen the health infrastructure in bordering districts, he added.

The new chief minister also hosted a lunch at Hotel Ashoka for all state MPs. Around 24 MPs from both the Lok Sabha and Rajya Sabha were present. However, some Congress and JDS MPs skipped the meeting.

At the meeting with the MPs, the chief minister said he asked them to identify gaps in the projects related to Karnataka and decided to involve MPs regularly for seeking central support for the projects.

"Many projects are stuck due to lack of coordination between the Centre and State government in terms of finance and implementation," he said, and urged MPs to make special effort to address the gaps and implement the pro-people central schemes.

The CM also said he would make the Karnataka Commissionerate in the national capital more "proactive and accountable".

At the meeting with the Jal Shakti Minister, the chief minister submitted proposals seeking early approval of DPR (Detailed Project Report) of the Mekedatu Irrigation Project over River Cauvery, early cabinet approval for making Upper Badra project and Yettinahole project as national project, green nod for the Kalasa Banduri Project among others.

Besides, the CM also announced setting up of a small working group in Bengaluru under a Additional Chief Secretary to fast track clearances of central projects. "Many more decisions will be taken in the coming days."

Asked what people can expect from his government, Bommai said, "A prompt, good and transparent governance. Timely implementation of projects. Pro-people and clean government."

After his Delhi visit, the chief minister said he will have video conference with the DCs and SPs of Kerala bordering districts and Chikkamagaluru, Dakshina Kannada, Udupi, Mysuru, Kodagu, and Chamarajanagar for taking measures to contain the covid spread.

"We are concerned about the rise in cases of Covid in Kerala," he added. Kerala accounts for nearly half of the country's Covid cases.