Sources told Outlook that BJP has reportedly offered Scindia a Rajya Sabha nomination from Madhya Pradesh and a cabinet berth at the Centre. 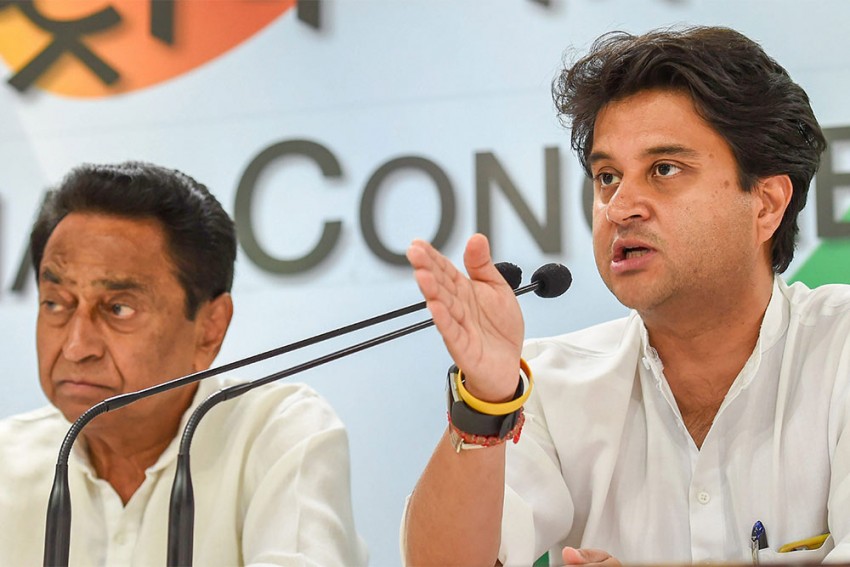 BJP leader Shivraj Singh Chouhan is likely to be made the Chief Minister again. BJP legislative party will meet in Bhopal later this evening where it will will elect Chouhan as it's leader, sources said.

Sources told Outlook that BJP has reportedly offered Scindia a Rajya Sabha nomination from Madhya Pradesh and a cabinet berth at the Centre.

Sources say if the Congress fails to pacify him, Scindia may announce a regional party on Tuesday itself, coinciding with the birth anniversary of his father, late Madhavrao Scindia. Madhavrao Scindia was a Congress stalwart who served as Union minister under different Congress regimes and was elected to the Lok Sabha for nine terms, without ever losing an election. In 1980, Madhavrao's defection to the Congress from the Jana Sangh - the BJP's earlier avatar co-founded by Vijayaraje Scindia - had helped the Congress consolidate its position further in the Gwalior-Chambal region and come as a major embarrassment to the Jana Sangh and Vijayaraje Scindia, the then Rajmata of Gwalior.

Meanwhile, Kamal Nath called for an all cabinet emergency meet on Monday night at the CM House.

There are speculations that Nath may ask all ministers to resign and announce a cabinet reshuffle to accommodate disgruntled leaders, give more weighty portfolios to Scindia loyalists and adjust some veterans like Bisahulal Singh, K.P. Singh, Surendra Singh 'Shera', etc. who were not inducted in the cabinet earlier.

The reports of Scindia's revolt coincided with as many as 17 Congress MLAs, including five cabinet ministers,  going incommunicado. Sources confirmed to Outlook that the MLAs, along with ministers Tulsi Silavat, Pradyuman Singh, Imarti Devi, Govind Singh Rajput, took a chartered flight to Bengaluru earlier in the day. They have also been accompanied by a close aide of the Congress leader.

However, six of the legislators returned to Bhopal over the weekend and asserted full support to the Congress government. The whereabouts of two Congress legislators - Hardeep Dang and Raghuraj Kansana - are still not known. Dang has also reportedly resigned from his membership of the MP assembly though Congress has denied it.

Both Scindia and Digvijaya are eyeing a Rajya Sabha seat from their home state. Additionally, Scindia has also been lobbying to be named the state Congress president with immediate effect - a position currently held by Nath. Digvijaya and his loyalists, who outnumber Scindia's in MP, do not want the MP Congress chief post to go to the Gwalior royal. Sources say Scindia has communicated to the Congress high command that his patience with the party is fast running out and his loyalty to the party which his father, late Madhavrao Scindia, had also served dedicatedly should not be taken for granted.

A close aide of Scindia told Outlook that the next 24 hours would be critical for the survival of the Congress government in Madhya Pradesh.

"If Scindia decides to form a regional party, or to join the BJP,  at least two dozen Congress MLAs would follow him. The BJP could then submit a no-confidence motion with the MP Assembly Speaker ahead of the forthcoming budget session. Though a floor test can not be sought in a budget session, mass resignation of Congress legislators would prove that Nath is running a minority government and his position is untenable," a confidante of Scindia said.

For the Congress, Scindia's defection could trigger a larger crisis too as it may encourage his contemporary from Rajasthan - deputy chief minister Sachin Pilot - to follow suit. Pilot's unease within the party, ever since he was overlooked for the chief minister's post in December 2018 in favour of old warhorse Ashok Gehlot, is common knowledge. Though Pilot continues to be Gehlot's deputy and also Rajasthan Congress chief, he wants a greater say in party matters and a position commensurate with that. Speculation about Pilot toying with the idea of launching a regional party in Rajasthan has been made several times over the past year.

Sonia's success - or failure - in winning over the sulking Scindia, in many ways, could thus start a fresh churning within the Congress. If Scindia's gets the assurances he seeks from the high command, Pilot and other whippersnappers like Milind Deora, Jitin Prasada, would want a similar new deal. If Scindia is turned down and decides to quit Congress, the other Young Turks too may want to explore their political options with greater urgency. All in all, it won't be a very Happy Holi for the Congress.