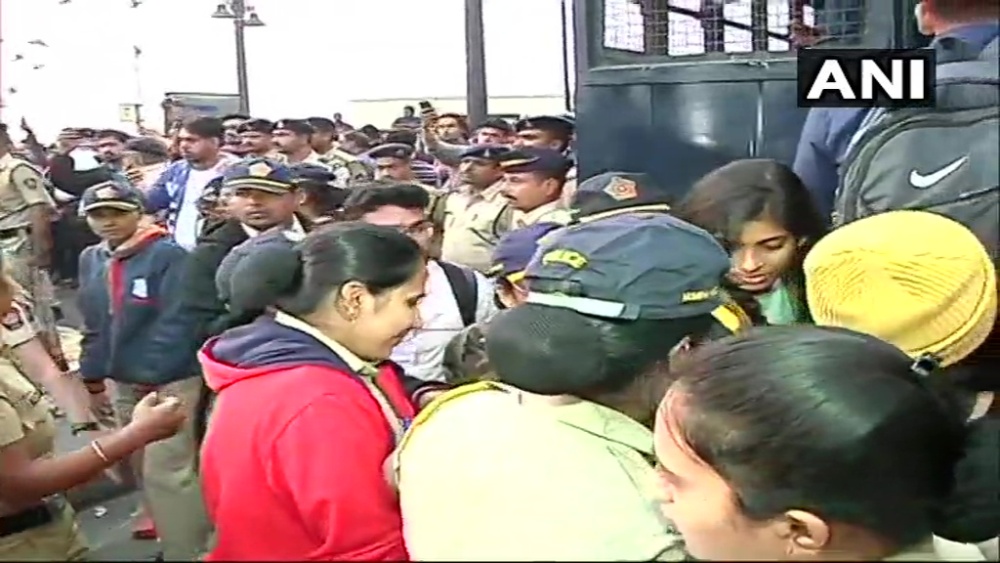 A large group of protesters, who had been demonstrating against the mob violence on Jawaharlal Nehru University campus for over 24 hours in front of Mumbai's iconic Gateway of India, have been moved to Azad Maidan, police said on Monday morning.

Sangramsingh Nishandar, DCP (Zone 1), said that roads were getting blocked and commoners and tourists were facing problems. "We had appealed to protesters many a time to move out; we have now relocated them to Azad Maidan," he said.

Mumbai: Protesters(protesting against #JNUViolence) at Gateway of India evicted by Police and relocated to Azad Maidan. (earlier visuals) pic.twitter.com/tSTB9rXiXb

With tambourines and guitars in their hands and songs of revolution on their lips, people protested against the attack on JNU students throughout Monday night in front of the Gateway of India and the Taj Mahal Palace hotel. They were joined by Bollywood celebrities like Anurag Kashyap, Swara Bhaskar and Vishal Dadlani.

Protesters, waiving the tricolour, raised slogans like ‘Kagaz nahi dikhayenge’ and ‘Tum kaun ho be'. They demanded the resignation of Modi and Shah.

Goons of the Akhil Bharatiya Vidyarthi Parishad (ABVP) attacked students by entering the women's hostel at the Jawaharlal Nehru University (JNU), the protesters alleged and demanded that the students' organisation be banned.

Slogans against Modi-Shah and their "tanashahi (dictatorship)" were raised by the protesters as they opposed the Citizenship (Amendment) Act, the National Register of Citizens and the National Population Register. They also brought up the issue of the Transgender Persons (Protection of Rights) Act, 2019, during their protest.

Heavy police deployment was made at the protest site and water, tea, biscuits and fruits were being served to protesters. Civic bodies made arrangements for toilets.

Earlier on Monday, protest were organised near the Hutatma Chowk at Fort, but later permission was denied.

A call was given that people join the protests in front of the Gateway of India. Demonstrations had started there after Sunday midnight.