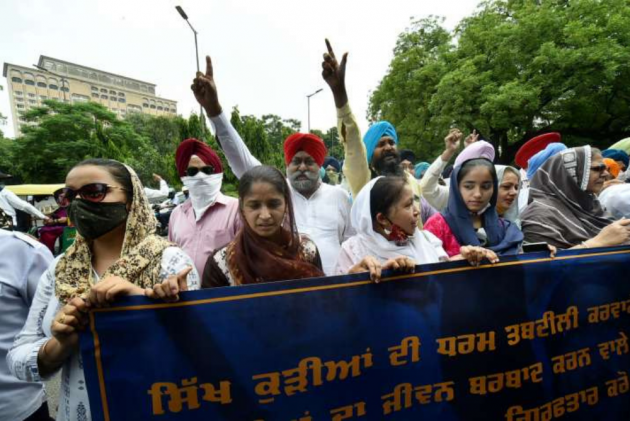 Following the recent controversy over the alleged conversion and marriage of two Sikh girls to Muslims, All Parties Sikh Coordination Committee, a Kashmir based Sikh organization, has called for implementing Inter Caste Marriage Act and Anti-Conversion Law in Jammu and Kashmir to avoid such controversies.

“The Sikh community in Jammu and Kashmir has been living in harmony with the majority Muslim community,” the APSCC said.

‘Recovered’ Sikh Girl Married Off In Her Own Community

“Since some unfortunate incidents came to the fore in the recent past it is important that both Muslims and Sikhs maintain the communal harmony and brotherhood. The people need to remain vigilant and ensure that the congenial atmosphere does not get vitiated. Since both the communities have supported each other through thick and thin it is the responsibility of members of both communities to continue with the synergy,” the Sikh body said.

Calling for Inter Caste Marriage Act to be implemented in Jammu and Kashmir, the community leaders said, once the Act is put in practice at this place the inter-caste marriages would come to an end automatically. “This would safeguard the interests of the people belonging to different faiths and religions. The elements who want to have mileage out of such marriages would also face an inevitable defeat,” APSCC said.

“Over the years members of elite political families of Jammu & Kashmir have been indulged in inter-caste marriage but surprisingly nobody pointed fingers towards them. Whenever such an incident happens in a normal family the issue gets blown out of proportion. This needs to be analyzed and people should be vigilant so that the opportunistic politicians don’t exploit them,” the Sikh body said.

“At the same time it is also important that Anti-Conversion Law is implemented in Jammu & Kashmir. This would stop the forcible conversion of people belonging to any religion whatsoever. Friction between the different communities would also come to an end once for all as a result. There would be no tensions between the communities and all the people would live without fear,” the APSCC said.

Since Saturday Sikh community in Kashmir has been protesting in the valley, alleging that two women were ‘kidnapped, converted and married’ in Srinagar.

Manmeet Kaur, a 26-year-old Sikh woman, and 29-year-old Shahid Nazir Bhat, both residents of Srinagar’s Rainawari, fled their homes on June 21.  After the woman's family filed a complaint, the police charged Bhat with kidnapping and abduction under section 366 of the IPC.

The couple surrendered before the police and subsequently were produced before the city judge Srinagar on Saturday.  Manmeet rejected her family's allegation that Bhat had kidnapped her and gave a statement in favour of Bhat.

But at the time of hearing of her case, over two dozen Sikhs lodged protests outside the City Court here seeking handing over of Manmeet Kaur. They alleged she was minor and had been abducted, forcibly converted to Islam and married off to a Muslim man.  That evening, Manmeet was handed over to her parents by the concerned police. Two days later, the family has married Manmeet to one Sukhbir Singh, with the decision of Panj Pyaaras. The marriage took place at 12 pm Tuesday.

The other Sikh woman at the centre of the ongoing controversy is 29-year-old Danmeet Kour, whose family alleges that she has been converted forcibly and married by Muzaffar Shaban, a Srinagar resident. But in the court, Danmeet refuted the family’s version and said that she has married Muzzafar aged 30 in 2014.

After hearing her version, the court ordered that Danmeet according to her wishes be handed over to her in-laws. Danmeet, in a viral video, said she married Muzaffar in June 2014 under the Special Marriages Act. “I converted to in 2012 and married in 2014. I am an educated and mature woman. I am aware of what my rights are under the constitution. I did marry him with my will because this is my fundamental right,” Danmeet said.

Danmeet has a master’s degree in political science and another degree in Public Administration from Indira Gandhi National Open University (IGNOU) and a Bachelors in Education. She runs her own education academy for the last five years in Srinagar.

Shaban is in detention in Srinagar under charges of abduction and is lodged in the Srinagar Central Jail for nearly a month now.