Home  »  Website  »  National  »  Cancel Every Booking Ahead Of Winter Games: J-K Govt To Hoteliers In Gulmarg

Cancel Every Booking Ahead Of Winter Games: J-K Govt To Hoteliers In Gulmarg

The hoteliers say the move has sent a negative message to travel agencies across India as they will now consider Kashmir as an unsafe and unreliable tourist destiny. 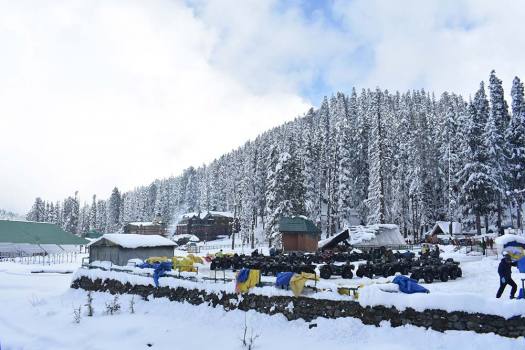 A view after fresh snowfall at the world famous ski resort in Gulmarg, Kashmir.
Umer Asif
Naseer Ganai 2021-02-12T12:47:56+05:30 Cancel Every Booking Ahead Of Winter Games: J-K Govt To Hoteliers In Gulmarg

Ahead of the winter games that are going to be held in Gulmarg, the Jammu and Kashmir government has issued a directive asking hoteliers to vacate even pre-booked rooms for the athletes participating in the Khelo India National Water Games.

The new directive has put the hoteliers in a difficult situation. They say all hotels up to March 31 are booked in Gulmarg and the government’s order would adversely impact tourism in the region.

The winter games are to be held in Gulmarg from February 27 to March 27.

The government has asked the sub-divisional magistrate of Gulmarg to ensure proper boarding, lodging facilities to athletes during the national games and cancel all pre-bookings. The hoteliers say the move has sent a negative message to travel agencies across India as they will now consider Kashmir as an unsafe and unreliable tourist destiny.

“We are booked up to March 31 and all of sudden you are asking us to cancel bookings for the winter games without realizing how it will impact the bookings,” says an hotelier pleading anonymity.

Besides, the hoteliers say the government has not given them rates. “They are forcing us to cancel our bookings saying we will throw you out and recover the hotels if you don’t comply with the directions,” said another hotelier. He said the government instead of understanding their issues and problems, are threatening them.

In 2019, the government issued notifications to at least 69 hoteliers mentioning that their lease agreement has ended and they would be acting as only "caretakers". There are only three hotels in Gulmarg including Nedoos, Khyber, which reportedly have lease rights up to 90 years. The government is not extending the lease to the hoteliers creating insecurity among them.

Former Chief Minister Omar Abdullah wrote on Twitter, "The games are a welcome addition to our calendar but its mindless application of government writ when the games become a reason to cancel hotel bookings & inconvenience tourists who have booked flights & made their plans well in advance."

When sought for a response, the secretary tourism department, Sarmad Hafeez didn't receive the call.