Canines To The Rescue: Indian Army To Deploy Dogs To Detect Covid-19

The dogs are being trained to detect Covid-19 by sniffing samples of sweat and urine. 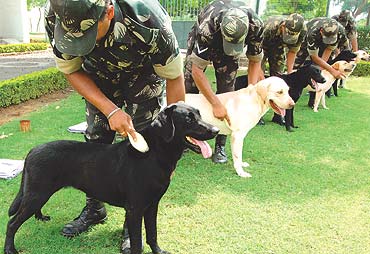 To minimise the time spent in diagnosing Covid-19, the Indian Army has for the first time ever, started using its dogs for quick detection of the virus.

According to army officials, two dogs, namely a two-year-old cocker spaniel Casper and one-year-old Jaya, a 'chippiparai, an indigenous dog from Tamil Nadu have been trained to detect Covid-19 by sniffing samples of sweat and urine.

The canine members of the armed force are known for their pronounced olfactory capability and have earlier helped in explosive and narcotics detection, search and rescue operations, and other challenging tasks. Now, they have another job.

How Covid-19 Based Innovations Can Help Us Fight Future Pandemics

A demonstration of their skills using real samples was held on Tuesday on the premises of the 48 Military Veterinary Hospital at Delhi Cantonment. Their handlers were wearing full PPE kits.

Lt Col Surinder Saini, the instructor at the Dog Training Facility of the Remount Veterinary Corps (RVC) Centre in Meerut, said these dogs are "pioneering canines" of not just the Army, but of entire India.

"Countries like the UK, Finland, France, Russia, Germany, Lebanon, the UAE and the US have already trained dogs for detection of COVID-19. Dogs have been previously used abroad to detect malaria, diabetes and Parkinson's disease, but this is the first time canines have been used for medical detection in India," he told reporters.

"Army dogs were successfully trained on specific biomarkers emanating from urine and sweat samples of positive patients. These samples do not contain a living virus, but only volatile metabolic biomarkers, which the dogs have been trained to detect. Prior to bringing in front of them, to avoid any surface contact transmission to people handling the dogs, the samples are first exposed to UV rays," Saini said.

"This is the first time in India that the olfactory capability of canines is being used to detect tissues infected with pathogens releasing volatile metabolic biomarkers," he added.

The Indian Army has around 1,200 dogs, out of which nearly 700 are deployed, a senior official said.

"Besides these two dogs, eight other dogs, including four Labradors, are also undergoing training," Saini said.

One-year-old Mani, another chippiparai dog undergoing training, also showed his skills during the demonstration. Mani is the elder brother of Jaya.

"The use of such canines in the detection of Covid-19 can assist in quick and real-time detection of the disease, and help in cutting downscale of RT-PCR and rapid antigen tests, both of which take time. And, in the Army, time is of the essence. Besides, these dogs can be used at live events to screen people," the instructor said.