Prior to the new solution being found, drivers coming from either side of the international border faced the challenge of 14 days quarantine before being allowed to deliver goods. 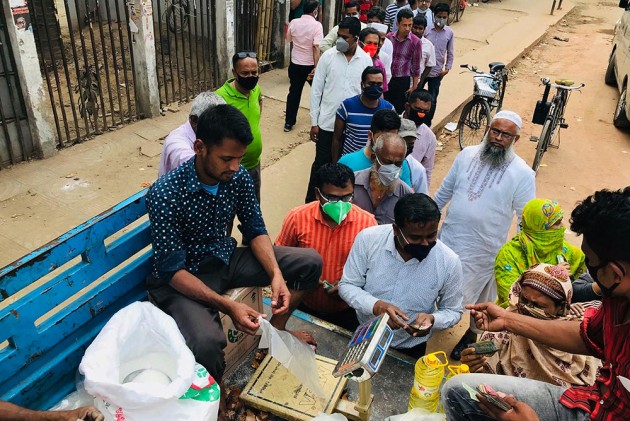 Even as the central government is working out ways to resolve the impasse with West Bengal government on continuing trade commitments with Bangladesh, a solution to ensure no violation of quarantine norms during COVID times has been worked out.

This is part of efforts by India to maintain humanitarian supplies of essential goods to neighbouring countries, including medical supplies to Pakistan, Ajay Sahai, CEO and DG of Federation of Indian Exports Organisations (FIEO) tells Outlook.

“We have no trade with Pakistan except for pharmaceuticals. It's basically a kind of humanitarian supply which has been maintained by India. We have also been able to maintain supplies to Sri Lanka, as the connectivity is through sea which is not a big challenge,” says Sahai.

“The only issue we are facing is at this point is with regards Bangladesh. This has probably happened because the central government and state governments are not at the same page.”

While the central government is very keen that international borders may be opened and India maintain supply of essential products like petroleum, medical supplies and food items to Bangladesh, particularly during the month of Ramadan, the approach of state government is not very constructive, says the official.

Apart from the exchange of strong letters between the state government and the Ministry of Home Affairs, local issues cropping up had resulted in disrupting the trade for one reason or the other. In fact, the commissioner of customs of the border area had in a letter to district authorities voiced concerns about the safety of his officers because of the problems being caused by local politicians. “Not being able to maintain supplies of such products to Bangladesh during these critical times maybe diplomatically embarrassing as India seeks to improve ties with the neighbouring country and also boost exports of petroleum products,” says Sahai.

Prior to the new solution being found, drivers coming from either side of the international border faced the challenge of 14 days quarantine before being allowed to deliver goods. This had led to a pile-up of trucks on both sides with no easy solution in sight.

Under the new solution the entire exchange is now happening at a no man’s land between Petrapole on the Indian side of Petrapole-Benapole border checkpoint and Benapole in Bangladesh. The trucks of both countries are parked there and the exchange of goods is being done with the trucks of respective countries not crossing over the border.

“While the quarantine issue has been addressed, the problem with the transaction on the no man’s land is that infrastructure at the location is not adequately developed and there is also lack of labour to handle the transfer – unloading and loading - of goods,” says Sahai. The whole process is not only cumbersome and time consuming but also adds to the cost.

FIEO official points to the fact that the trade problem is persisting only on the border with Bangladesh as exporters and importers on the Nepal border are not facing any such issues. There is no disruption in the container movement between the two countries.