In UP, Adult Tigress Beaten To Death, Villagers Make Video With Commentary

An FIR has been lodged against 31 identified and 12 unknown people. The autopsy conducted by a panel of three veterinarians said that the tigress died of injuries inflicted upon her by the villagers. 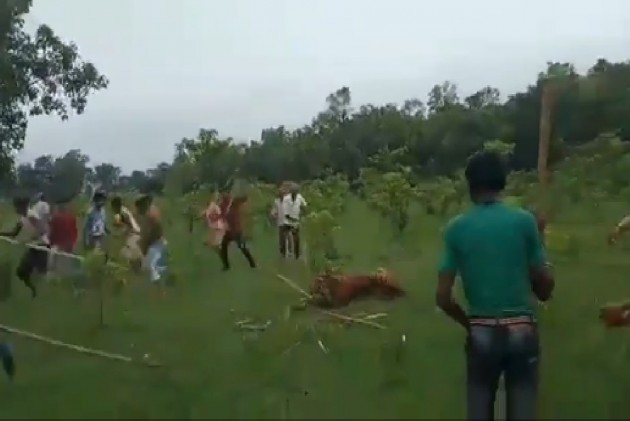 An adult tigress that injured nine persons in Mataina village in Uttar Pradesh's Pilibhit district was trapped and beaten to death by villagers on Thursday.

The incident took place close to where a team of forest officials was stationed. The angry villagers did not allow the injured tigress to be taken to the veterinary hospital and the animal succumbed to her injuries within a few hours.

Warning : this is disturbing content . A 5 year old adult tigress was beaten to death by villagers in UP's #Pilibhit on thursday afternoon . In this mobile video shot by a villager , there 's even background commentary on why they are killing the tigress ! Really sad ! pic.twitter.com/FY7ToT3TGA

An FIR has been lodged against 31 identified and 12 unknown people. The autopsy conducted by a panel of three veterinarians said that the tigress died of injuries inflicted upon her by the villagers.

Pilibhit District Magistrate Vaibhav Srivastava said: "Some of the attackers have been identified, while efforts are on to identify others."

The District Magistrate has also ordered a magisterial inquiry to probe the role of forest officials in protecting the life of tigress.

According to Pilibhit Tiger Reserve (PTR) field director H. Rajamohan: "The tigress' age was assessed between 5 and 6 years. She had sustained fractures and injuries from sharp-edged weapons like spears on almost every part of her body. She also had broken ribs. The tigress was cremated after the autopsy."

According to sources, the tigress had injured nine persons on Wednesday. After it attacked 19-year-old villager Shyam Mohan on Thursday, the big cat was surrounded by villagers armed with lathis and spears and brutally assaulted.

Former field director of Dudhwa Tiger Reserve G.C. Misra said: "The tigress could have been rescued and given timely medical aid as the forest officials had reached the spot. But their inability to rescue the injured big cat in a span of over nine hours undoubtedly reflects their inability in protecting wildlife in adverse situations."

The magisterial inquiry will probe whether sincere efforts were actually made at the spot by forest officials to rescue and save the life of injured tigress.

The Pilibhit district and Pilibhit Tiger Reserve have witnessed deaths of as many as 16 tigers and 3 leopards within the jungle and its surroundings since 2012.

Most of the deaths were caused by poisoning, snaring, affliction with contagious ailments like canine distemper, while only a few were due to infighting.

However, the Wednesday incident was the first in which an adult tigress was beaten to death by villagers in the district.