Modi was scheduled to travel to Bangladesh on a two-day visit from March 17 to participate in the “Jatir Pita”-- Mujibur Rahman’s birth centenary celebration programme -- but his trip was cancelled because of the coronavirus outbreak. 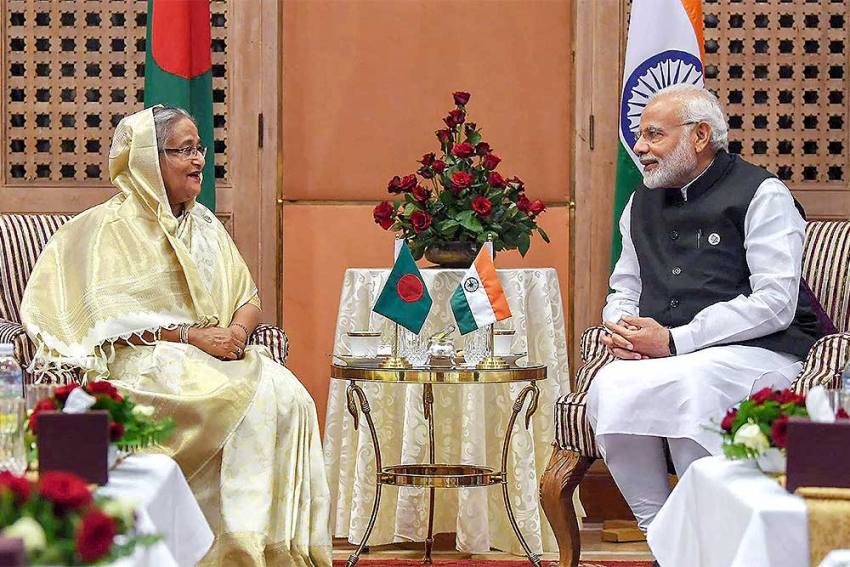 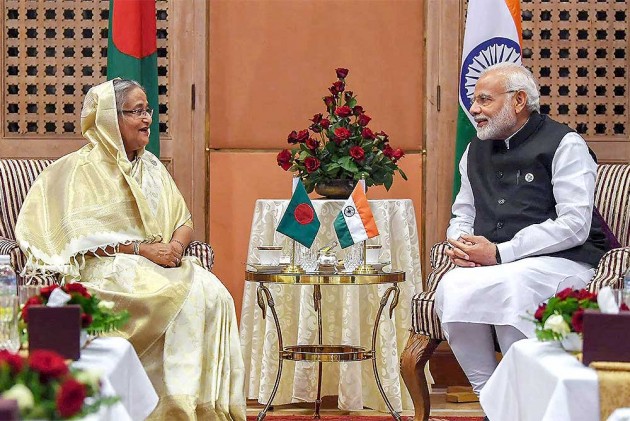 In sharp contrast to the BJP’s attempt of clubbing Bangladesh with a host of neighbouring countries where Hindu religious minorities are persecuted, Narendra Modi on Tuesday praised the Sheikh Hasina regime for pursuing “inclusive and development-oriented” policies in scaling new heights.

Acknowledging that Bangladesh has been setting new benchmarks in a number of areas, be it economy, social indicators or sports, the Indian Prime Minister praised the country for making unprecedented progress in fields like skill, education, health, women empowerment and micro finance.

Modi was scheduled to travel to Bangladesh on a two-day visit from March 17 to participate in the “Jatir Pita”-- Mujibur Rahman’s birth centenary celebration programme -- and a bilateral meeting with Hasina. But his trip was cancelled because of the coronavirus outbreak.

However, anti-India sections have been threatening to hold countrywide protests to greet the Indian Prime Minister when he visits the country in future. Large sections of the Bangladeshi society had also expressed hurt and disappointment at India’s ruling party leaders’ disparaging remarks and tirades against Bangladesh.

Modi did not wait for his future Dhaka visit to assure Bangladeshis of the importance of their country in India’s scheme of things and how the two nations have been scaling new heights and forging a strong bond of friendship.

“In the last few years India and Bangladesh have written a golden chapter in bilateral ties and given a new dimension and direction to our partnership,” Modi said in a video address this evening, while participating in the Mujibur Rahman birth centennial. He pointed out that because of “increasing trust between the two countries we have been able to amicably resolve complex issues like Land Boundary and Maritime Boundary.”

In his speech, Modi paid glowing tribute to Mujibur Rahman and described him as-- “a leader of courage, a man of conviction, a sage of peace, a justice of peace, equality and dignity, a hand of defiance against brutality and a shield against coercion.”

But he did not miss the opportunity of taking a dig at Pakistan.

Without naming India’s hostile neighbour, but in a clear reference to it, the Prime Minister said the life of Bangabandhu gives a great message to the world in the 21st century. “We all are aware how a repressive and cruel regime, disregarding all democratic values, unleashed a reign of injustice on ‘Banga Bhumi’ and devastated its people.”

Modi added, “We are all witnessing how making terror and violence weapons of politics and diplomacy destroys a society and a nation. The world is also watching where the supporters of terror and violence are currently placed and in what state they are while Bangladesh is scaling new heights.”

But the critical references to Pakistan notwithstanding, much of Modi’s speech was aimed at those sections in Bangladesh who were deeply hurt at India’s attempt to club Bangladesh with countries like Pakistan in its intolerance for religious minorities.

Therefore, his address was not to the communists and Islamists -- the Hefazat-e-Islam which was bent on taking to the streets to protest his presence in Bangladesh. His assurance was to those within and outside the ruling Awami League who want strong ties with India but because of the periodic anti-Bangladeshi tirade, are confused of Delhi’s intention.

Indo-Bangladesh relations have developed significantly under the leadership of Modi and Hasina. Bangladesh not only plays a crucial role in providing a secured eastern sector, it plays an exemplary role in India’s “neighbourhood first” policy. For Hasina too, Modi is the best bet as India remains her biggest backer in her fight against Islamic fundamentalists and extremists in her country. Therefore, neither side wants to jeopardise the stable, good relations they enjoy. But disparaging remarks, describing “illegal immigrants” from Bangladesh, have become an issue in Dhaka, which has often put Sheikh Hasina in an awkward position in describing her strong ties with Delhi.

In an attempt to assure his audience, Modi said, “Today, Bangladesh is not only India’s biggest trading partner in South Asia but also a development partner”. He pointed out how electricity generated in India is lighting up lakhs of home in Bangladesh and how a “new dimension” has been added to the relations through the “Friendship Pipeline.” Through road, rail, air, waterway and internet, our cooperation in several sectors is connecting people of the two countries, Modi said.

For now, Modi seems to have assuaged the feeling of hurt among many Bangladeshis. But more BJP leaders will have to show sensitivity towards the neighbour in their future remarks. Otherwise, the fissures in Bangladesh will reopen and force many more people to take to the streets in Dhaka, jeopardising a thriving Indo-Bangladesh relation.