Implement ‘One Nation, One Ration Card’ Scheme To Ensure Migrants Get Ration: SC To States

The SC also sought answers from the Centre on how it plans to distribute ration under the 'Pradhan Mantri Garib Kalyan Yojna’ to those migrant labourers who do not have ration cards. 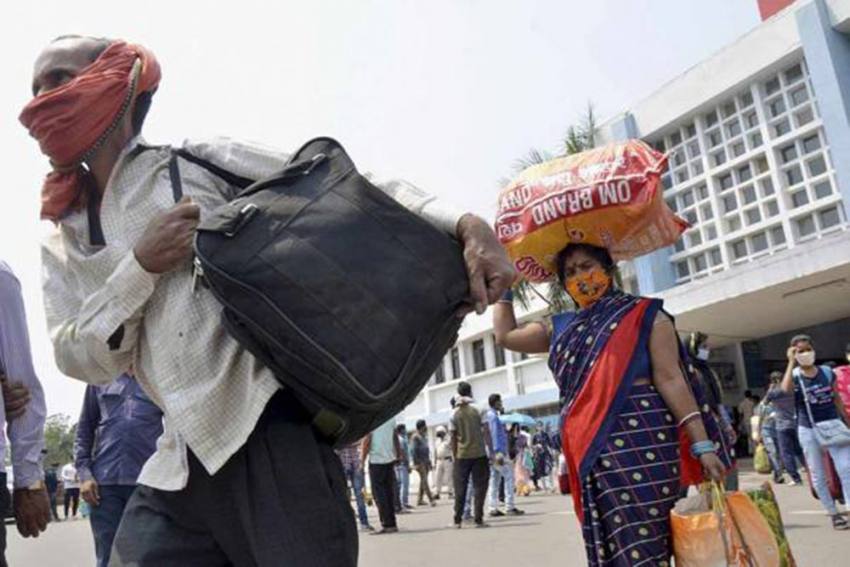 Amid a spike in Covid infections during the second wave, migrant labourers return to Ranchi from Maharashtra
PTI File Photo
Outlook Web Bureau 2021-06-12T07:28:03+05:30 Implement ‘One Nation, One Ration Card’ Scheme To Ensure Migrants Get Ration: SC To States 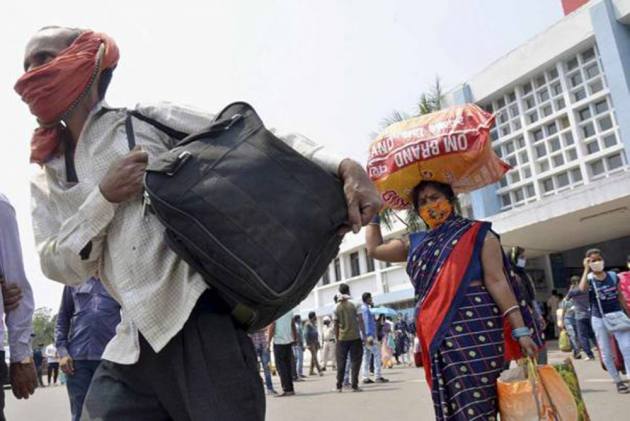 Taking cognizance of the difficulties faced by migrant labourers due to the pandemic, the Supreme Court Friday said that all states and Union Territories should implement "one nation, one ration card" (ONORC) scheme to ensure migrant workers are able to receive ration at the place of their work in other states as well where their ration cards are not registered.

Further, in the backdrop of Prime Minister Narendra Modi’s promise to extend the 'Pradhan Mantri Garib Kalyan Yojna’ till Diwali, the apex court sought details from the Centre on how it planned to ensure ration will reach migrant labourers having no ration cards.
The Supreme Court bench comprising justices Ashok Bhushan and M R Shah also took strong note of the delay in development of a software meant to register workers of unorganized sector to create a national database.

Further, the bench reserved its verdict on a fresh application filed by activists - Anjali Bharadwaj, Harsh Mander and Jagdeep Chhokar – seeking directions to the Centre and states to ensure food security, cash transfers, transport facilities and other welfare measures for the migrant workers on grounds that they are in dire need for help as the crisis is bigger this time.

The bench asked the Centre, the petitioner activists and the states to file written notes in the matter.

The application was filed in the pending suo motu case of 2020 on the issue of problems faced by migrant workers due to curbs clamped in country amid a resurgence of Covid-19 cases.

During the hearing, Solicitor General Tushar Mehta, appearing for the Centre, said that states like Delhi, West Bengal, Chhattisgarh and Assam have not implemented the 'one nation, one ration card" (ONORC) scheme so far.

The counsel for Delhi, however, opposed the submission saying it has been implemented.

On being told by the counsel for West Bengal that there were certain issues with seeding with the Aadhaar numbers, the bench shot back saying, “You must implement it. This is for the welfare for migrant workers who can get ration in every state”.

The bench said that it was concerned with as to how those migrant workers, who do not have ration cards, would be able to avail the benefits of welfare schemes.

“What about the registration of workers of unorganized sectors. Why should development of a software take so long. You initiated it perhaps in August, last year and it is still not over,” the bench asked Additional Solicitor General Aishwarya Bhati who was also appearing for the Centre.

The bench asked as to why the Centre still needed some more months for making the software which can help preparing a national data of workers.

"Why do you still need three-four months. You are not conducting any survey …but you are only creating a module so that data can be fed to your mechanism," it observed.

The mechanism, which is being made, will be “robust” and this would help authorities in “monitoring and supervision” of the schemes.

“Why will it take so many months. You are only preparing a software for creating the national database,” the bench observed.

At the outset, senior advocate Dushyant Dave, appearing for the activists, said the welfare schemes be must be extended to all those who do not have the ration cards as the problems this year is graver.

In response, the Solicitor General submitted that the Pradhan Mantri Garib Kalyan Yojna has been extended to November this year and free five kilo grams of food grains per month would be provided to each member of such families and moreover, the other welfare schemes have to be formulated and implemented by states.

Another senior advocate Colin Gonsalves also referred to several past orders of the top court on registration of migrant workers and said that despite claims made by the government officials, the issue has not been addressed properly.

Earlier on May 24, the top court had termed as "very slow" the process of registration of unorganised workers and had directed the authorities to provide dry ration and make operational community kitchens for migrant workers stranded throughout the country amid Covid-19 pandemic.

Referring to the resurgence of Covid-19 infections and consequent curbs, the activists, in their plea, said, the problems and miseries faced by migrant workers during the lockdown in 2020 have persisted over the past year due to the continued economic distress and now have got aggravated on account of fresh restrictions, curfews and lockdowns being imposed in many states to control the spread of COVID.

In May last year, the top court had taken suo motu cognizance of problems and miseries of migrant labourers and had passed a slew of directions, including asking the states not to charge fare from migrant workers and provide them food for free till they board trains or buses.