The'NotJustACadburyAd' campaign launched this Diwali allows local store owners to create an advertisement for their own shops for free with Shah Rukh Khan. 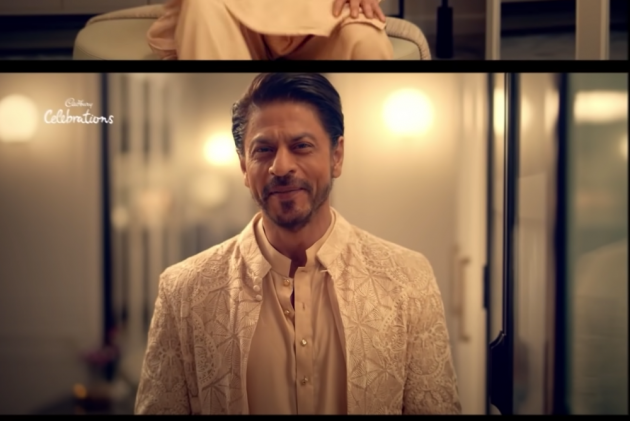 Chocolate maker Cadbury is known for creating stirring and hugely popular ad campaigns in India. Be it the 'Kuch Meetha Ho Jaae' slogan or the 'Pappu Pass Ho Gaya' campaign, Cadbury has managed to reach millions of hearts in India with its thoughtful, well researched and relatable ads that strike a chord with Indian audiences.

This Diwali, the company has taken up yet another issue close to the hearts of the many across the nation - loss of jobs and incomes due to the Covid-19 pandemic. And the company has used none other than Bollywood superstar Shah Rukh Khan for the campaign. Called 'NotJustACadburyAd', the campaign allows local store owners to create an advertisement for their own shops for free with Shah Rukh Khan.

Aimed at helping local store owners across India who took a big hit due to the pandemic, the ad allows anyone to create an ad for their local store and use the face and voice of Shah Rukh Khan to promote their brand without spending a penny on endorsements.

The ad uses Artificial Intelligence (AI) to allow viewers to create their own custom ads through a dedicated website, given they agree to share basic information about their business. According to Cadbury, AI and machine learning are then used to recreate Khan's face and voice in a way that it sounds like the actor is saying the local store or brand's name.

Those interested to create a personalised ad featuring Shah Rukh Khan can log in to the notjustacadburyad.com website which has been created solely for taking requests for generating custom versions of the ad.

According to the Cadbury website, the company collaborated with Rephrase.ai. The latter specialised in creating life-like, "studio quality" advertisements using AI tools and artificially generated narrators.

While the advertisement has won many hearts on social media, many have raised questions about the possibility of the ad promoting deep fakes. Since the AI often relies on deep neural networks to recreate synthetic videos, the ad itself can be considered similar to a deep fake.

A social media user on the microblogging site Twitter considered the ad "hugely problematic"
since it was "blurring the lines between content-driven facial ML and deep fakes, it also opens up avenues for the larger small business community and citizens that such generation of "deep fake" is as easy as sending a WhatsApp message".

this cadbury Ad is hugely problematic, it's blurring the lines between content-driven facial ML and deep fakes, it also opens up avenues for the larger small business community and citizens that such "deep fake" generation is as easy as sending a whatsapp fwd

Rephrase, however, does not claim to be in the business of "deep fakes", instead referring to their product as "facial reenactment", as quoted by an article in 'Rest Of the World.org'. It has among its clientele several big names across industries and has been gaining ground as a cheap alternative to real ads.

This, for instance, is not actually the first time that Cadbury has used AI to create synthetic video advertisements. They did it first in August when they partnered with Rephrase to create a Raksha Bandhan ad in which actor Hrithik Roshan can be seen giving out personalised greetings and messages to specific people.

Hrithik Roshan, on behalf of Cadbury, is wishing Raksha Bandhan to every brother and sister personally! We at @Rephrase_AI worked closely with Cadbury, possible! India’s first synthetic media campaign is live. More details on how to create it for your sibling ðÂÂÂÂÂÂÂÂÂÂÂÂ pic.twitter.com/Rn1mGBpnUy

The ad can be created by visiting the campaign's website and filling in the details required to create a walking-talking Shah Rukh Khan and for free.