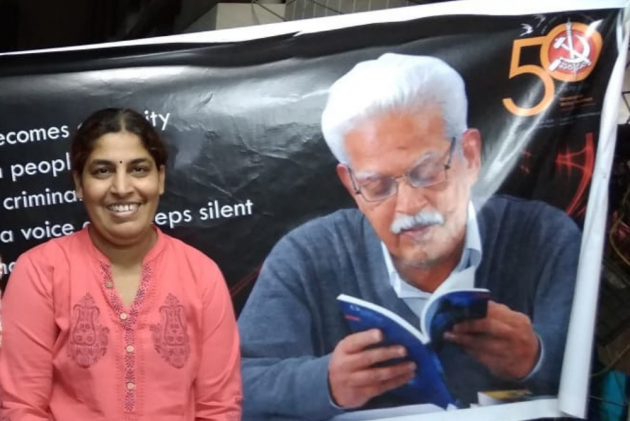 As the Pegasus spyware project continues to unfold, many women who figured in the list of potential targets of surveillance say that the consequences of the violation of privacy rights should be seen through a gender lens.

The disclosure by a global media consortium of potential targets of surveillance of politicians, journalists, human rights activists in India and many other countries have ignited a political firestorm. The list, from a leaked database, contained phone numbers of more than 60 women, according to a report by The Wire, a media partner of the global consortium.

Pavana, daughter of revolutionary poet-activist Varavara Rao, is one among the hundreds of names that have appeared in the alleged surveillance list by the Israeli spyware Pegasus. Pavana dreads to think about the spying eyes, which have been following her everywhere.  She says it was incomprehensible that someone was privy to her private conversations and invaded her space for long. She calls it a body violation. “It is an unjustified violation of one’s privacy. Phones are like part of our lives now. It lies around in your bedroom, bathroom, and everywhere. It lies around while we even change clothes,” she tells Outlook.

Pavana’s father Varavara Rao was arrested in connection with the Elgar Parishad -Bhima Koregaon violence in August 2018. The octogenarian has been granted six months bail in February by the Bombay High court in view of his poor health.

Pavana was aware that she was on the Pegasus list in 2019 after she got an alert from WhatsApp that she was a target of surveillance of the Israeli spyware Pegasus. In 2019, Facebook-owned platform WhatsApp confirmed that at least two dozen journalists and human rights activists were identified as targets of surveillance of Pegasus. “I was alerted by WhatsApp that I was being snooped from September 2018 to October 2019,” she said.

However, Pavana says she was alarmed to learn the latest revelation by global news agencies on the alleged spyware scandal and the extent of the intrusion by it.

Experts say that the private spyware owned by the NSO group can convert a phone into a surveillance device and can steal data, messages, passwords, contacts, and photos from the device. It can also access the phone's camera and microphones without leaving any proof of the attack.

"I always knew that we are under some kind of surveillance. But it was shocking that I was being spied upon by malicious spyware like Pegasus," she says.  Because of the high-tech nature of the surveillance, family members are also at risk, says Pavana. “One’s family, children, friends, everyone loses their privacy,” says the Hyderabad-based college lecturer.

Minal Gadling, who was also featured in the Pegasus list echoes similar sentiments. Minal, wife of lawyer Surendra Gadling arrested in the connection with the Bhima Koregaon violence, was terrified about the possibility of someone snooping on her phone and intruding her private space.  She is also worried about the privacy of her children, who are in their teens.

“It is an absolute violation of our privacy. I always carry my phone. It lies around even when I change my clothes. I never imagined in my wildest dream that someone is watching me,” she says.

Minal says that she also received an alert from WhatsApp in 2019 that her phone was compromised. “I didn’t think of taking any precautions because I don’t have anything to hide,” she says. Moreover, she didn’t have the means to buy a new phone.

However, the latest Pegasus project came as a shocker to her.  “I read that the malware can access messages, pictures, locations, video, and whatever information they need. If my phone is hacked, everything will be in the public domain. It troubles me so much,” says the homemaker.

Activists also point out that the most worrying aspect of the surveillance list was the presence of the phone number of a woman, who accused former Chief Justice of India Ranjan Gogoi of sexual harassment charges.  At least 11 family members of the woman also feature in the list. Lawyer and executive director of Internet Freedom Foundation Apar Gupta says that Pegasus project reveals a breach of privacy at several levels.

“The fundamental right to privacy is a larger public law and that also holds in surveillance cases. In the case of the woman, who raised sexual harassment charges against the former CJI, it is also a violation of exactly the protections which are provided to survivors under Indian law because many of her relatives have been put under surveillance,” he says.

Jenny Rowena, an associate professor at Delhi University’s Miranda college says that the alleged invasion into one’s personal space by the state is humiliating. Rowena’s husband Hany Babu’s phone also has been under Pegasus surveillance, according to reports. Babu, associate professor from Delhi University was arrested in July 2020 in connection with the Bhima Koregaon violence.

Rowena, the mother of a teenager, says that she felt dismayed when she came to know that her husband was being snooped.

’The idea of privacy doesn't have an existential thing to it. But when it really happens to you then you'll feel it. I felt vulnerable that someone can be privy to one’s most intimate conversations. It was humiliating to learn that somebody was watching you over in your private space,” she says.