'He Is Not Even Speck Of Dust On Nitish Kumar's Feet': JD(U) Jabs Giriraj Singh

Gloves were off between Bihar allies JD(U) and BJP on Saturday in the wake of Union minister Giriraj Singh's latest attack on the Nitish Kumar over Patna floods. 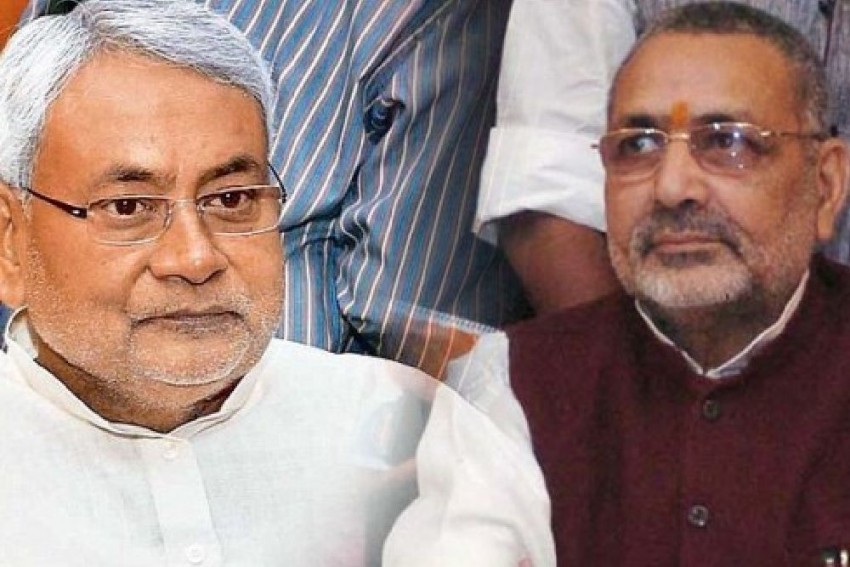 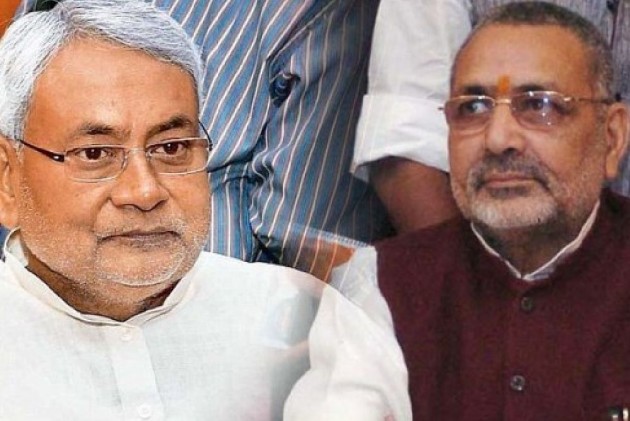 Gloves were off between Bihar allies JD(U) and BJP on Saturday in the wake of Union minister Giriraj Singh's latest attack on the Nitish Kumar government for its "inept" handling of the water-logging crisis that has plagued the state capital for a week.

Singh, who was formerly a member of the state cabinet, said, "Jab taali sardaar ko, to gaali bhi sardaar ko" (the leader gets the praise as well as the blame), when asked about the chief minister and his deputy Sushil Kumar Modi coming under attack over the inundation of several parts of the city following torrential rainfall last week.

The firebrand BJP leader, a known detractor of Kumar and Modi, had made the comments on Friday in Darbhanga, barely a couple of days after he had said in his Lok Sabha seat of Begusarai that the NDA "owed an apology to the people of Patna".

Stung by Singh's latest salvo, leaders of the JD(U) headed by Kumar came out with a barrage of attacks against Singh and his party.

"He (Giriraj Singh) is not even comparable to a speck of dust on Nitish Kumar's feet. One does not become a leader just by chanting the name of Mahadev (Lord Shiva) every now
and then," JD(U) spokesman Sanjay Singh fumed.

Giriraj Singh has a habit of chanting Lord Shiva's name during his speeches.

Another party spokesman Rajiv Ranjan Prasad rattled off facts to underscore that the BJP shared a far greater share of the blame for the crisis of Patna.

"Ever since the JD(U)-BJP combine has been ruling the state, the urban development portfolio has been with our alliance partner. The Mayor of Patna belongs to the BJP and so
do the MPs representing the two Lok Sabha constituencies that cover the district. All the assembly segments in the city have been BJP strongholds since the 19990s," Prasad said.

JD(U) national general secretary and chief spokesman K C Tyagi expressed his vexation in Delhi: "Giriraj Singh has become a habitual offender. He is causing more damage to our
alliance than Tejashwi Yadav (leader of the opposition in state assembly, belonging to RJD) could be capable of."

There have been instances in the past when Giriraj Singh has been reprimanded by Prime Minister Narendra Modi and BJP chief Amit Shah for his over the top remarks, Tyagi said
adding that he wondered why the saffron party leadership has not yet been able to rein in the loose cannon.

The RJD which has been down since its debacle in Lok Sabha polls, sought to fish in troubled waters.

Party national spokesman and Rajya Sabha MP Manoj Jha said, "It is one of the rare occasions when we have found ourselves on the same page as a polarising BJP leader like
Giriraj Singh. He is perfectly right in blaming the NDA government in Bihar for the Patna disaster".

Meanwhile, BJP MP Ram Kripal Yadav also lashed out at the Bihar government saying a system has been put in place in which the bureaucracy is out of control.

"Areas of my Pataliputra Lok Sabha constituency are water-logged but when I try to contact officials they do not show the courtesy of even picking up the phone," he said.

"When the matter belongs to our home, why should anyone go before the media. Agreed that some leaders are under pressure to address public grievances during floods. But the
CM and the deputy CM are working tirelessly," he said.

Top leaders of the NDA constituents share an excellent rapport and it is a united force which will wipe out the Grand Alliance in the 2020 assembly polls, said Anand.