Tejashwi Yadav took part in the demonstration in front of the Buddha Smriti Park, a stone's throw from the Patna Junction, where he was joined by alliance partners. 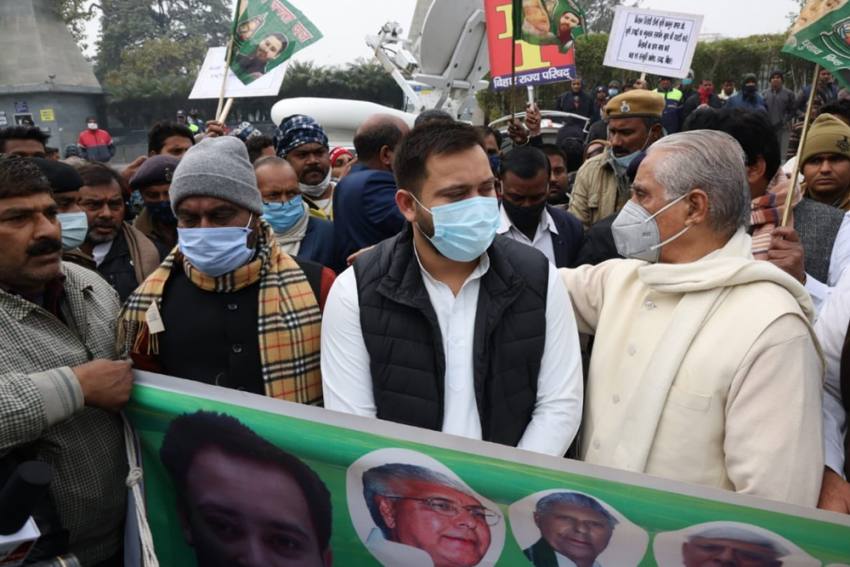 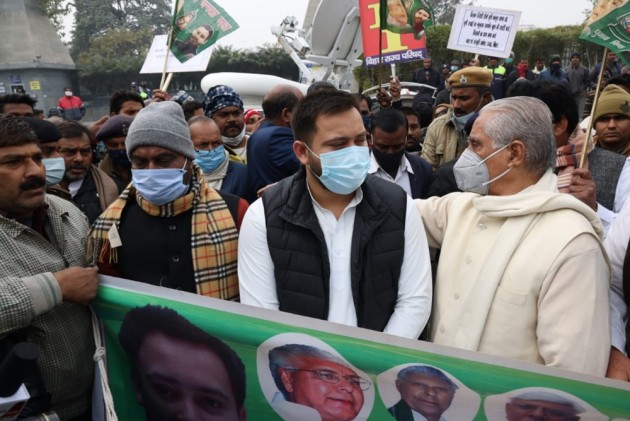 To express solidarity with the protesting farmers in Delhi, supporters of the opposition Grand Alliance in Bihar on Saturday formed human chains across the state.

The opposition leaders stood at their designated spots for close to 30 minutes, beginning half past noon. Many of them held hands but many others chose to simply stand with a safe distance from each other in view of the physical distancing norms in force because of Covid-19.

Leader of the opposition Tejashwi Yadav took part in the demonstration in front of the Buddha Smriti Park here, a stone's throw from the Patna Junction, where he was joined by alliance partners, most notably party emblem waving workers from the Left who have been enthused since the CPI(ML), the CPI and the CPI(M) showed signs of recovery in the recently held assembly polls.

The RJD leader bristled when asked about Chief Minister Nitish Kumar's remark suggesting that the opposition seemed to have taken a leaf out of his book.

When approached by journalists with questions about the "manav shrinkhla", Kumar had replied with a broad grin "we had organised human chains in 2017 in support of prohibition and against dowry and child marriage the following year. Last year, a human chain held to spread awareness about climate change in addition to the issues we had previously raised broke all records".

"It is nice that others are also drawing inspiration. Everybody has the right to hold such programmes," he had said with a smirk.

Yadav responded with distaste "it is a petty remark. Is he the first person to have ever held a human chain? He should instead make his stand clear on the new farm laws".

RJD national spokesperson Manoj Jha, who stood nearby, said, "The human chains sponsored by the chief minister depended upon the bureaucracy for its success. Officials concerned were given targets of turnouts to achieve. What is happening here today is spontaneous."

Notably, the RJD had taken part in the 2017 human chain while it shared power with Kumar. Its jailed supremo Lalu Prasad Yadav, who was then out on bail, had famously stood at Gandhi Maidan to demonstrate his support for liquor ban.

Jha, who is a member of the Rajya Sabha, also described the Centre's talks with agitating farmers as "a monologue, instead of a dialogue, a reason why Delhi's borders at Singhu and Ghazipur have been on fire".

Prominent among those who took part in the human chain at the state capital were CPI(ML) secretary general Dipankar Bhattacharya and Congress legislature party leader Ajeet Sharma.

The human chain was also formed in districts. In Nawada, local Congress MLA Neetu Singh was among those who participated in the demonstration. In Begusarai, Congress, RJD and Left workers stood in front of the district headquarters and other places.

No untoward incident was reported from anywhere so far though the officials said the human chain was held without permission.

Leaders of the ruling NDA in the state came out with statements claiming that the human chain was a "flop".