Give Up BJP's Hospitality If You Want Dialogue: Congress Tells Rebel Rajasthan MLAs

Randeep Surjewala said that the rebel Congress legislators should first hold a dialogue with the party on the condition that they give up the security of Haryana police in Manesar, and the hospitality and friendship of the BJP. 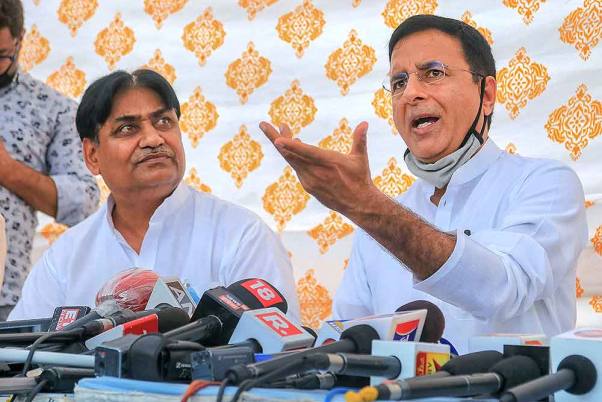 Congress spokesperson Randeep Surjewala on Tuesday said that dissident MLAs should give up the hospitality of the BJP and the security of Haryana police if they want to hold a dialogue with the party.

Asked whether the doors for dissidents are open, Surjewala said that the legislators should first hold a dialogue with the party on the condition that they give up the security of Haryana police in Manesar, and the hospitality and friendship of the BJP.

"Gangrapes are happening, people are being beaten up in Gurgaon. There is no police available for them, but 1,000 policemen are deployed for the security of 19 MLAs. The legislators should first give up the Haryana police's security, and friendship and hospitality of the BJP, return home and only then will the dialogue take place," he said.

Surjewala also read out a statement released by party leader Priyanka Gandhi Vadra on the foundation laying of the Ram temple in Ayodhya on Wednesday.

In reply to a question, Surjewala said that politics should have 'dharma' instead of having a politics of 'dharma'.

He also said that Bihar police's interference in connection with a probe into actor Sushant Singh Rajput's death was unfair because it was the jurisdiction of Maharashtra Police.

"Bihar police cannot interfere in the jurisdiction of Maharashtra police. Such a situation may lead to anarchy, because enforcing law in a state is the responsibility of the state government," he told reporters outside Hotel Suryagarh where the party MLAs are staying.