Govind Sagar Lake, a man-made reservoir also considered as one of the world’s highest gravity dams on Sutlej river sourcing water to Bhakra dam, has become a test model for successful rearing of trout fish.

From clear icy-cold oxygenated water in the high mountain valley streams and rivulets to warm water bodies of Govind Sagar lake, the highly valued ‘trout fish ‘seems to have found another congenial habitat to swim, rear and flow with the time.

Govind Sagar Lake, a man-made reservoir also considered as one of the world’s highest gravity dams on Sutlej river sourcing water to Bhakra dam, has become a  test model for successful rearing of trout fish.

Taking a cue from this, the fisheries department has now found  Kol dam reservoir at Kasol in Bilaspur district in the lower Himachal belt.

Himachal’s minister for agriculture and fisheries Virender Kanwar said “Himachal Pradesh can emerge as a major trout fish producing state in the country as efforts of the scientists have proved successful in both the man-made water bodies on Sutlej river in the districts of Bilaspur and Una”. 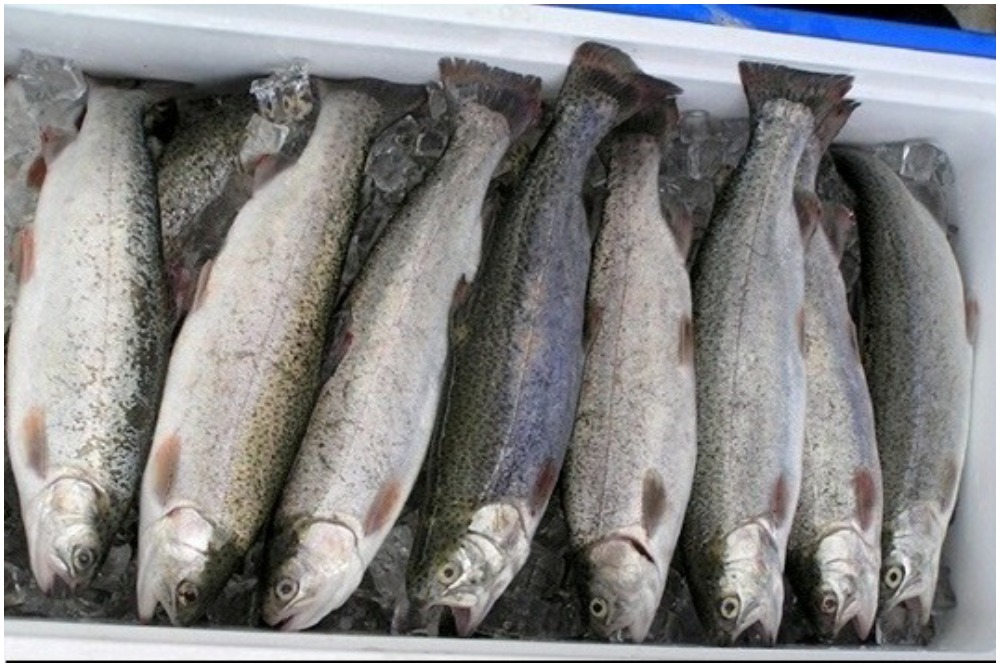 The state has set out a target of producing 850 MT tonnes of trout fish, both in the private sector and government, of which 100 MT tonnes will only be from newly created raceways.

“We have found that the growth of trout is much faster in the warm waters of Kol dam than in the cold waters. It can become an important source of livelihood for the people engaged in fish farming, ” Kanwar says.

Earlier the trout fishery in Himachal Pradesh was happening only in 600 km riverine length at higher altitudes of cold water streams Beas, Ravi and other small rivulets.

To begin, the fisheries department had introduced 500 fingerlings of Rainbow trout taken from trout farm Dhamwari (Shimla). It was stocked in the cages made of HDPE floats and nets for culturing the fishes at  Gobind Sagar reservoir.

This experiment was done in 2019  for the diversification of trout culture in warm waters for the first time. This innovation paved a way for culturing the Trout fish in warm districts also during a span of 5-9 months when the water temperature is congenial for its culture.

“In 2020, the experts from fisheries department Himachal Pradesh installed 24 fish cages in Kol dam reservoir at Kasol, Bilaspur for the culture of Rainbow Trout on pilot basis under the centrally sponsored -blue revolution project,” the minister said.

Around 30,000 fingerlings of 10-12 grams of Rainbow Trout were stocked in the cages in September- October  2020 from Trout Farm Hamni ( Kullu ). The fish gained a bodyweight of almost 1 kg in just eight months which usually takes two to two-and-half years in the coldwater regions, showing an accelerated growth

By now, around eight metric tonnes of trout fish have already been produced from the Kol dam reservoir with an average weight of 300 grams while the maximum weight of one Kilogram was recorded at the reservoir.

In the past few years, commercial fishing has suffered a huge setback. There has also been a sharp decline in the catches due to construction activities in the valleys, destruction of breeding and feeding grounds of the fish, frequent flash floods, run of the river hydel projects and rapid urbanization. But, warm water trout fishing can certainly offer new hope.

My Localmarket: Every Non-Vegetarians’ Go-to Shop For Locally-Sourced Meat And Fish

A Decade Down, Forever to Go, Says Canon India And Godox Mentors Nitin and Shanaya Arora

Wise Is Building Transparency And Ease Of Use In Money Remittances