'Rahul Gandhi is a bachelor and troublemaker...so, girls should be wary of him...do not bend down in front of him', Joyce George had said, earlier 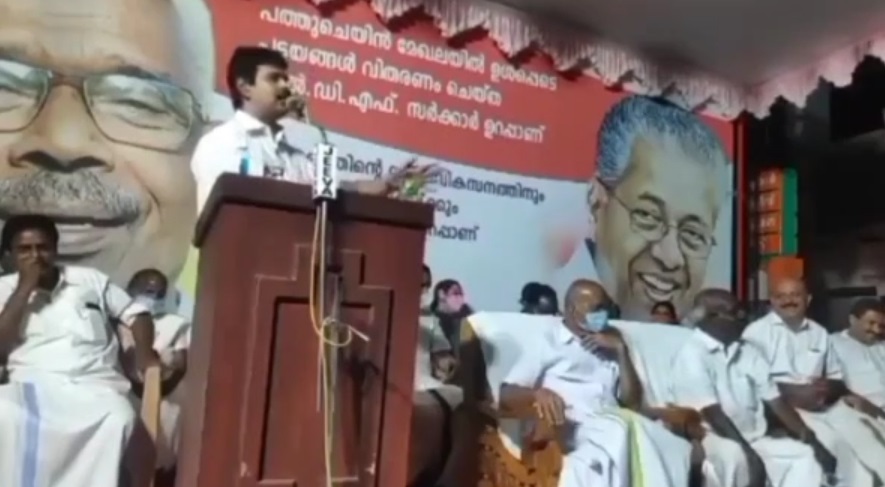 Amid backlash for his sexually-coloured remarks against Wayanad MP Rahul Gandhi, former MP Joyce George on Tuesday said he regretted his comments.

His response comes amid the Congress demanding his arrest and after the CPI(M) condemned his remarks.

During a speech in Kerala’s Irattayar, George had said Gandhi only visits girls’ colleges and that girls should be ‘careful’ while dealing with the former Congress President.

"Rahul Gandhi is a bachelor and troublemaker…so, girls should be wary of him…do not bend down in front of him," he had said while campaigning for state power minister M M Mani.

As TV channels started airing the visuals of his speech this morning, sharp reactions poured in from various quarters especially from the Congress-UDF fold, which strongly condemned the remarks and described it as "misogynistic".

Soon after, George said he was withdrawing his remarks.

"I hereby unconditionally withdraw the inappropriate remarks made by me while addressing an election rally in Irattayar here on Monday. I also express regret over that," he said while speaking at a meeting in Kumaly.

George had won as the CPI(M) supported independent during 2014 Parliamentary poll from Idukki, but lost to Congress's Dean Kuriakose in 2019 Lok Sabha polls.

Sensing that the objectionable remarks would give the Opposition ammunition to target them during campaigns in the poll-bound state, the CPI(M) was quick to reject George's comments.

Distancing himself from the derogatory comments, Chief Minister Pinarayi Vijayan made it clear that attacking Gandhi personally was not the LDF's stand. "We will oppose him politically not personally', Vijayan told reporters in Kasaragod.

Soon after that, the CPI(M) state secretariat here issued a press statement stating that the Left party does not agree with the remarks made by their ex-MP.

"The CPI(M) is opposing the political stand taken by the Congress party and Rahul Gandhi. Such remarks will only help to deviate attention from the political criticism. Nobody should make such comments," it said.

The former Left independent MP's remarks came days after Gandhi had given Aikido lessons at the famed St Teresa's college in Kochi based on the request of a student.

The Congress leader had visited the women's college for an interaction with students after he arrived at the state for election campaigning.

Meanwhile, the Congress leaders were up in arms against the George's statements against Gandhi. Leader of Opposition Ramesh Chennithala termed the sexually coloured remarks against Gandhi as 'unfortunate and unacceptable.' A case should be registered against the former MP and he should be arrested, he said.

KPCC chief Mullappally Ramachandran and former chief minister Oommen Chandy lashed out at the former MP and said the remarks were "high deplorable" and "unacceptable".

"Joyce George has actually insulted the womanhood through the comments. He should appologise publicly," Ramachandran said and urged the Left women leaders to criticise their former independent MLA and initiate legal action against them.

Member of Parliament and Youth Congress leader Dean Kuriakose said George might have spoken about his own character.

"The vulgarity within him has come out now. What is his merit to criticise Rahul Gandhi? He is trying to follow the footsteps of power minister M M Mani, known for making such derogatory comments," he said.

Kuriakose said through the comments, the former MP had not only insulted Gandhi but also the girl students.

He also said he would soon lodge a complaint with the Election Commission against George in this connection.

Activists of Mahila Congress and Youth Congress leaders took out a protest march in the state capital against the objectionable remarks made by George.

Criticising George, Kerala Congress leader P J Joseph said the comments were 'immature' and wanted to know whether it was the opinion of the entire LDF.

However, minister M M Mani justified George and said he had not made any anti-women remarks and only criticised Rahul Gandhi.