Farmers Bring Their Own Food, Tea At Govt Meeting Again 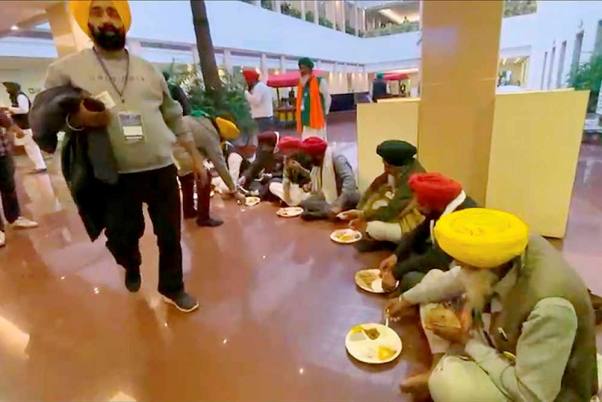 Representatives of various farmer unions have food carried by them, during a meeting with the government over the Centre's new farm reform laws, at Vigyan Bhavan in New Delhi.
PTI photo
PTI 2020-12-05T18:56:56+05:30 Farmers Bring Their Own Food, Tea At Govt Meeting Again

Meeting the government for the fifth time on Saturday with their demands for scrapping the three new farm laws, union leaders decided to have their own tea and food, ferried from their langar (community kitchen) at Singhu border, where thousands of farmers are protesting for over a week.

The fifth round of talks began at 2.30pm  and was attended by 40 representatives of various farmer organisations.

Union leaders said they had their own food and tea during a break, rather than having what was arranged by the government at Vigyan Bhawan, the meeting venue.

During their last meeting on Thursday also, the farmer leaders had their own lunch, tea and even water.

Farmers' leaders had earlier on Thursday told the government to focus on resolving the issues instead of trying to be a good host by offering lunch.

Thousands of farmers have been camping at various borders of the national capital as part of their protest against the laws.

Union Agriculture Minister Narendra Singh Tomar, Railways, Commerce and Food Minister Piyush Goyal and Minister of State for Commerce Som Parkash, who is an MP from Punjab, are holding talks with the representatives of the farmer groups at the Vigyan Bhawan.

On Wednesday, agitating farmers demanded that the Centre convene a special session of Parliament and repeal the Farmers' Produce Trade and Commerce (Promotion and Facilitation) Act, 2020; the Farmers (Empowerment and Protection) Agreement on Price Assurance and Farm Services Act, 2020; and the Essential Commodities (Amendment) Act, 2020.