The Mahagathbandhan is headed for doom in Bihar if the exit polls of the 2019 Lok Sabha elections are anything to go by. 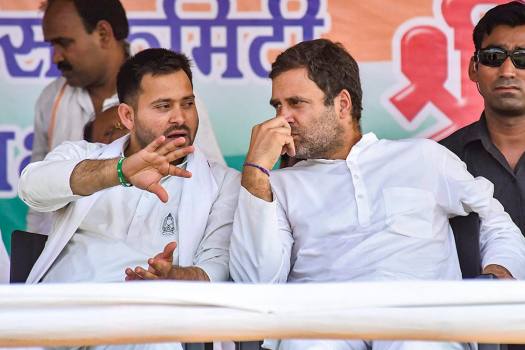 According to the most of the exit polls announced on Sunday, the Narendra Modi-led NDA will sweep Bihar by winning up to 38 of the total 40 seats in the state, leaving the grand alliance, its main challenger, bite the dust.

According to India Today-Axis My India exit poll, the NDA, a pre-poll alliance of the BJP, Nitish Kumar’s JD (U) and Ram Vilas Paswan’s LJP, are headed to get a landslide majority proving all pre-election analyses wrong by a huge margin. Other exit polls have also predicted 29 to 33 seats for the alliance.

Prior to the elections, a close fight was expected between the NDA and the Mahagathbandhan, an RJD-led alliance consisting of the Congress, Jitan Ram Manjhi’s Hindustani Awam Morcha-Secular, Upendra Kushwaha’s Rashtriya Lok Samata Dal and Mukesh Sahani’s Vikassheel Insaan Party. It was considered strong primarily because of the coming together of the different caste leaders. While former chief minister Manjhi is widely acknowledged to be the strongest mahadalit leader from Bihar, Sahani had emerged as a young extremely backward caste leader of the Mallahs, the fishermen’s community which has a sizeable presence in the state. Also in the Mahagathbandhan was Upendra Kushwaha, a popular OBC leader of the Koeri community, who had won three Lok Sabha seats as part of the NDA.

With RJD expected to retain its Muslim-Yadav (MY) vote bank and the Congress a chunk of the upper caste votes, their alliance was considered formidable. The NDA, however, had its own strengths in this election. Nitish and the BJP had never lost any parliamentary polls since 2004. In 2014, the BJP, the JD-U and the LJP had polled about 52 per cent of the total votes. Nitish was not part of the NDA at the time and had contested the polls in alliance with the CPI. But in 2017, his return consolidated the NDA.