BJP's Vijay Goel had broken the odd-even rule and paid a fine of Rs 2000 back in April 2016 as well, when it was implemented by the Arvind Kejriwal government.

BJP leader Vijay Goel on Monday violated the odd-even scheme in Delhi, by moving out in an odd-numbered car, calling the scheme a "mere gimmick" and an "election stunt" of the Aam Aadmi Party.

"This scheme is just a gimmick, they (Delhi Govt) themselves say pollution is due to stubble burning, then how does this scheme help? I am ready to pay the fine for the violation," he said.

Deputy Chief Minister Manish Sisodia lashed out at the BJP leader, saying the pollution issue is not on the Narendra Modi-lead party's priority list but making jokes is.

"Vijay Goel should do whatever he wants, he shouldn't not only break the odd-even rule but he should also break the ban on generators and construction in the city. He always opposes the things done by the state government for the welfare of the people of Delhi. Pollution issue is not on the priority list of BJP but making a joke is, so they are making fun of it," Sisodia told ANI.

The AAP and the BJP have been engaged in a blame game over the pollution crisis in Delhi even as Delhi Chief Minister Arvind Kejriwal has made an appeal to the central government and that of the neighbouring states to "not politicize the issue of pollution."

On Sunday, Goel had said that he would violate the rule that was to begin on Monday and alleged that it was an "election stunt" of the Kejriwal government.

"My violation of odd-even scheme of the Kejriwal government will be symbolic because it's an election stunt and drama in view of the assembly election," Goel had told PTI.

Goel had broken the odd-even rule and paid a fine of Rs 2000 when the scheme was implemented by the Kejriwal government in April 2016.

"With exemptions to 70 lakh two-wheelers, cab aggregators Ola and Uber, three-wheelers and women drivers, the odd-even scheme has been rendered a mere gimmick and an election stunt," he said. Goel claimed many environmental experts were against the odd-even scheme and added that it was a "waste" of public expenditure.

"If only stubble burning is responsible for causing pollution, why is Kejriwal government implementing odd-even scheme?" Goel asked.

AAP leaders, including Kejriwal, have been blaming crop residue burning as the main reason behind severe levels of air pollution in the city.

"Kejriwal has never made any report public about pollution caused by vehicles and other sources," he said.

Kejriwal had recently said that BJP leaders like Goel were not realising the "seriousness" of air pollution problem in the city.

Vehicle used by Goel has violated parking rules before:

This wasn't the first time when the car Goel was using to protest the scheme violated traffic rules. A quick check on the Delhi Traffic Police website reveals that the vehicle has a notice against it for a parking violation on 16th April 2019. 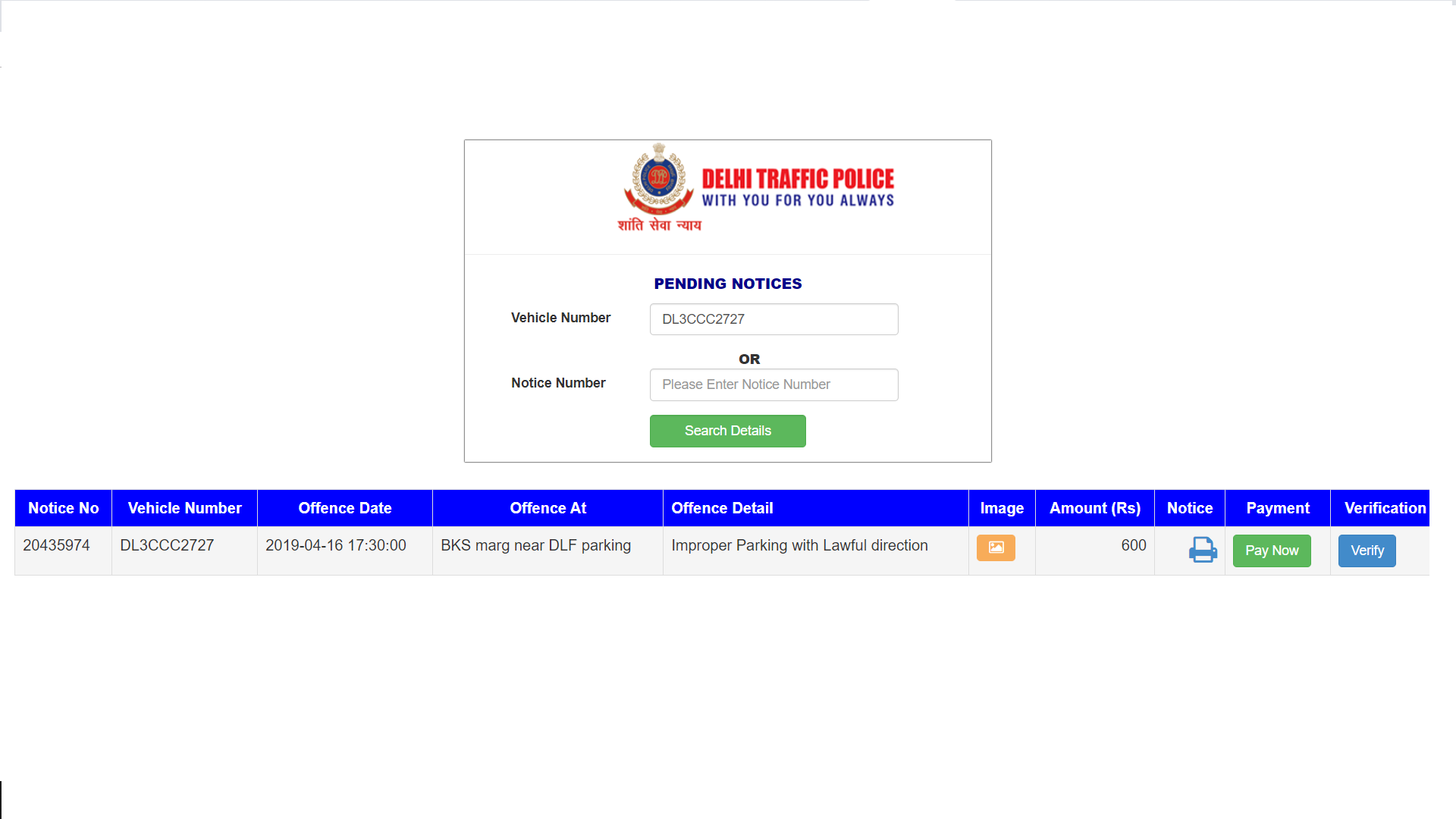 There is also the above image on the Delhi Traffic police website which also shows that the car has gone under significant refurbishment since April, probably in preparation for its run from Mr. Goel’s home to ITO this afternoon.