Two major Durga Puja committees in West Bengal have selected contentious and controversial issues as their themes this year.

For the uninitiated, Durga Puja in Kolkata has long moved past being purely a religious occasion and morphed into a gigantic display of art and creativity. The trend for some time now has been for Puja Committees to come up with a theme, and design a pandal and idol that fits that theme.

Traditionally Durga Puja themes have centred around current, top-of-the-mind ideas. Global warming, war, popular movies and even the Covid 19 pandemic have all found their way into Puja themes. But this year, things seem to have taken an overtly political turn, with two major Durga Pujas selecting contentious and controversial issues as their themes.

In the South Kolkata neighbourhood of Behala, the Barisha Club Durga Puja has chosen to take a stand against NRC. The Puja looks at how the original Dhakeshwari Durga idol of Dhaka was brought over to Kolkata during the partition, effectively turning the goddess into a refugee. The Puja showcases an idol of a mother with four young children, two girls and two boys, inside a metal cage, surrounded by barbed wire and watchtowers and signage identifying one side of the pandal as India and another as Bangladesh. The metaphor is obvious – this is Durga and her children, Lakshmi, Saraswati, Ganesh and Kartik, in a detention camp.

A significant percentage of Kolkata’s Bengali Hindu population is made up of immigrants from erstwhile East Bengal and their descendants and the partition of Bengal has always pulled at the heartstrings of this community. Indeed, so important is this divide between the ‘ghoti’ community of West Bengal and the ‘bangal’ community who originate from the East, that even support for the city’s two biggest football clubs, East Bengal and Mohun Bagan, are drawn on these lines. There are at least two other pujas, one of them in the other South Kolkata neighbourhood of Naktala that have chosen partition as their theme, perhaps playing on the anxieties of the ‘bangal’ community about NRC and detention camps. But only Barisha Club has chosen to address the contentious issue head on.

But why take an overt political stand? Deboprasad Bose from Barisha Club clarifies, “We did not start out looking for a political issue. Since 2018, we have focused on social issues and problems faced by the common man as the theme for our puja. We have faced opposition for doing so as well. When we focused on the dangers of 5G technology to the environment, one of our sponsors, a telecom company, pulled out, but we stuck to our stance. Even last year when we focused on the plight of migrant labourers, we were accused of targeting the central government. This year, we chose to focus on the problem of people who have been forcibly turned out of their homes. That is the real issue – making people stateless. NRC is just a small part of that larger problem”.

Far more controversy has been caused by Dumdum Park Bharat Chakra’s puja, which has chosen the recent farmer protests as its theme. While the pandal itself is decorated with paddy, it is the display outside the pandal, in the passage leading to it, that has raised eyebrows. To represent farmers, Bharat Chakra has chosen slippers and sandals, which are plastered all over the walls of the passage leading to the pandal. This is a common scene at agitation spots in the aftermath of police lathi charges, when protesters often flee leaving their footwear behind. Alongside the slippers are posters containing slogans from farmer protests over the years as well as murals depicting specific events, such as the violence in Lakhimpur Kheri. 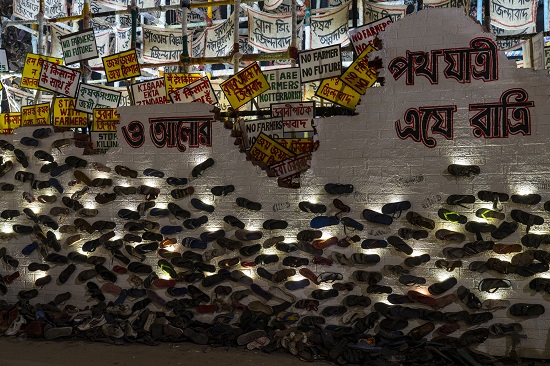 But it is the footwear on the walls which has brought criticism from the state’s opposition party leader, Suvendu Adhikari of the Bharatiya Janata Party. As photographs of the puja went viral on social media, Adhikari tweeted “this heinous act of insulting Maa Durga in the name of artistic liberty won’t be tolerated”. Adhikari demanded action from the state government to “compel the organizers to remove the shoes” before ‘Shashti’, 11th October, failing which, he said the Puja would be boycotted.

Clarifying his stance to Outlook, Adhikari said, “Temples, Gurudwaras and even mosques are sacred spaces. When we enter them, we remove our shoes. How can shoes be used to decorate a puja pandal? Why don’t you ask Bobby (Firhad) Hakim if his community will tolerate Muharram Tazias with shoes on them”? But how much of Adhikari’s opposition is due to religious sentiments being hurt, and how much of it is political? “I have no opinion about their theme. People are free to oppose the policies of my party if they so desire. I only want the shoes to be removed”, said the Nandigram MLA.

Meanwhile, a slew of complaints have been filed against the puja. Kolkata-based Advocate Santanu Singha has lodged a complaint with Lalbazar police headquarters alleging that the pandal is “an insult to the Hindus”. Another advocate Anup Dasgupta has written a letter to the chief and home secretaries seeking the removal of the footwear. Prithvijoy Das, another Kolkata based lawyer with close ties to the BJP has sent the puja a legal notice for “hurting religious sentiments”.

Dumdum Park Bharat Chakra’s general secretary, Pratik Choudhury has responded to the allegations, stating to the press that the photograph posted in social media, which shows sandals installed above the Durga idol was morphed and that the sandals which we have installed were 62 feet away from the Durga idol. The club has refused to make any changes to the pandal and will respond to the legal notice if necessary, he said.

But the surging crowds and long queues at Bharat Chakra’s pandal would seem to imply that Adhikari’s call for a boycott has found few takers. “I don’t need to know how many people are going there”, Adhikari said. “Plenty of people are Hindu only in name but are actually atheists. If such people want to go to the pandal, we have no issues. But from social media posts, I know that 99% of true Hindus are with us”.

Since the club has refused to remove the offending footwear, is the BJP contemplating further action? Adhikari says, “I don’t want to go there with a few thousand people screaming slogans and waving saffron flags to create a scene. This is not what Sanatan Dharma teaches us. We have photographs and videos of the entire puja. Everything has been documented. Priyanka Tibrewal has already written to the Chief Justice of the Kolkata High Court. Once the courts reopen after Puja vacations, we will be filing a PIL”.