The doctors allege that the patient's attendants, on receiving news of his death, breached security and came inside to assault them. 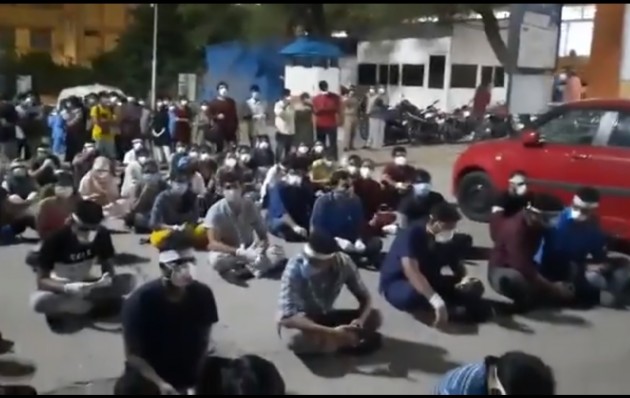 Hyderabad’s Gandhi General Hospital has become a site of protest by junior doctors who have been sitting outside the hospital building since Tuesday evening after attendants of a Covid-19 patient who died allegedly assaulted some of them.

The 55-year-old patient died around 6:30 pm on Tuesday at Gandhi General Hospital, the nodal hospital for treating Covid-19 patients in Telangana. Doctors told the Indian Express that following the patient's death, two of his attendants went inside the hospital breaching security, reached the doctor’s station and beat them with "a plastic stool and an iron rod."

According to doctors, the patient was hospitalised for two days, was severely hypertensive and suffered from uncontrolled diabetes. He was put on a non-invasive ventilator and advised not to leave the bed. However, the patient was found collapsed near the toilet and he could not be revived through CPR. The junior doctors added that they had explained the bad prognosis and very little chance of recovery of the patient to the attendants.

The protests went on till 3 am on Tuesday and then were resumed from 8 am Wednesday.

Contradicting the doctors' claim, North Zone DCP Kalmeshwar Shingenavar told the Indian Express that there was no security lapse and that the attendants were allowed inside the building after they were informed of his death. Shingenavar claimed there was no physical assault that resulted in doctors being injured.

He added that 200 police personnel were deployed in the hospital building. "The incident happened on the spur of the moment. It was also the change of shift for police personnel at that time," he told the newspaper.

A case has been registered against two of the attendants of the patient under  several sections of IPC, Section 3 of Epidemic Diseases Act, 1897, and Section 4 of the Telangana Medicare Service Persons and Medicare Service Institutions (prevention of violence and damage to property) Act, 2008. They were arrested and are being produced before the magistrate, accoridng to the police.

The protesting doctors, who are refusing to return to work, have listed out several demands focused on security, decentralisation, and recruitment. While the Telangana Junior Doctors Association  has demanded deployment of paramilitary forces in accordance with central advisory, doctors are also demanding decentralisation of coronavirus cases to ease mounting pressure on the single hospital. They are also seeking immediate recruitment of specialist doctors, nursing staff, and paramedic staffward boys, among other things.

The doctors, who have been chanting "save the saviors", also submitted a memorandum to the state health minister and chief minister demanding more security and immediate recruitment of additional staff.

Amid the protest, state Health Minister Eatala Rajender urged the doctors to withdraw their agitation and visit him at his office.