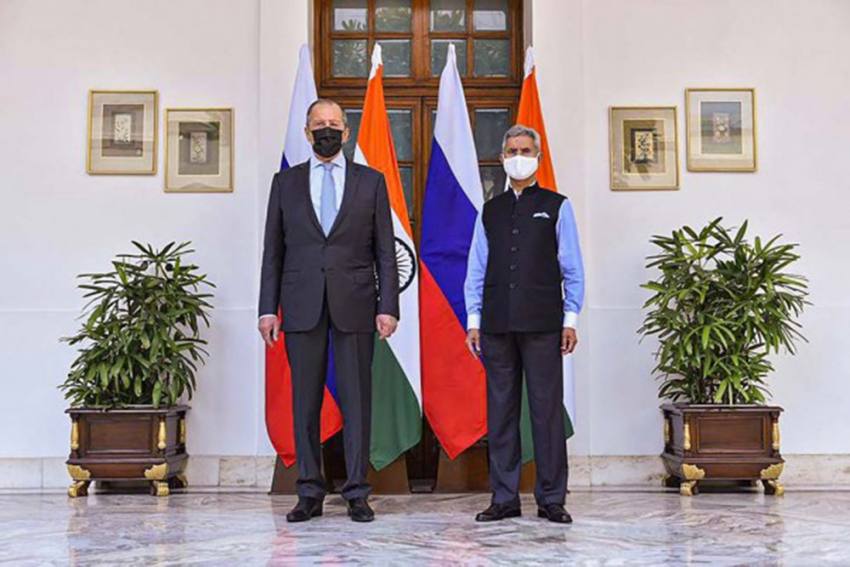 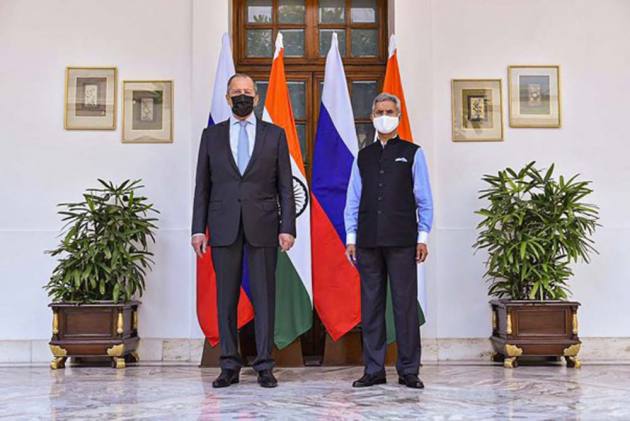 Discussions were “comprehensive and productive”, Jaishankar said after the meeting concluded on Tuesday afternoon.

“We talked about our long-standing partnership in nuclear, space and defence sectors. We also discussed our rapidly expanding energy cooperation and exchanged views on regional, global matters,” Jaishankar said.

The duo also held talks on the countries’ approach to Afghanistan, the minister said, adding, “I shared our viewpoint on the Indo-Pacific.”

Meanwhile, Lavrov said Russia was satisfied with the outcome of the talks adding that they also discussed aspects related to defence cooperation and weapons manufacturing.

The Ministers also discussed the proposed free trade pact between India and the Eurasian Economic Union.

People familiar with the discussions said the Indian side apprised the Russian delegation of its views and apprehensions over China's behaviour in the backdrop of the border row in eastern Ladakh.

At a press conference with Lavrov, Jaishankar, terming the talks "very warm" and "very productive", said much of the discussions covered the preparations for President Vladimir Putin's visit to India for the annual India-Russia summit later this year.

To a question, Lavrov dismissed the possibility of any future military alliance between Russia and China and asserted the cooperation between the two countries was not directed against anyone.

"I am sure deepening of military cooperation serves national interests of both the countries. At the same time, we respect the right of Indian friends to diversify ties in this area," he said and described the outcome of the talks as "satisfactory".

Without elaborating, Jaishankar said, "Our defence sector requirements in the past year were expeditiously addressed."

Asked whether the issue of the US putting pressure on India to not procure Russian weapons systems figured in the talks, he said it did not.

He said the US puts pressure on India and any other country that wants to sign agreement with Russia for procuring weapons.

The Russian foreign minister arrived here on Monday evening on a nearly 19-hour visit amid apparent unease in Moscow over the proactive approach of the Quad member nations, including India, in dealing with geo-political developments in the Indo-Pacific region.

Lavrov is travelling to Islamabad from India.

Jaishankar said both nations understand the importance of the India-Russia relationship to global peace, security and stability and that the review of bilateral ties was "really encouraging".

"I shared our viewpoint on Indo-Pacific. As our prime minister pointed out at the Shangri-La Dialogue some years ago, contemporary challenges require countries to work together in new and different ways," Jaishankar said.

Russia has been critical of the Quad grouping that has been aimed at ensuring a free and open Indo-Pacific against the backdrop of China's growing assertiveness in the region. Quad comprises India, the US, Japan and Australia.

At the press conference, Lavrov dismissed suggestions of any future military alliance between Russia and China.

"We have heard speculation about pro-military alliances not only with respect to Russia and China relations, we have also heard about such alliances allegedly being promoted such as Middle East-NATO, Asia-NATO. Today we exchanged views on this and our Indian friends have the same position as we. We believe this is counter-productive," he said in Russian.

"We are interested in inclusive cooperation that is for something, not against somebody," Lavrov said.

Jaishankar said developments in and around Afghanistan also figured in the talks.

"For India, what happens in Afghanistan impacts its security directly. I shared our approach that a durable peace there would require harmonising interests of all, both within and around that nation."

"The peace process must be based on foundational principles to which we all subscribe. A political solution should mean an independent, sovereign, united and democratic Afghanistan," he said.

The Russian foreign ministry termed the talks "an open-minded exchange of views on most significant issues of the international and regional agenda".

It said both sides stated the similarity of approaches to pressing global and regional problems, including a peaceful settlement in Afghanistan, the Syrian crisis, the situation around Iranian nuclear programme, as well as a common understanding of the principles of shaping a reliable security architecture in the Pacific and Indian Oceans.

Jaishankar said discussions were also held on trade and investment.

"We note the appetite for greater investments in each other by both countries. Russian support for our Gaganyaan programme has progressed which we deeply appreciate," he said, adding the longstanding partnership in nuclear and space sectors figured in the talks.

"Our rapidly expanding energy cooperation that now includes long-term commitments was also on the agenda."

Lavrov said both sides agreed on the need to galvanise work on renewed intergovernmental agreement on mutual security of investments and settlement of issues relating to national currencies.

"We have to launch as soon as possible talks on free trade pact between India and the Eurasian Economic Union based on mutual benefit," he said.