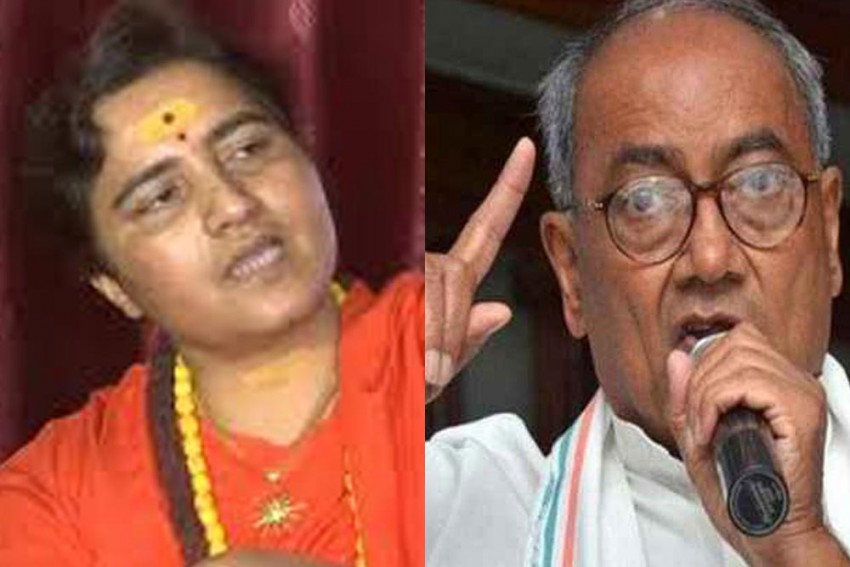 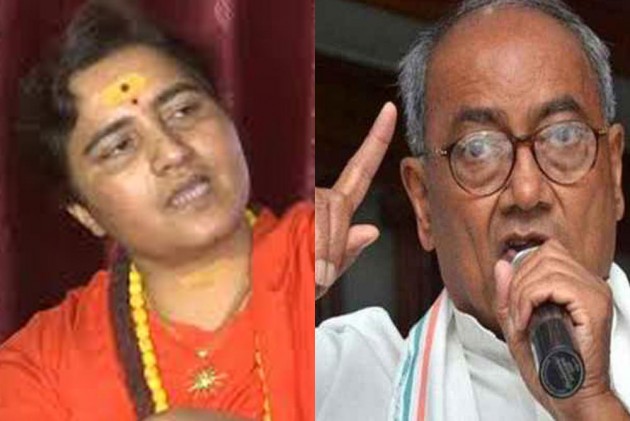 The third phase of polling for eight Lok Sabha seats in Madhya Pradesh will decide the fate of several prominent candidates, including Digvijayaa Singh and Jyotiraditya Scindia, who are the Congress candidates, and the BJP's Sadhvi Pragya Singh Thakur and Union minister Narendra Singh Tomar.

The contest between Congress' Digvijaya Singh and Hindutva activist and Malegaon blast case accused Pragya Thakur in Bhopal will be one of the most keenly watched fights in the election.

They also conducted a roadshow in support of Digvijaya Singh in the state capital to woo voters.

On the other hand, Pragya Thakur highlighted her alleged torture in police custody to win the sympathy of voters in Bhopal, which has been a BJP bastion since 1989.

She also blamed martyred IPS officer Hemant Karkare for her alleged torture in custody and claimed that he died because she cursed him, a statement which was condemned at the national level by all and for which she also apologised and later withdrew it on the ground that it was benefitting her rivals.

Later her statement on demolition of Babri mosque in Ayodhya had also put her in trouble after which the Election Commission imposed 72-hour ban on her campaigning.

In the 2014 Lok Sabha polls, BJP's Alok Sanjar had won from Bhopal with a margin of over 3.70 lakh votes.

Besides, senior Congress leader and former Union minister Jyotiraditya Scindia is in fray again from his traditional Guna seat which he is winning since 2002.

Scindia's wife Priyadarshini Raje campaigned vigorously in the constituency in his absence.

Even his son Mahaaryaman Jyotriaditya Scindia sent a video message to the electorates, urging them to vote for the right candidate in the interest of the region's development.

Scindia's opponent is the BJP's K P Yadav who is contesting his first parliamentary elections.

The Congress leader had won the 2014 Lok Sabha polls with a margin of over 1.20 lakh votes.

In this phase, polling will also be held in Bhind, Gwalior, Sagar, Vidisha and Rajgarh.

From Bhind, the BJP has fielded former MLA Sandhya Rai against Congress' Devashish Jararia, who is contesting his maiden election.

In Gwalior, the BJP is banking on city Mayor Vivek Shejwalkar and the Congress has fielded Ashok Singh.

From Rajgarh, the traditional seat of Congress stalwart Digvijaya Singh, the party has fielded Mona Sustani, who is contesting her maiden Lok Sabha election, against the BJP's sitting MP Raodmal Nagar.

Polling for the eight seats will be held on Sunday from 7 am to 6 pm.