The prime minister took up the cudgels against the Congress for declaring "Emergency" in the country on June 25, 1975. "Democracy was crushed, the press was muzzled, " he said. 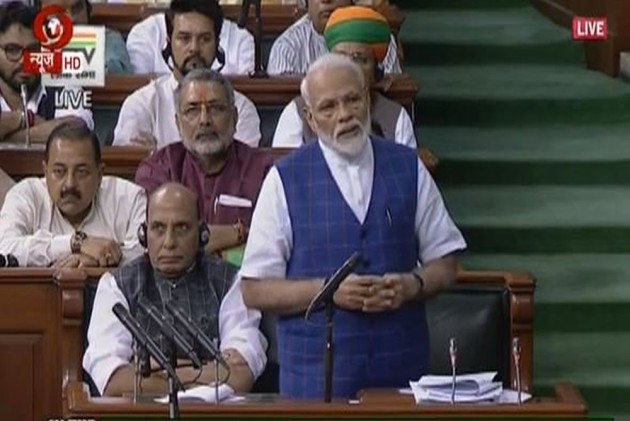 Prime Minister Narendra Modi on Tuesday evening launched into a tirade against the Congress party for declaring "Emergency" in the country on June 25, 1975. "The soul of India was crushed, the press was muzzled, " he said.

Taking potshots at Congress, Modi said the party never recognised efforts of anyone but only the members from the Gandhi-Nehru family.

He said that poverty alleviation and modernization of the country must happen simultaneously.

The prime minister also spoke about the ongoing water crisis in the country, saying, "We have to save water, we will save the lives of common people by saving water. Water crisis impacts the poor and our women the most," adding we will use micro-irrigation to conserve water.

He thanked all the leaders from the Opposition for their speeches in the Lok Sabha and appreciated Speaker Om Birla for having conducted the house.

PM Modi said these elections have shown that more than themselves, the people of India are thinking about the betterment of the country, this spirit is commendable, he said.

"I never think about polls in terms of victory and defeat. The opportunity to serve 130 crore Indians and work to make a positive difference in the lives of our citizens is special to me," PM Modi said.