Chhattisgarh Naxal Encounter: CRPF Jawans Were 'Surprised And Ambushed' After 400 Maoists Surrounded Them From 3 Sides

Chhattisgarh Naxal Encounter:Out of the total 22 fatalities, the CRPF lost eight men including seven CoBRA commandos while one jawan is from the Bastariya battalion, eight from DRG, and five from Special Task Force. 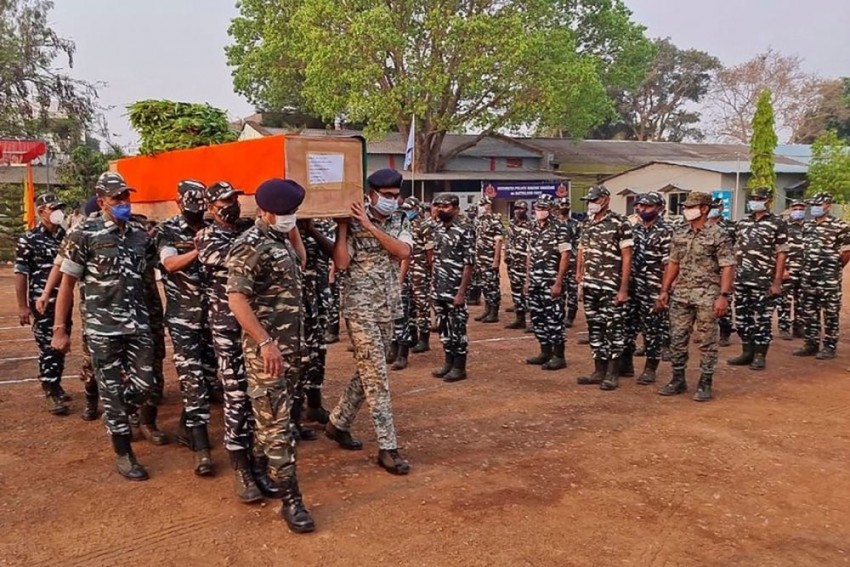 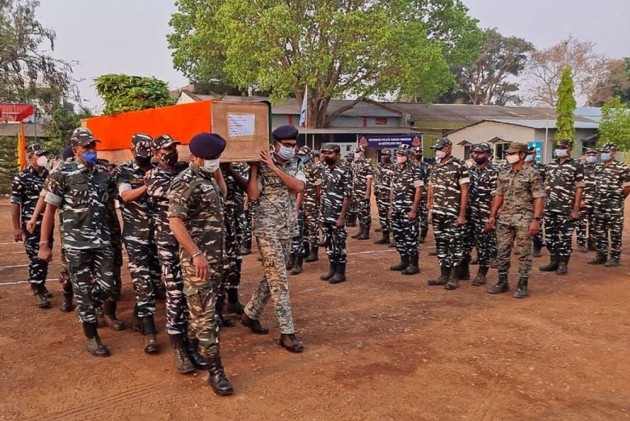 The death toll in the Chhattisgarh Naxal attack climbed to 22 after the bodies of 17 security personnel were recovered from the jungles of Bijapur. The attack on Saturday was the worst ever Naxal attack in four years by an ambush by some 400 insurgents who surrounded the jawans from three sides in an area devoid of vegetation and rained machinegun fire as well as IEDs on them for several hours.

CRPF Director General Kuldeep Singh, who was directed by Home Minister Amit Shah to visit the state, acknowledged that his personnel were "surprised and ambushed" during the attack Saturday that lasted several hours. Other officials in the know of the developments said the forces may have been waylaid by the Naxals.

Out of the total 22 fatalities,  the CRPF lost eight men including seven CoBRA commandos while one jawan is from the Bastariya battalion, eight from DRG, and five from Special Task Force. A CRPF Inspector is still missing, they said on Sunday.

10-12 Naxals are also believed to have been killed in the battle that ensued between the two sides. A total of 31 security personnel were also injured.

Helicopters, which were requisitioned to evacuate the injured personnel, could make the first landing only after 5 PM on Saturday when the gunfire had ended, an official said.

The security personnel took cover behind large trees and kept firing till they ran out of ammunition, he added.

At one location, he added, seven bodies of the troops were recovered and the tree trunks bore bullet marks, indicating that a fierce gun battle took place in the area.

About two dozen sophisticated assault weapons of the slain personnel are also stated to have been looted by the Naxals even as security officials said the search of the area is still on and details are being collected from the ground.

The officials said that an intelligence input had been received that a most dreaded Naxal commander Madvi Hidma was present at Tarrem, an area in bordering Bijapur-Sukhma districts of Chhatisgarh.

Immediately, forces from five different areas -- Tarrem (760), Usur (200), Pamed (195) from Bijapur district, Nimpa (483) and Naraspuram (420) from Sukhama — set out on the intervening night of April 2 and 3 and converged at Junagada where they were ambushed by Naxals in a planned manner at 10 AM on Saturday the officials said,

The gunfight continued till late afternoon and the forces could only evacuate the injured after 5 PM through a helicopter.

Five bodies were recovered on Saturday while the remaining 17 were found on Sunday. All the 22 bodies were taken to Bijapur where medical formalities would be completed followed by a wreath-laying ceremony on Monday. The dead included one sub-inspector, head constables, constables and assistant constables.

Shah, who cancelled his public meetings in poll-bound Assam, chaired a high-level meeting to take stock of the situation. Shah also spoke to Chhattisgarh Chief Minister Bhupesh Baghel. He condoled the death of the security personnel in the encounter and said their valour will never be forgotten.

The government will continue its fight against the enemies of peace and progress, the home minister said.

Singh, the CRPF chief who arrived in the state capital immediately after the massacre, said that "lessons are learnt" from every incident and they will see and analyse "what changes have been brought by the Naxals" to effectively counter them.

Singh said the Maoists are frustrated and troubled because of the induction of five new battalions in the Bastar region of the state recently and the creation of new bases in remote areas like Basaguda, Silger, Jagargunda and Minpa. He said this process will be speeded up now to launch more serious operations against them.

Madvi Hidma alias Hidmanna, who carries a cash reward of Rs 40 lakh on his head, is a homegrown Naxal who heads the first battalion of Maoists active in the Sukma-Bijapur region in south Bastar.

Hidma, in his early 30's, is believed to have led many major operations against the security forces in Bastar.

He is also suspected to be behind the March 11 attack in Sukma district of Chattisgarh in which 25 CRPF personnel were killed and also May 2013 Jeeram Valley ambush on the Congress convoy in which about 32 people including many state Congress leaders were killed.

He is also believed to be behind the Dantewada ambush in April 2010 in which about 76 CRPF troopers were killed.

"The killing of the security personnel while battling Maoist insurgency in Chhattisgarh is a matter of deep anguish. My condolences to the bereaved families. The nation shares their pain and will never forget this sacrifice," he tweeted.

The worst Naxal attack till date is the 2010 strike on security forces where a total of 76 CRPF and state police personnel were killed at the Chintalnar area of Dantewada.

The security personnel have been having bloody battles around the Bastar region of Chhattisgarh that comprises remote districts like Sukma, Bijapur, Kondagaon, Kanker, Narayanpur, Bijapur, Dantewada and Jagdalpur.

A number of incidents have taken place in these regions including the killing of Congress leaders like V C Shukla, Mahendra Karma at Darbha Gati in 2013. This incident saw the death of 8 CRPF personnel and 24 others.

The Maoist movement dates back to 1967 when armed peasants revolted in Naxalbari and later the 'red' cadres of the CPI (Maoist) led the agitation claiming legitimate socio-economic rights for tribal and locals.