Earlier in the day, in a video conference call with Prime Minister Narendra Modi, most of the chief ministers sought an extension of the nationwide lockdown, following which the request was considered, sources said. 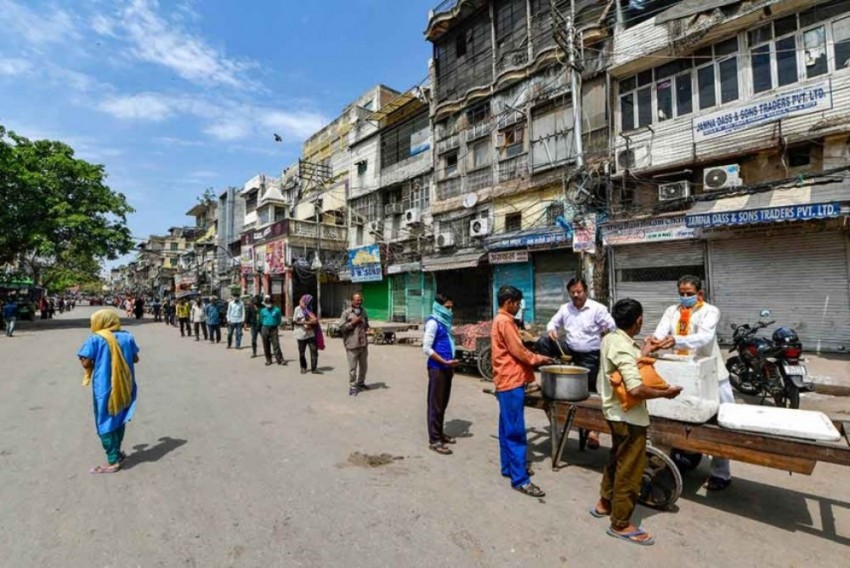 In this file photo, people stand in a queue to collect food during the nationwide lockdown at Khari Baoli in New Delhi. (PTI)
Outlook Web Bureau April 11, 2020 00:00 IST Centre Set To Extend Nationwide Lockdown By Two Weeks As COVID-19 Deaths Near 250-mark 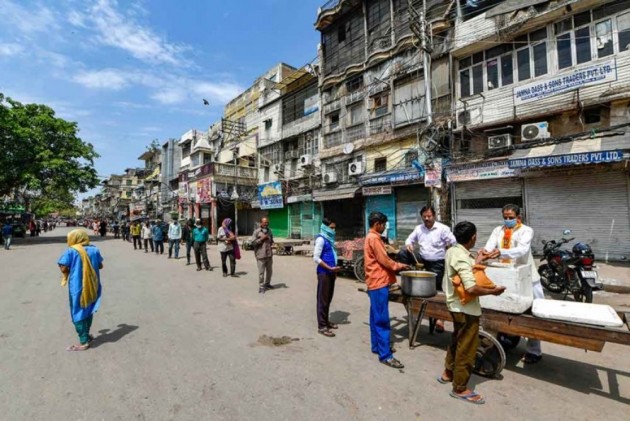 The Centre is all set to extend the nationwide lockdown by another two weeks even as the number of Coronavirus cases continues to rise in India.

The tally of confirmed infections crossed 8,000 with a record increase of over 1,000 cases in the last 24 hours, news agency PTI reported. While worldometer reported 249 deaths in India, PTI put the figure at 264 deaths late Saturday evening. More than 800 people have been cured and discharged so far.

Earlier in the day, in a video conference call with Prime Minister Narendra Modi, most of the chief ministers sought an extension of the nationwide lockdown, following which the request was being considered, sources said. The formal announcement of the extention is expected soon.

While Prime Minister Narendra Modi asked state governments to take steps to curb the lockdown violations and ensure adherence to social distancing, he also announced a shift in focus from 'Jaan hai to jahaan hai' (health is wealth) to 'Jaan bhi, jahaan bhi' (lives as well as livelihoods), which many saw as indications towards relaxations for certain economic activities, including for industrial and agriculture sector.

The next 3-4 weeks would be critical to determine the impact of steps taken till now to curb the virus spread, Modi told the chief ministers.

During their interaction, several chief ministers demanded financial and fiscal relief from the Centre to fight the pandemic, while Modi suggested measures to incentivise direct marketing of farm produce to help farmers, among other steps to help the country remain healthy and to prosper too. West Bengal Chief Minister Mamata Banerjee said the states have demanded Rs 10 lakh crore package.

Modi also said the crisis is an opportunity to become self-reliant and turn the nation into an economic powerhouse.

Delhi Chief Minister Arvind Kejriwal said extending the lockdown was the correct measure. "Today, India’s position is better than many developed countries because we started lockdown early. If it is stopped now, all gains would be lost. Toconsolidate, it is imp to extend," he tweeted.

On the exit plan from the lockdown, Modi said there seems to be a consensus amongst the states on an extension by another two weeks, but underlined that the government wants to not only save lives but also livelihoods.

"While announcing the lockdown, I had said 'jaan hai to jahan hai'... Most people in the country understood it and discharged their responsibilities by remaining indoors. And now it is imperative to focus on both aspects, 'Jaan bhi Jahan Bhi', for India's bright future, and prosperous and healthy India," Modi said.

While Modi asked states to curb violations to the lockdown conditions, the Union Home Ministry separately has written to the West Bengal state administration, flagging a "gradual dilution" of lockdown in the state including by allowing permission to hold religious gatherings and keep open shops of non-essential goods.

More than 1.6 million people have been infected around the world and the death toll hit 100,661 on Friday -- nearly 70 per cent in hard-hit Europe.