The decision comes after the Supreme Court said overcrowding of prisons was a matter of serious concern, particularly in the wake of Coronavirus. 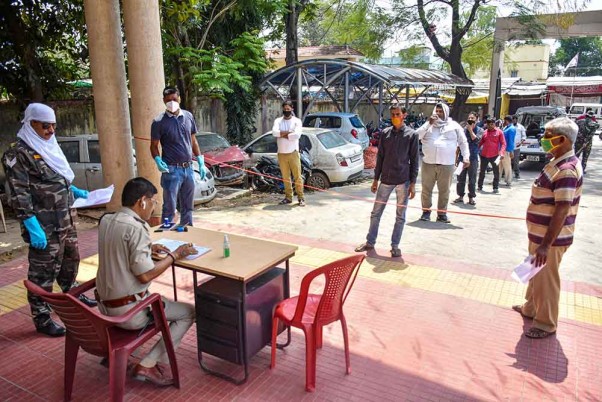 A police official lists complaints of the people outside a police station during a lockdown in the wake up of coronavirus pandemic, in Ranchi.
Representational Image By PTI
PTI 2020-03-28T19:14:30+05:30 Coronavirus: Uttar Pradesh To Release 11,000 Prisoners On Parole To Decongest Jails

The Uttar Pradesh government has decided to free 11,000 prisoners lodged in 71 jails in the state amid the COVID-19 outbreak in the country, an official statement stated on Saturday.

The decision comes after the Supreme Court earlier this week directed all states and union territories to constitute high-level committees to consider releasing on parole or interim bail prisoners and undertrials for offences entailing up to 7-year jail term to decongest prisons in the wake of coronavirus pandemic.

The top court had said overcrowding of prisons was a matter of serious concern, particularly in the present context (of coronavirus).

"In compliance with the orders of the Supreme Court, a committee was formed by the state government, which held its sitting on March 27 under the chairmanship of Justice Pankaj Kumar Jaiswal,” the statement issued by the Uttar Pradesh government said.

“The committee directed that undertrials lodged in 71 jails of the state in crimes, whose maximum punishment is of 7 years, be given 8-week interim bail on a personal bond, and immediately freed from the jail,” it said.

"Convicts who have been punished for 7 years or less, should be released on 8-week parole on a personal bond, and immediately freed from the jails," the statement added.

Till Thursday, Uttar Pradesh has reported 41 COVID-19 cases, according to the Union health ministry.