As the police have launched a manhunt to trace Tablighi Jamaat chief, sources say he has gone into quarantine in an undisclosed place. 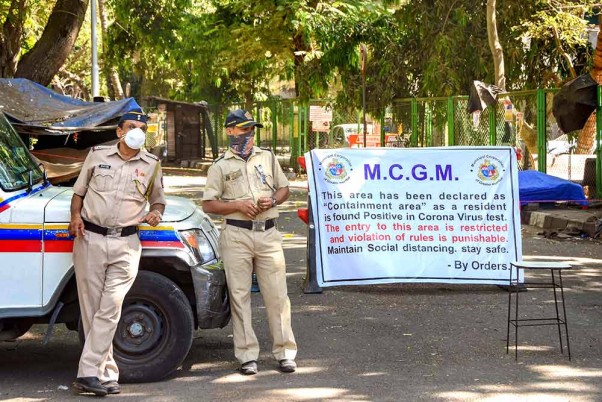 Police personnel stand guard on a road leading towards the building at Adarsh Nagar, where two new positive cases of Covid-19 were reported, at Worli in Mumbai.
Representational Image By PTI
IANS April 02, 2020 00:00 IST Tablighi Jamaat Chief In Quarantine As Police Launch Manhunt To Trace Him: Sources

Even as Maulana Saad Khandhlawi, the chief of Tablighi Jamaat, continues to elude the police, sources close to him on Thursday said that he has gone into quarantine in an undisclosed place. The Delhi Police's crime branch has been conducting raids at several places in the national capital and in Uttar Pradesh also since Wednesday.

According to police sources quoted by news agency IANS, crime branch teams are conducting raids in Muzaffarnagar and Shamli districts of Uttar Pradesh with the help of the local police. So far raids have also been held in three of his residences in Delhi's Zakir Nagar and Nizamuddin.

Caught in the eye of a storm over sheltering more than 2,000 religious followers in a Delhi mosque during the COVID-19 lockdown, the Amir (chief) of Tablighi Jamaat, Maulana Saad Khandhlawi has been a controversial Muslim cleric for years.

Maulana Saad who claims to have over 100 crore followers in nearly 200 countries, functions from Nizamuddin mosque, which serves as a global Markaz (centre) of Tablighi Jamaat.

Deemed as one of the most influential movements in the Muslim world, Tablighi Jamaat was established by Maulana Muhammed Ilyas Khandlawi, the great grandfather of Maulana Saad. Tablighi Jamaat was an offshoot of the Deoband movement and aims at revival of the true Islam as perceived by the Prophet Mohammed.