Coronavirus Explainer: How Grave Is The Threat And How To Prevent 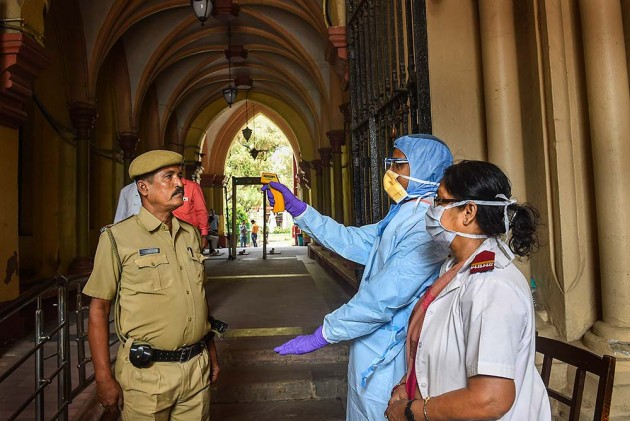 The novel coronavirus has killed over 7000 people globally and is currently spreading fast in India leading to a significant increase in demands for face masks and hand sanitizers.

India has so far recorded 151 cases and three deaths in the virus outbreak, which still does not have a vaccine. Citizens have been told to avoid all non-essential overseas travel and large social gatherings, with more stringent restrictions expected in the coming days.

Schools, colleges and public spaces like museums, monuments, religious shrines, cinema halls, bars and restaurants have been shut in several states including Maharashtra, which has reported highest number of cases in India.

Helpline Numbers For Coronavirus In All States, Union Territories Of India

The World Health Organization (WHO) has declared the Covid-19 a pandemic. It has infected more than ...... people worldwide after the outbreak emerged in late December in Wuhan, an industrial and transport hub in China.

The virus has spread over 70 countries. Asian hotspots China and South Korea have seen new infections and deaths level out in recent weeks -- China reported just one new domestic case for the second consecutive day on Wednesday -- but numbers are ballooning across Europe.

Near-total lockdowns have been imposed in Italy, Spain and now France with strict restrictions on people’s movement. Germany has banned gatherings in churches, mosques and synagogues and said playgrounds and non-essential shops would close, too.

Here’s a guideline on the deadly virus and how to prevent it.

What is the new coronavirus?

Coronaviruses (CoV) are a large family of viruses transmitted from animals to humans and cause illness ranging from the common cold to more severe diseases such as Middle East Respiratory Syndrome (MERS-CoV) and Severe Acute Respiratory Syndrome (SARS-CoV), according to the World Health Organisation (WHO). The recent one, known as Covid-19, is a new strain that has not been previously identified in humans.

How does it spread?

The virus has been understood to spread mainly from person-to-person and can be transmitted by exposure to a sick person's saliva, sneeze, or by shaking hands with him/her. It can also be contracted by touching surfaces that have traces of virus and afterwards touching your own nose, eyes or mouth.

The symptoms for the deadly viral disease include headache, runny nose, cough, sore throat, fever, sneezing, fatigue and other such traits of a common cold. But it can also show symptoms like exacerbated asthma, pneumonia and bronchitis.
The WHO says, “stay home if you feel unwell. If you have a fever, cough and difficulty breathing, seek medical attention and call in advance. Follow the directions of your local health authority.”

How to prevent coronavirus spread?

The best way to prevent illness is to avoid being exposed to this virus as it has no vaccine yet. Preventive measures have been charted out by experts and authorities to help people stay safe. These include observing personal hygiene such as regularly washing hands or using a hand rub with at least 60% alcohol. The WHO underlines the need to not touch your face with unsanitary hands.

Try to avoid close contact with people showing symptoms of illness, especially of having cold. WHO recommends maintaining at least 1 metre (3 feet) distance between yourself and anyone who is coughing or sneezing. Governments of affected countries, including India, have advised people to maintain “social distance” by avoiding group activities, large gatherings and events.

The WHO also stresses good respiratory hygiene. This means covering your mouth and nose with your bent elbow or tissue when you cough or sneeze and then disposing of the used tissue immediately.

Is the mask effective?

There is no proof or comprehensible study supporting the effectiveness of face masks against the coronavirus.

The WHO says it is advisable to wear a protective mask in public only if you suspect you are infected or someone you are caring for is, in which case the advice is to stay home. There are already shortages of masks for medical professionals around the world, a problem that could get worse as the pandemic drags on.

According to a health ministry document, "Medical masks should not be used by healthy persons who are not having any symptoms because it creates a false sense of security that can lead to neglecting other essential measures such as the washing of hands." It warns that erroneous use of masks or continuous use of a disposable mask for longer than 6 hours or repeated use of the same mask may actually increase risk of getting an infection.

However, it says non-medical workers should use a mask while visiting a healthcare facility, caring for an ill person, and if they are close family contacts of suspect/confirmed cases undergoing home care.