No passenger train will originate from any railway station in the country from midnight to 10 pm on Sunday while all suburban train services will be reduced to a bare minimum as well. Metro services, including in Delhi, will remain suspended for the day. 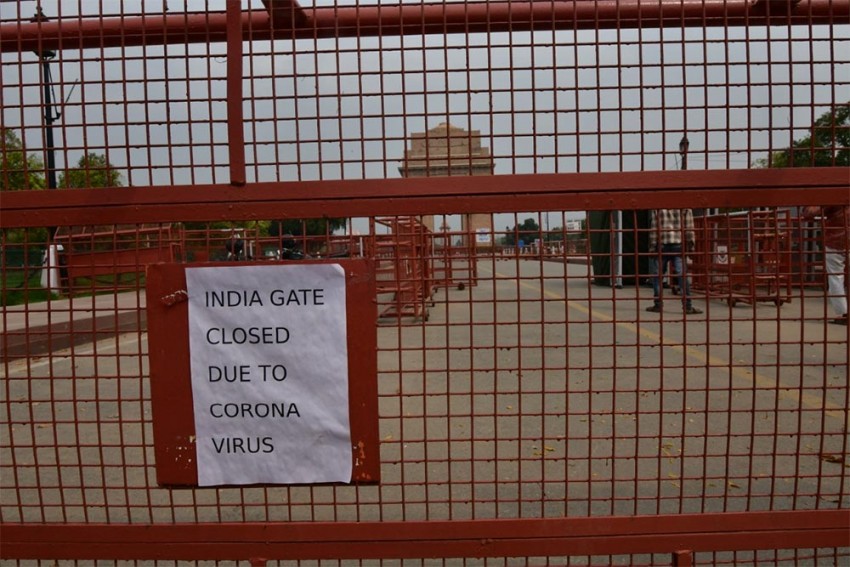 A notice put up at a barricade reads, India Gate closed due to coronavirus, to prevent mass gathering of tourists and locals amid fear of spread of the virus, at India Gate in New Delhi. (Tribhuvan Tiwari)
PTI March 21, 2020 00:00 IST Coronavirus: Cases In India Rise To 283; Amid Fear, Country To Observe 'Janata Curfew' Tomorrow 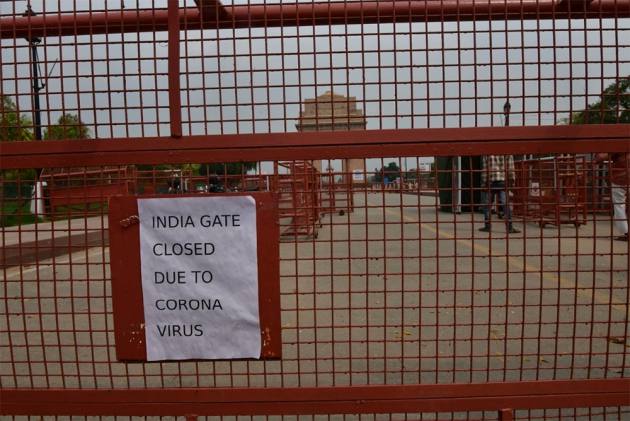 The country will be observing an unprecedented shutdown on Sunday following Prime Minister Narendra Modi's appeal for a 'Janata curfew', where people have been urged to voluntarily stay indoors to check the spread of coronavirus while public transport will be suspended or curtailed and all markets and shops except those dealing in essential items will be closed on the day.

Cutting across party lines, chief ministers and others leaders urged the people to follow the self-imposed curfew from 7 am to 9 pm, noting that "social distancing" was key to breaking the chain of infection, as the number of coronavirus cases rose to 283 after 60 new cases were detected on Saturday, the highest so far in a day, and states like Maharashtra, Odisha and Bihar imposed partial lockdown till month end.

No passenger train will originate from any railway station in the country from midnight to 10 pm on Sunday while all suburban train services will be reduced to a bare minimum as well. Metro services, including in Delhi, will remain suspended for the day.

Traders' body Confederation of All India Traders (CAIT) has announced that they will keep their establishments shut across the country on Sunday.

From suspending regular prayers involving large gatherings in shrines of various faiths, including Sunday mass, to disallowing jail inmates from meeting their families on the day, organisations and institutions in every sphere have announced restrictions for Sunday.

Modi had on Thursday called for the 'Janata curfew' from 7 am to 9 pm on March 22, saying no citizen, barring those in essential services, should get out of their houses, and asserted that it will be a litmus test to show India's readiness to take on the coronavirus challenge.

Describing it as the need of the hour, Union Home Minister Amit Shah asked everyone in the country to support the step.

In a series of tweets, Shah also asked all citizens to express gratitude to those who are working round the clock to keep the country safe and healthy amid the pandemic.

Vice President M Venkaiah Naidu too made a fervent appeal to the people of the country to confine themselves to homes on Sunday.

He said that since the virus spreads through physical contact, social distancing is an effective measure to contain its spread by avoiding contact during the incubation period of the virus.

"Janata curfew should be seen in the largest context of the initiative to insulate people with their voluntary involvement. It is a matter of great assurance that people have responded very positively to Prime Minister Narendra Modi's appeal. People remaining idoors and social distancing are part of measures to curb the contagion virus," Union Minister Ravi Shankar Prasad said on Saturday.

In Delhi, Chief Minister Arvind Kejriwal said 50 per cent of the buses will ply on roads on Sunday considering some people may have to travel due to an emergency.

Autos and taxis will, however, be off roads in the national capital as several unions including the Delhi Autorickshaw Sangh, Delhi Pradesh Taxi Union, Delhi Auto Taxi Transport Congress Union and Delhi Taxi Tourist Transport Association, have decided to join the 'Janata curfew'.

Uttar Pradesh Chief Minister Yogi Adityanath appealed to the people of the state to stay indoors on Sunday.

"Coronavirus is in the second stage all over the country. It will convey a big message to the entire world if we are successful in stopping this at this stage.

"To curb this infection, we are working on a war footing. Isolation wards have been set up in every district hospital and medical college. So far, 23 patients have been identified in the state, out of which nine have completely recovered. There is no need to panic, but prepare yourself to fight against this challenge," the UP chief minister said in the statement.

Leaders and other prominent personalities also urged the traders not to hoard essential items and the people to purchase only necessary things.

"We can prevent the virus entering third stage if people stay indoors and for that Prime Minister Narendra Modi has announced Janata Curfew on March 22," Tamil superstar Rajinikanth said in a video message.

Archbishop of Goa Filipe Neri Ferrao cancelled the Sunday mass at all churches in support of the call for "janata" curfew to fight the Covid-19 pandemic.

In Delhi too, St Peter's Mar Thomas Syrian Church, Patparganj and Cathedral Church of Redemption in central Delhi have cancelled Sunday mass and all services for next week, sources said.

Prominent Islamic seminary Darul Uloom Deoband in Uttar Pradesh said it will remain closed on March 22 and asked its students not to venture outside.

The Jammu and Kashmir Waqf Board announced suspension of regular prayers at mosques and shrines affiliated to it in the Kashmir valley as a preventive measure to contain the spread of the coronavirus.

On Saturday, the prime minister thanked various organisations and business bodies for their efforts to contain the spread of coronavirus.

"Never forget -- precautions not panic!" he said adding that it is not only important to be home but also remain in the town/ city where you are.

"Unnecessary travels will not help you or others. In these times, every small effort on our part will leave a big impact," Modi said reacting to tweets by people on the virus.

This is the time we should all listen to the advice given by doctors and authorities, he said.

"All those who have been told to stay in home quarantine, I urge you to please follow the instructions. This will protect you as well as your friends and family," he said.

The prime minister also shared a video which showed how virus spreads and ways to check its outbreak taking small precautions.

The Odisha government on Saturday announced a "near total" shutdown in five districts and eight other prominent towns for a week.

These districts are Khurda, Ganjam, Cuttack, Kendrapara and Angul, while the towns include Puri, Sambalpur, Jharsuguda, Balasore, Rourkela, Bhadrak, Jajpur Road and Jajpur.

The Bihar government ordered shutting down of bus services, restaurants and banquet halls across the state till March 31. All schools and malls are already closed in the state.

Stay Wherever You Are To Stop Coronavirus From Spreading: PM Modi's Message To Country