Congress Stares At Wipe Out In Madhya Pradesh, Will Kamal Nath Govt Topple Too?

Just five months after it barely succeeded in ending the BJP's 15-year rule in Madhya Pradesh, the Congress party has been stunned by possible rout across the state's 29 Lok Sabha seats. 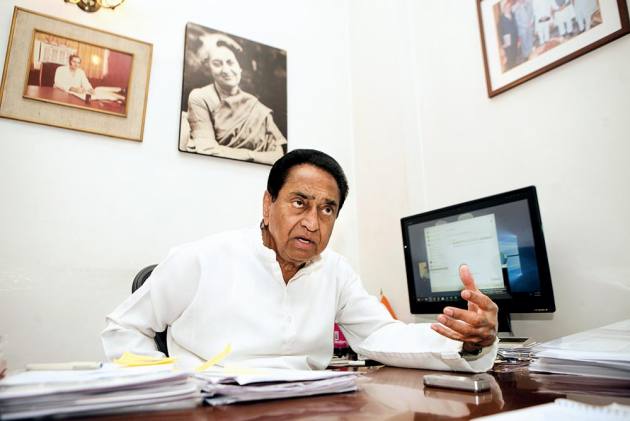 While the defeat in the Lok Sabha polls is shocking in itself for the Congress party, the more worrying fear for Madhya Pradesh chief minister Kamal Nath is whether his government that doesn't enjoy a clear majority in the state Assembly will survive the aftermath. The Congress had won 114 seats in the December Assembly polls, stopping two legislators short of a simple majority in a house of 230 members. It crossed that mark with the support of two MLAs from the BSP, three independent legislators and one Samajwadi Party MLA.

The BJP's Leader of Opposition in the MP Assembly, Gopal Bhargava, has already written a letter to the Governor and Speaker requesting for an urgent session to be convened. Bhargava claims that the Nath government has lost its majority and must face a floor test at the earliest. BJP sources in the state have told Outlook that Bhargava and several other leaders of the party have been in touch with the BSP, SP and independent legislators supporting the Nath government. Worse, sources say, some disgruntled Congress MLAs who were not accommodated by Nath in his cabinet have also received calls from the BJP.

The other major setback for the Congress seems to be coming from the Guna parliamentary seat where Jyotiraditya Scindia, the high-profile AICC general secretary and scion of the erstwhile Gwalior royal family, is trailing behind BJP’s Krishnapal Singh, a political greenhorn compared to his rival. Besides Chhindwara, Guna was the only other parliamentary seat that the Congress had won in MP in 2014, but the Congress fortress that has never let down a candidate of the Gwalior royal family in the past seems to be breaking its tradition this time round.

In Bhopal, the constituency that came into international prominence this election season because of the BJP’s decision to field terror-accused Sadhvi Pragya against Congress candidate and former MP chief minister Digvijaya Singh, the saffron tsunami continues. The Congress has not won the Bhopal seat since 1989 and was hoping that Singh’s candidature would break the jinx. That too doesn’t seem to be happening.

Across the state, the Congress had, for a change, risen above its famous factional feuds this time round and fielded good candidates with a mass base who were capable of putting up a strong fight. The party’s internal surveys too had suggested that it could win at least 12 of the state’s 29 seats while putting up a tough fight in the remaining constituencies. None of those surveys seem to be reflecting in the trends so far.

While the Congress is set for a rout in the state and at the national level too, the fear that it may now lose control of Madhya Pradesh – one of the few states where it is in power – is clearly not misplaced. The days ahead will determine whether the shrewd Nath, known to be resourceful and extremely politically savvy, will survive the challenge.

In The Middle Of Saffron Storm, Punjab Stands Firm With Congress