At one point, Nitesh Rane and his supporters were seen attempting to tie the sub-engineer to the under-construction bridge, ostensibly to teach him a lesson. 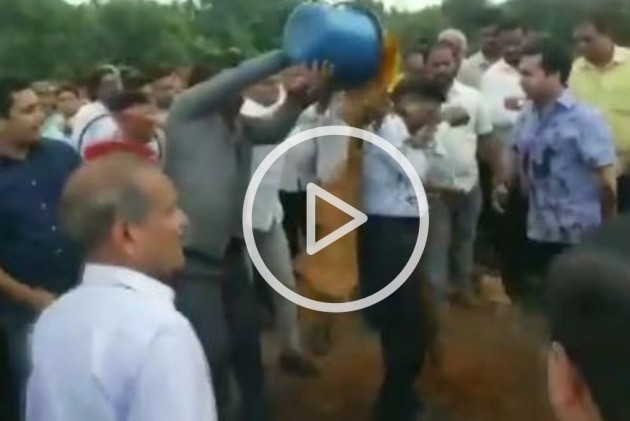 Irked over the poor condition of the Mumbai-Goa highway, Congress legislator Nitesh Rane and his supporters vented their ire on a road sub-engineer by bathing him with wet mud and slime, and even attempted to tie him to a bridge in Sindhudurg on Thursday.

Rane, the son of former Maharashtra chief minister Narayan Rane, accompanied by Kankavli Municipal Council President and activists of the NDA-affiliated Maharashtra Swabhiman Party (MSP) had gone to inspect road repairs being carried out on a stretch of the bridge on the Gad River near Kankavli.

They accosted the sub-engineer, Prakash Shedekar, questioning him on the bad condition of the roads and protested how the people had to battle slime and mud daily, and the potholed roads routinely.

#WATCH: Congress MLA Nitesh Narayan Rane and his supporters throw mud on engineer Prakash Shedekar at a bridge near Mumbai-Goa highway in Kankavali, when they were inspecting the potholes-ridden highway. They later tied him to the bridge over the river. pic.twitter.com/B1XJZ6Yu6z

"People are bearing it daily... Now, you also experience it..." they said and threw a couple of buckets full of slime on Shedekar, roughed him up and pushed him around.

They demanded to know "who has given you the right to sink Kankavli under slime" and some activists took him around in the wet mud to show him the ground reality.

At one point, Rane and other activists were seen attempting to tie Shedekar to the under-construction bridge, ostensibly to teach him a lesson.

Videos of the incident went viral on social media evoking mixed reactions, with many condemning the incident.