Opposing the Farm bills, Congress MPs staged a protest in front of Mahatma Gandhi's statue in Parliament Complex and raised slogans against the government. 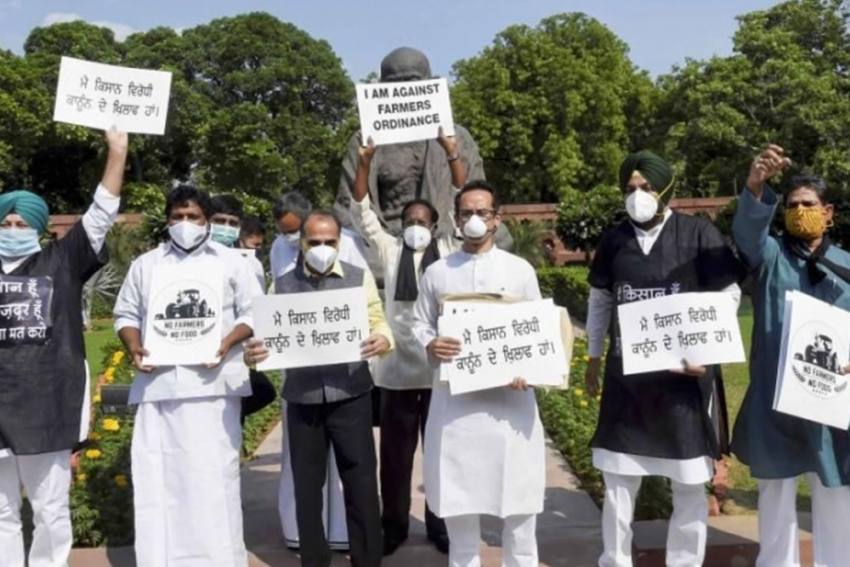 Some Congress MPs from Punjab also burnt copies of the farm bills brought in by the government inside the Parliament Complex.
PTI
PTI 2020-09-18T12:03:34+05:30 Congress MPs From Punjab Burn Copies Of Farm Bills, Party Protests In Parliament 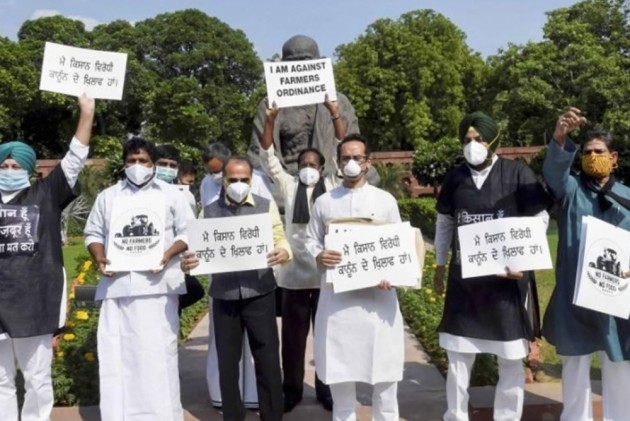 The Congress on Thursday said the farm sector legislations brought in by the government defeat the purpose of the Green Revolution and will be "a death knell for the future of farming" as it alleged that the Modi dispensation, akin to the coronavirus pandemic, was attacking lives and livelihood of farmers.

Opposing the bills, Congress MPs staged a protest in front of Mahatma Gandhi's statue in Parliament Complex and raised slogans against the government.

Some Congress MPs from Punjab also burnt copies of the farm bills brought in by the government inside the Parliament Complex.

Lok Sabha passed by voice vote the Farmers' Produce Trade and Commerce (Promotion and Facilitation) Bill, 2020 and the Farmers (Empowerment and Protection) Agreement on Price Assurance and Farm Services Bill, 2020.

It has already passed Essential Commodities (Amendment) Bill. They will replace ordinances promulgated by the Union government.

In a tweet in Hindi, Congress leader Rahul Gandhi said, "Modi ji promised to double farmers' income. But the Modi government is bringing 'black laws' to economically exploit the farmers and agriculture labourers. This is a new form of 'zamindari' and some of Modi ji's 'friends' will be the new 'zamindars' of new India. Once the agriculture markets are finished, food security of the country will be erased."

Congress deputy leader in Lok Sabha Gaurav Gogoi said, "This Government has been eying, how they can take the farmers’ land to benefit their capitalist friends, whether is the Land Acquisition Act, whether in the industrial system through the weakening the labour courts and now this three pronged attack on the Indian Agricultural system through the two bills on farming."

Congress MPs Jasbir Singh Gill, Ravneet Singh Bittu, Gurjit Singh Aujla and Amar Singh burnt copies of the bills and said they will oppose the proposed legislations tooth and nail. They also wore black robes, saying "I am a farmer and farm labourer and don't betray me".

Addressing a joint press conference at the Vijay Chowk, Congress leaders Adhir Ranjan Chowdhury, Randeep Surjewala and Gaurav Gogoi alleged it is "a conspiracy" of the Modi government to defeat the Green Revolution.

"The Modi government is akin to Corona pandemic as it is attacking lives and livelihoods of farmers. It is attacking farmers and farm labourers and was bartering agriculture at the doorsteps of crony capitalists," they said in a joint statement.

"The draconian laws on agriculture will be a death knell for the future of farming in India," they said, alleging that the BJP-led government is hell-bent upon destroying the 'annadaata' farmer and was bartering the agriculture at the altar of a handful of crony capitalists.

Surjewala claimed 62 crore farmers and farm labourers have been agitating across India and over 250 farmers’ organisations are sitting in dharna, on hunger strikes and are demonstrating across the length and breadth of India.

Drunk with power and determined to serve the crony capitalists friends, Prime Minister Narendra Modi continues to be blind to the agony of the farmers and suppress every voice of protest. The Modi government is dictatorially subverting the voice of farmers' representatives inside the Parliament and has unleashed a draconian 'lathi-danda regime' on protesting farming community," he said.

"The 'annadata' farmer and labourers will never forget the conspiracy of the Modi government to convert 'the disaster confronting the farmers' into an 'opportunity for the capitalists' under the garb of pandemic. The next generations of BJP will have to face the consequences of these anti-farmer misdeeds of the government," Surjewala said.

Chowdhury said the interest of farmers and farm labourers cannot be subjugated and be subservient to the "draconian majority" of the BJP in Parliament.

"The Congress shall continue to take on the dark design of a draconian, dictatorial and anti-farmer Modi government, both inside and outside the Parliament.... We shall continue to voice the pain and suffering of teeming millions," he said.

During the protest by Congress MPs in front of Mahatma Gandhi's statue in Parliament Complex, Chowdhury said the farmer community in the country is under severe stress due to the "anti-farmer" and "wrong" policies of the NDA government.

The Punjab MPs of Congress criticised the Shiromani Akali Dal (SAD) leadership for being in the BJP-led NDA even after these bills were proposed by the government.

"We will oppose these bills from Parliament to panchayats. We also appeal to all MPs to vote against the bills, hearing the inner voice of their conscience for the sake of 'zameer and zameen' (conscience and land)," Jasbir Gill said.

Surjewala said the biggest flaw in the contract farming ordinance is that giving Minimum Support Price (MSP) is not mandatory.

"When the Mandi System is abolished, then farmers will be solely dependent on contract farming and the big companies will decide the price of the farmers' crop on his field at their own will. If this is not a new ‘Zamindari System’, then what else can it be?" he asked.