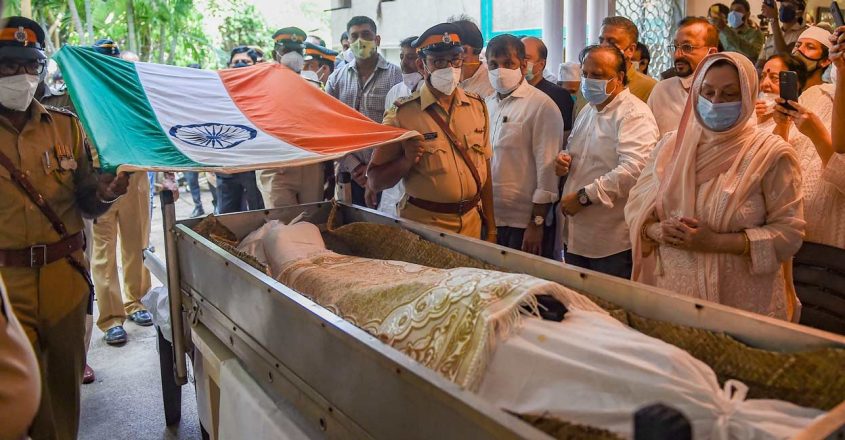 Indian cinema stalwart Dilip Kumar on Wednesday was cremated with full state honours in Mumbai. His tragic demise demarcates the culmination of an illustrious career as one of Indian cinema's most loved icons.

The verteran actor, who passed away after sufferring from prolonged illness, was laid to rest around 4:45 PM in the presence of family, including actor wife Saira Banu.

According to the actor's family friend Faisal Farooqui, Kumar's nephew actor Ayub Khan and Banu's nephew among other relatives were present at the cemetery for the funeral.

While not more than 25-30 people were allowed inside the Qabrastan, the venue was packed with media and fans of the late star. The crowd, of nearly 100 people, was being controlled by the police.

Those who could not make it to the funeral stood on their rooftops to catch a glimpse of the late star.

Post the funeral, megastar Amitabh Bachchan and son Abhishek Bachchan visited the Juhu Qabrastan to pay their respects to Kumar.

As per the state funeral protocols, Kumar's body was draped with the tricolor at his Pali Hill residence, before being moved to the burial ground.

More than 60 policemen were present at his residence. Adequate security measures were taken by the police to prevent people to enter the lane leading to Kumar’s house.

Born as Yousuf Khan in Peshawar on December 11, 1922, Kumar was known to generations of film-goers as the "tragedy king."

Filmmaker Subhash Ghai, who directed Kumar in movies like "Saudagar" (1991) and "Karma" (1986) also came for the funeral but COVID protocols prevented him to go inside.

The Hindi cinema veteran, the last of the golden troika with Raj Kapoor and Dev Anand and one of India’s most venerated stars, was admitted to hospital last month following episodes of breathlessness.

The actor had been battling ill health for the last few years, including advanced-stage prostate cancer and lung disease, and had been in and out of the hospital.

The first of the Khans, as he was sometimes referred to, was nominated to the Rajya Sabha for one term, awarded the Padma Bhushan and the Padma Vibhushan and also served as sheriff of Mumbai. He was also honoured with the Dadasaheb Phalke award.