In the picture released by the Maoists, Manhas can be seen sitting on a plastic mat under a temporary shelter, possibly at a Maoist camp.

The CPI (Maoists) on Wednesday released a picture of CoBRA jawan Rakeshwar Singh Manhas to show he is in their custody. The picture was released a day after the Dandakaranya Special Zonal Committee (DSZC) of the banned organisation issued a press note asking government-mandated interlocutors to whom the jawan would be handed over to.

In the picture released by the Maoists, Manhas can be seen sitting on a plastic mat under a temporary shelter, possibly at a Maoist camp.

Rakeshwar Singh Manhas went missing after the April 3 ambush in Chhattisgarh's Bastar region. The ultras have asked the state government to appoint interlocutors for his release.

The Maoists have, however, not raised any formal demands for the release of the commando. Police are verifying the authenticity of the statement, purportedly issued by the outlaws. 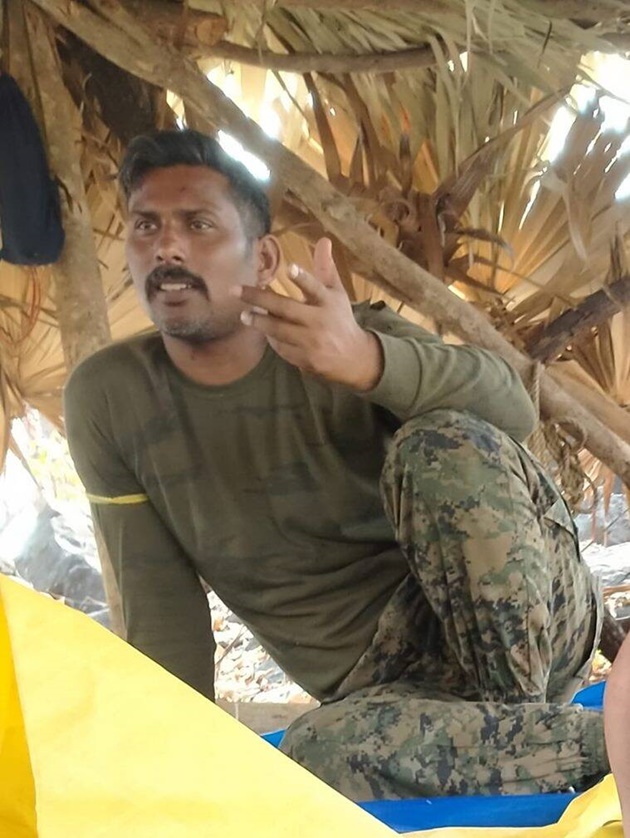 The banned outfit also admitted that four of its cadres were killed in the encounter in which 22 security personnel had lost their lives.

Constable Rakeshwar Singh Manhas of the 210th CoBRA battalion, an elite unit of CRPF, had gone missing after the gunfight along the border of Sukma and Bijapur districts last Saturday.

The CPI (Maoist) statement also claimed that 24 security personnel were killed in the encounter.

"As many as 2,000 police personnel had reached near Jiragudem village to execute a major attack (on Saturday). To thwart them, PLGA (Peoples' Liberation Guerilla Army) retaliated during which 24 security personnel were killed and 31 others injured. We have caught a policeman (CoBRA commando) at the spot while others escaped," said a statement purportedly written by Maoists and being circulated on social media on Tuesday.

It said the government should first announce names of interlocutors and the jawan will be released later. He will remain safe in our captivity till then, it said.

The two-page statement was issued in the name of Vikalp, spokesperson of the Dandakaranya Special Zonal Committee (DKSZC) of Maoists, which had been instrumental in executing several deadly attacks in south Bastar, including the Jhiram valley attack in Bastar district on May 25, 2013, in which top Congress leaders of Chhattisgarh unit were killed.

Maoists admitted that four cadres were killed in the Bijapur gunfight and the body of the slain woman cadre could not be retrieved from the spot. The body of a woman Naxal was recovered by security forces from the encounter spot.

The ultras also claimed to have seized 14 weapons, 2,000 cartridges and other materials from the encounter site.

The photographs issued with the purported statement shows the looted arms and ammunition.

However, sources in police had said at least 12 Naxals were killed in the gunfight that lasted for over 4 hours.

According to the police, ten weapons, including seven AK-47 rifles, two SLR rifles and one Light Machine Gun (LMG), of the security personnel went missing after the attack.

Meanwhile, a senior police officer said the authenticity of the statement is being verified.

"The authenticity of the statement issued by Maoists claiming that they have held hostage the jawan is being verified. Further action will be taken accordingly," Inspector General of Police (Bastar range) Sundarraj P told PTI.

Police have been continuously carrying out searches to trace Manhas, and local villagers, social organisations, local public representatives and journalists are also being contacted to locate his whereabouts, the IG said.

Tribal Activist Soni Sori has appealed to Naxals to release the jawan if he is in their captivity.

"If they delay releasing the jawan, then I will head towards the encounter site on Wednesday and will try to talk to them (Maoists) to free him," Sori said.

Manhas was part of a squad that had gone for an anti-Naxal operation on Friday night in the jungles on the Bijapur and Sukma border. On Saturday, the gunfight broke out between security forces and ultras between Tekalguda and Jonaguda villages in which 22 troopers were killed and 31 others injured.

Out of the 22, the Central Reserve Police Force (CRPF) lost eight personnel, including seven CoBRA commandos and one jawan from its Bastariya battalion, eight from the DRG and six from the Special Task Force.