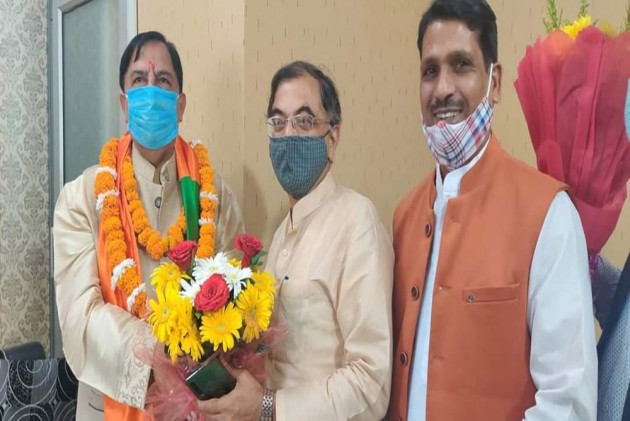 Senior BJP leader Naresh Bansal was declared elected unopposed to Rajya Sabha from Uttarakhand on Monday with no other party in contest.

Bansal was handed over the certificate of his election from the seat by Uttarakhand Vidhan Sabha Secretary Mukesh Singhal as the deadline for withdrawal of nominations came to an end here at 3pm.

The party subsequently staged a rally from the gates of the Vidhan Sabha to its state office to felicitate Bansal. However, the scale of the procession was kept modest in view of the Covid-19 pandemic, Pradesh BJP vice president Devendra Bhasin said.

Polling for the seat was scheduled to be held on November 9 but it became unnecessary as no other party fielded its candidate from the seat.

According to the constitutional norms, in circumstances like these, the lone candidate in the fray is given the certificate of election at the end of the deadline for withdrawal of nominations.

Bansal's unopposed election to the Upper House from Uttarakhand was a mere formality with the BJP having 57 out of a total of 70 seats in the state assembly and no challenger to him in the fray.

A seasoned party leader, Bansal became associated with the RSS at a very young age and occupied several important positions in the state unit of the BJP, including that of its general secretary (organisation) for seven years from 2002 to 2009.

He was also Pradesh BJP's working president during the 2019 Lok Sabha polls which saw the party retaining all the five lower house seats in Uttarakhand.