BJP Leader Pragya Thakur Gets Into Spat With SpiceJet Passengers

A video has now emerged showing irate passengers of SpiceJet having an altercation with Pragya Singh Thakur. 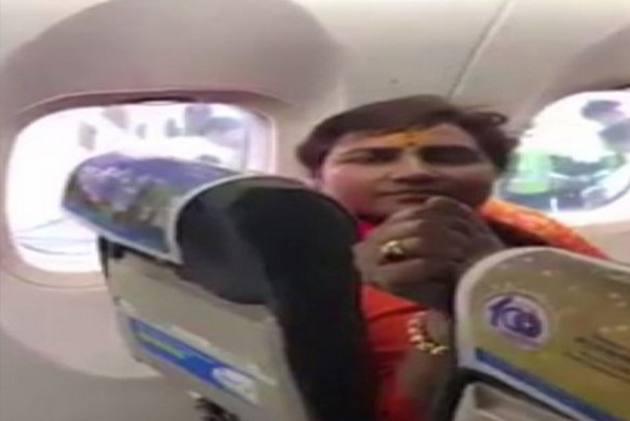 BJP leader Pragya Singh Thakur is in the news again for the wrong reason. A video has now emerged showing irate passengers of SpiceJet having an altercation with her.

In the video, a passenger can be heard telling Thakur that she is a "representative of the people and her job is not to trouble the people".

"I have told them (aircraft crew), show me your rule book. If it says I can sit here, then I will sit or else I won't," Pragya told the passengers. A fellow traveller replies: "So ma'am, if they are not able to show the rulebook...you are a representative of the people, your job is not to trouble us, you can take the next flight and come."

Passengers on Spicejet flight tell BJP MP Pragya Thakur not to cause trouble and not hold the plane at Ransom. pic.twitter.com/4VAVqRRyDt

Pragya then retorts saying if she is going without facilities in a non-first class seat, there must be a reason for that, to which the passenger says that first-class is not her right.

The passenger further told the controversial Member of Parliament that being a political leader, she should own up the responsibility when people are troubled.

"You should have the moral compass that if one person is troubled because of you...you should own up, because you are a leader. You are not ashamed that you have held around 50 people to ransom," the passenger added.

SpiceJet was at the receiving end of Thakur's ire on Saturday evening as she created a scene and registered her protest over being ill-treated by the airline's staff at the local airport after her flight from Delhi.

The 49-year old MP said in Bhopal: "I have told the authorities... Spice Jet flight staff does not behave properly with the passengers. Their conduct was not proper earlier too. I had the same complaint today...They did not give me the allotted seat. I asked them to show the rule book. I called the director and lodged the complaint with him."

Reacting to BJP MP Pragya Singh Thakur's complaint and protest over "ill-treatment", budget airline SpiceJet on Sunday said it regretted the inconvenience faced by the MP. It, however, said safety of passengers is of utmost importance for the airline.

In its clarification, the airline said Thakur was not allowed to sit on the pre-alloted seat as it was in the first row -- the emergency row -- where seats are not allocated to passengers on wheelchairs. The airline said its staff was not aware that she was wheelchair-bound and that she had not booked the wheelchair through the airline and had come on her own wheelchair.